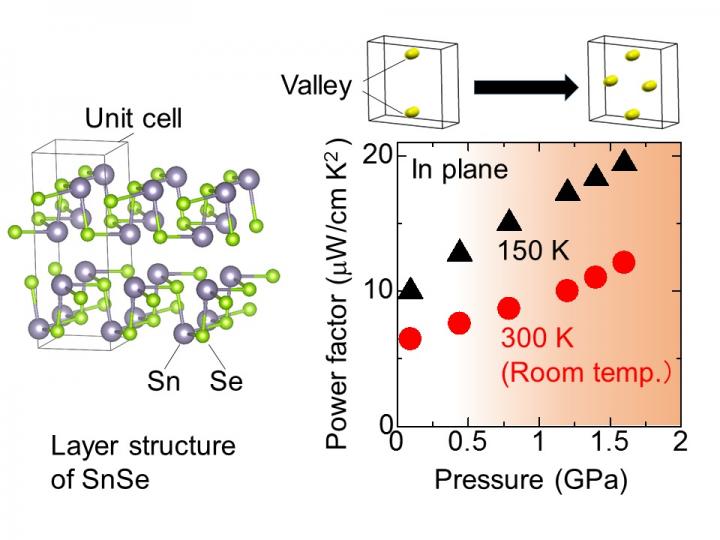 (Left) Schematic of the layered crystal structure of SnSe. (Right) Pressure dependence of thermoelectric power factor at 150 K and 300 K for SnSe. Inset shows the schematic illustration of the corresponding change in valley topology in SnSe.

Osaka, Japan - Researchers at Osaka University have been able to enhance the power factor of a promising thermoelectric material by more than 100% by varying the pressure, paving the way for new materials with improved thermoelectric properties. Thermoelectric materials have the unique ability to generate electricity from temperature differences and therefore could potentially be used to convert otherwise wasted heat (such as heat from hot laptops or servers) into usable electricity.

The researchers studied tin selenide (SnSe), a thermoelectric material that is also a semiconductor with a small amount of conducting carriers. In semiconductors the lower energy valence band is filled with electrons whereas the higher energy conduction band is empty of them; once some impurities and/or chemical defects are introduced, conducting carriers are introduced as electrons and holes in the conduction and valence bands, respectively, and the semiconductor will behave like a conductor. Apart from having an effect on the material's electrical conduction properties, the band structure also has an effect on quantum phenomena, such as their thermoelectric abilities. The valence bands of tin selenide are not completely flat, but normally have two valleys in them.

"When we increased the pressure on the material, we observed a change from two to four valleys in the material when the Lifshitz transition occurred," Hideaki Sakai says. The researchers were able to show both experimentally and theoretically that this change in the number of valleys was directly responsible for significantly improving tin selenide's thermoelectric properties.

The results of the study may help prepare improved thermoelectric materials in the future and could also help clarify the effect of the Lifshitz transition on various transport properties, leading to potential applications such as novel electronics utilizing valley degrees of freedom in the band structure.