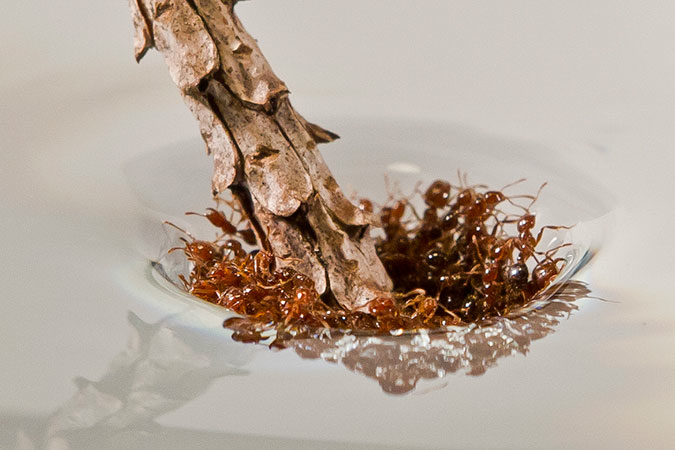 The collective dynamics of the fire ants reveal a number of novel cohesive properties beyond energy dissipation. In this figure, the entangled mass takes on hydrophobic properties, which also allows the ants to survive floods

U.S. Army-sponsored researchers at Georgia Tech have discovered a process for simultaneously storing and dissipating energy within structures that could lead to design rules for new types of active, reconfigurable materials for structural morphing, vibration attenuation and dynamic load mitigation.

In particular, researchers examined how a species of South American fire ants collectively entangle themselves to form an active structure capable of changing state from a liquid to a solid when subject to applied loads. An ant's swarm intelligence leading to continual construction could also be applied to modular robotics research or possibly inspire new methods for actively reconfiguring interconnections in complex networks.

The team includes Jet Liu, an undergraduate at Georgia Tech; Sulisay Phonekeo, a graduate student; and their supervisor David Hu, who is an assistant professor of mechanical engineering and biology. They presented their work at two separate conferences – APS Division of Fluid Dynamics in November 2013, and at the Society of Integrative and Comparative Biology Meeting, which was held in January, 2014.

Although all of the experiments were done at Georgia Tech, Hu explained that the directions of the research stem from "many useful conversations" between himself and Dr. Samuel Stanton, program manager at ARO.

"This has potential to influence studies in self-healing materials," said Hu. "Such materials are the basis for almost all living things, such as skin and tissue, which repair themselves when injured. This behavior could cheapen costs and make products lasts longer."

Stanton further explains the testing that led to the discovery.

"In oscillatory tests, the live ants revealed a rare behavior in which energy was simultaneously stored and dissipated to the same degree. Moreover, the structure was resilient over 3 orders of magnitude in frequency and 2 orders of magnitude in strain. This robust response is not describable by existing fluid or solid mechanics theories and the phenomenon has never been seen in any other active matter such as bacteria films or liquid crystals," explained Stanton. "This could lead to principles and algorithms for synthetic materials capable of actively and continually responding to external forces without need for centralized controllers."

The study has the potential to aid in the building of robots and self-healing materials.

"This understanding of ants is already at play in a new project on ant bridges," said Hu. "The team discovered that vibration stimulates ants to repair their own bridges. This repair relies upon the bridge's ability to shrink in length and increase in stiffness, becoming a stronger structure."

When asked what can be learned from this discovery and how it might help the military, Stanton said, "Aside from materials and robotics applications previously mentioned, the fundamental principles shed light on how one might dynamically alter interconnections among subsystems to direct the flow of energy and entropy within networks to achieve desired macroscopic properties."