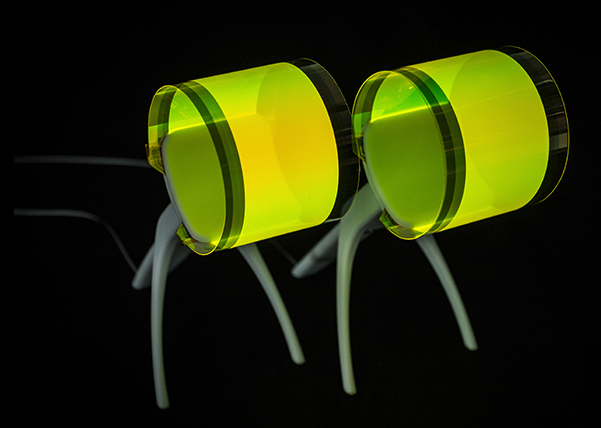 Demonstration objects from the Insect Project

The flex+ Project, funded by the German Federal Ministry of Education and Research (BMBF), has successfully come to the end of ist planned two-year duration and will leave its mark on the future as well: flexible electronics as a comprehensive approach.

Fraunhofer FEP is one of the leading research and development partners in the field of flexible organic electronics and together with its several partners in the BMBF-funded flex+ Project has pioneered new paths in the design and development of flexible organic electronics, as well as charting the way for new applications and markets.

Flexible electronics are light-weight, pliable, transparent, scalable and sustainable. Thanks to their diverse properties, they offer characteristics and advantages for completely new and innovative ideas and applications that will be supported and implemented from conception to completed components by a Technology Platform developed during the project.

Flexible electronics can produce a device with all the characteristics needed: flexible as plastic film or a piece of cloth, with no discrete components or ICs, light-weight, thin, energy-efficient, sustainable, manufactured as a single piece, and with no interfaces or mechanically vulnerable connector technology. Input, processing, output, sensors & actuators, power supply, and networking – all are integrated in this module that works everywhere and everywhen. A device like this could even be a personal computer in the form of a film atop the working surface in the laboratory or kitchen just for wiping it down. It could be a health-monitoring system in a T-shirt, a media player in a fashionable scarf or shawl, carpeting that functions as a Smart Home control including illumination, or the complete dashboard of a motor vehicle constructed as a light-weight module whose shape and curvature can be adapted to the imagination of the designer and the designated space.

The flex+ Technology Platform should help flexible organic electronics break into the market. The goal of the flex+ Project was to develop a comprehensive approach for successful development and manufacturing of flexible electronics. This was achieved through an organizational structure that was “Open Innovation” in character.

A portal resulted that makes available an Open Tech Base comprising a wiki about flex+, and an Open Tech Lab for shared utilization of existing infrastructure and technologies, bringing together idea generators, companies, technology suppliers, and other players for projects such as tech transfer, and jointly working on problems and projects in the area of flexible organic electronics.

Diverse advantages have resulted from the Open Innovation approach, such as the shared development of keystone technologies, rationalization of R & D costs, targeted development of flexible electronics, and access to technology suppliers and infrastructure.

Flex-MED – a competition for ideas with foresight

To develop targeted solutions in the fields of medicine and health care, a competition for ideas named “flex-MED” was initiated under the flex+ project. Creative and clever competitors – innovative thinkers, experts and laypeople alike, individuals and companies were all able to submit their ideas and sketches by July 2016 as answers to the question: “Healthier thanks to flexible electronics – how can this technology revolutionize health care?” The response was overwhelming. A total of over 70 ideas were received on the topic, which meanwhile have been made available in the form of an idea book. The best three suggestions were debuted by Fraunhofer FEP during the 4th Industry Partners Days in September. And not just the three winners of the competition were pleased, because specific projects will continue to be developed from all of the ideas submitted.

To this end, scenario workshops were conducted by the flex+ consortium in Dresden and Munich in order to jointly develop futuristic scenarios that were as concrete as possible and involved idea generators, interested parties, and companies from the field of medical engineering.

Project manager Dr. Christian Kirchhof viewed this enthusiastically: “We laid the foundation for open and energetic cooperation through the workshops.”

In the end, six specific project and product ideas were worked on in project teams and continuously refined. As a final step, the project scope and specific terms of reference needed for realizing the ideas were defined.

Besides the focus on specific ideas for utilization of flexible electronics in medicine and health care, an additional approach was taken in the flex+ Project. The open question posed was how the possibilities offered by flexible electronics could be vividly and realistically brought more closely to the public eye without an object emphasizing a single direction, application, or application niche.

Fraunhofer FEP, together with the Fraunhofer Institute for Applied Polymer Research IAP, Organic Electronics Saxony OES, and Mareike Gast & Kathi Stertzig Industrial Design jointly realized an impressive series of demonstration objects in the “Insect Project” that incorporated these criteria. The members of the artificial species merge the unique aesthetics of insects with the technological potential of flexible electronics to create fascinating demonstration pieces. This allowed the diverse possibilities to be directly experienced. Musca noctis and Papilio lunae represent the beginning of interdisciplinary research into insects, the goal of which is to discover and delineate the opportunities offered by flexible electronics and to communicate its diverse range.

The initial specimens of these insects were debuted in Munich at the LOPEC trade fair in March 2016. The world of flexible organic electronics was fundamentally analyzed during the two-year flex+ Project and a broad network of innovators, entrepreneurs, companies, technologists, and additional partners were brought together. The initial promising sketches, demonstration pieces, and Open Innovation Platforms emerged. The flex+ Platform continues to be available for the ongoing activities, preservation, and expansion of the network, and is being supported by the Project’s partners.