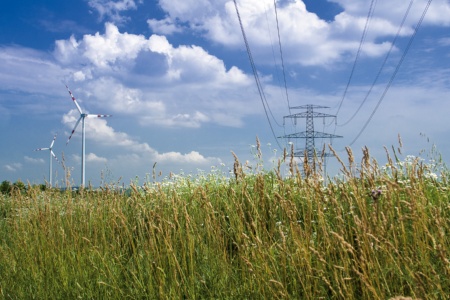 A German research team has explored the technological basis for reducing the energy losses in power grids and electric devices by more than half. This can be made possible through the use of direct current (DC). DC allows for smaller power losses when compared to the alternating current (AC) used today. The five project partners from industry and science investigated the foundations of a semiconductor-based and completely electronic circuit breaker that can be used for future DC power grids and applications. Such a circuit breaker will enable to use direct current wherever alternating current is used today.

The new circuit breakers will be able to switch on direct current as quickly and safely as possible and, in case of emergency, switch it off quickest possible. They will enable to more efficiently feed electric energy from regenerative sources into power grids and energy storage and improve grid stability. With direct current it will also be possible to build much more compact electric devices. Infineon Technologies AG had the team lead and worked on the circuit breakers together with Airbus, E-T-A Elektrotechnische Apparate GmbH, Siemens AG and the University of Bremen’s Institute for Electrical Drives, Power Electronics, and Devices (IALB). The European Center for Power Electronics e.V. (ECPE) provided further support. The ECPE is headquartered in Nuremberg, Germany.

In the past, the lack of efficient and cost-effective circuit breaker technologies has made it impossible to convert distribution grids and board nets for electromobility to direct current. The only electromechanical circuit breakers available today implicate the risk of arcing when switching direct current and voltages. Furthermore, they are slow to react, heavy, unwieldy and expensive.

Among other things the project partners explored innovative semiconductor components such as the Over Current Blocking Field Effect Transistor (OCB-FET). New structure and connection technologies were formulated and tested as well as new switching topologies. The team built demonstrators for the project results in the areas of on-board aviation grids, electromobility and photovoltaics as well as for direct current distribution networks.

Within the project, the IALB handled investigation and simulation of novel semiconductor structures for use in the OCB-FETs, static and dynamic measurement of the newly developed circuit breakers and testing their thermal behavior and destruction limits. Airbus defined the requirements from an aviation point of view and developed a solution concept which was realized and demonstrated together with the NEST-DC partners.

Siemens concentrated on the structure and connection technologies of the circuit breakers. E-T-A Elektrotechnische Apparate defined the requirements for industrial applications and, together with the partners, validated the circuit breakers for voltage classes up to 1,500 V. Infineon contributed its power semiconductor expertise and researched power semiconductors intended for use in the OCB-FETs.

NEST-DC abbreviates the German for “Innovative Electronic Direct Current Circuit Breakers for Renewable Energies and On-Board Power Networks”. The research partners invested approximately Euro 4.5 million during the course of the project. The project began in October 2013 and ran for three years. The German government set itself a goal of more efficiently using power in the future through the use of innovative power electronics. The German Federal Ministry of Education and Research (BMBF) is funding multidisciplinary research and development in the context of the ICT 2020 framework program on the topic of “Power Electronics for Increasing Energy Efficiency”. NEST-DC received approximately Euro 2.1 million in support from the BMBF.