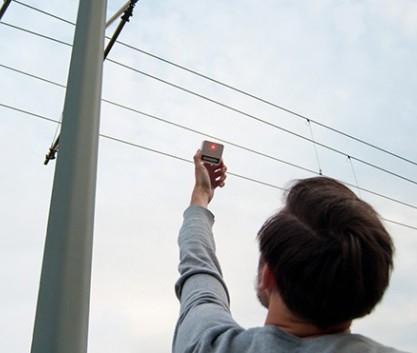 A German student has built an electromagnetic harvester that recharges an AA battery by soaking up ambient, environmental radiation. These harvesters can gather free electricity from just about anything, including overhead power lines, coffee machines, refrigerators, or even the emissions from your WiFi router or smartphone. Dennis Siegel, of the University of Arts Bremen, does away with the charging pad, but the underlying tech is fundamentally the same. We don't have the exact details — either because he doesn't know (he may have worked with an electrical engineer), or because he wants to patent the idea first — but his basic description of "coils and high frequency diodes" tallies with how wireless power transfer works. In essence, every electrical device gives off electromagnetic radiation — and if that radiation passes across a coil of wire, an electrical current is produced. Siegel says he has produced two versions of the harvester: One for very low frequencies, such as the 50/60Hz signals from mains power — and another for megahertz (radio, GSM) and gigahertz (Bluetooth/WiFi) radiation. ExtremeTech