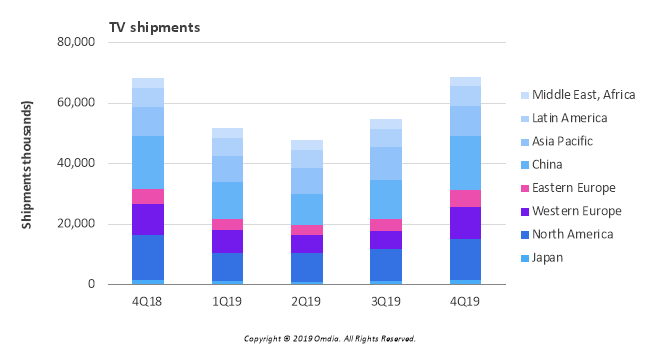 Defying a host of headwinds, the global television market managed to attain slight growth in the fourth quarter and for the entire year of 2019, as an easing in a shortage of LCD panels helped propel the market’s expansion.

Global TV set shipments in the fourth quarter of 2019 totaled 68.6 million, a 1.5 percent increase from the same period in 2018, according to the Omdia Global Flat Panel TV Shipments and Ranking report. The fourth-quarter increase helped the TV market expand by 0.7 percent during the year, with shipments rising by 0.7 percent for 2019 as a whole.

“If there ever was a year that the television market would be expected to suffer a decline, it would be 2019, when the global industry faced a range of business, economic and trade challenges,” said Paul Gray, research director at Omdia. “TV makers in 2019 contended with major issues including trade tariffs and weak demand from important regions. Despite that, some TV makers managed to find growth by capitalizing on low LCD panel prices and tapping into new regions.”

China and North America face TV struggles
China had a poor year in 2019, with shipments down 1.4 million unit to total 53.1 million. This decline was all the more surprising considering that prices fell rapidly in 2019. North America also experienced falling shipments, as TV supply was hit by the United States’ imposition of a 15 percent extra tariff on imports from China.“The year 2019 was dominated by supply issues,” Gray said. “‘In the first half of the year, brands undertook actions to ship televisions into the United States before the imposition of tariffs. In the second half, Chinese TV brands refocused on other regions as U.S. shipments were choked by the tariffs. Europe and Asia-Pacific saw heightened competition as they sought to carve out new business.”

TV market moves to China
The year 2019 also saw the realignment of the supply chain, with new LCD fabs in China coming online, bringing a severe oversupply of TV-size LCD panels. As a result, Samsung and LG both announced their intention to cease production of LCD panels for TVs in Korea. The supply chain in the future will become concentrated in China.

UHD takes majority of shipments
In terms of features, almost 60 percent of sets shipped in the fourth quarter had Ultra-High Definition (UHD) resolutions, with North America at over 70 percent and Western Europe near to that level. China was third at 63 percent. Only Asia-Pacific and the Middle East and Africa had a UHD shipment share of less than 50 percent, due to consumer preference for smaller (non-UHD) screen sizes.

“Televisions with 8K resolution remain a novelty for consumers, with their high prices and scarcity of content weighing heavily against growth,” Gray said.

OLED and quantum-dot LCD technologies battle for dominance
Looking at display technology, Organic Light-Emitting Diode (OLED) televisions returned to strong growth in the fourth quarter. However, quantum dot LCD TVs (QD-LCD) posted an even larger expansion, rising by 90 percent quarter-on-quarter due to robust shipments from Samsung. QD-LCD shipments were more than double those of OLED.