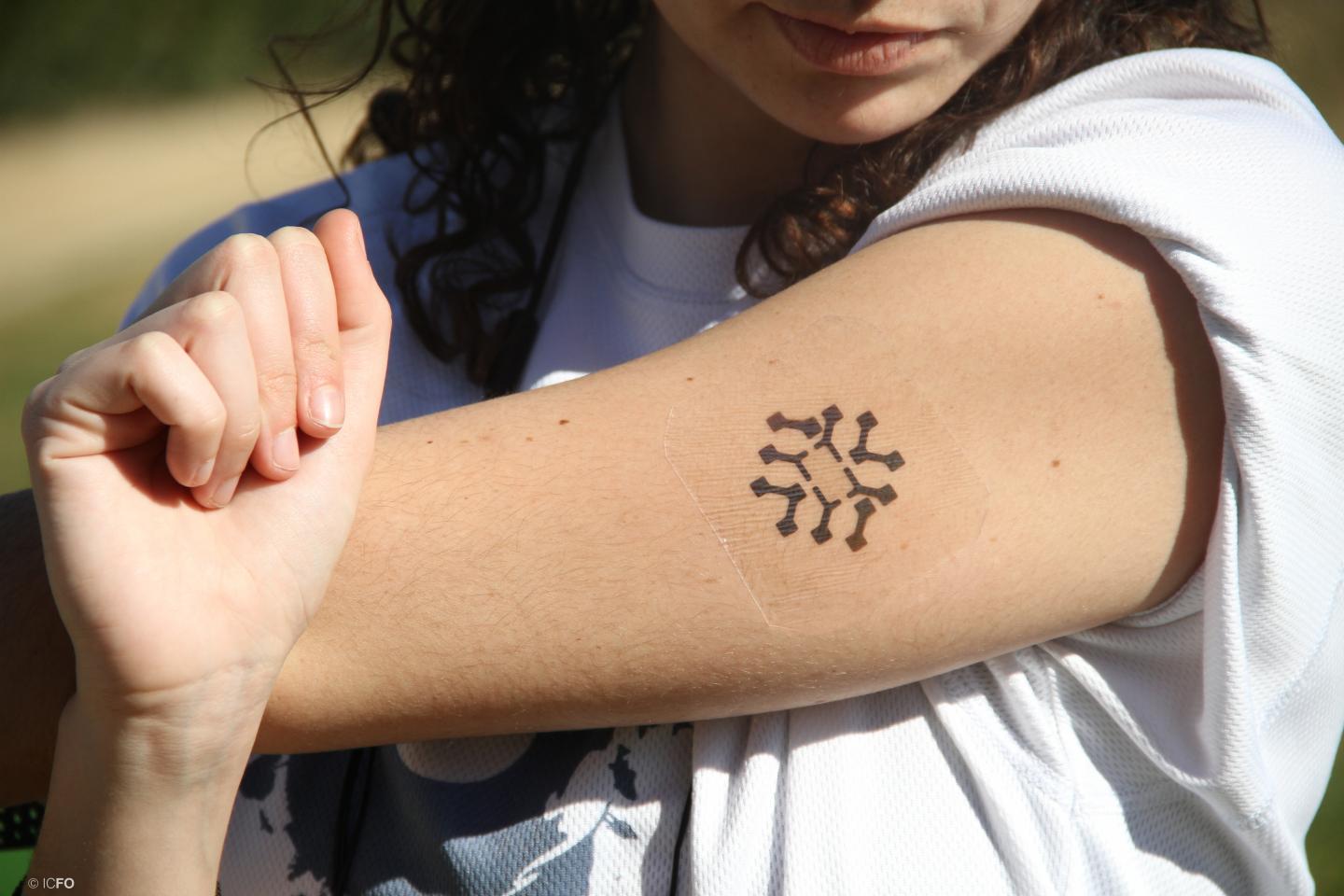 The first of ICFO's devices on display will allow customers to monitor their level of exposure to sunlight through a UV sensor. Designed as a flexible, transparent and disposable patch, it connects to a mobile device and alerts the user once he or she has reached a defined threshold of sun exposure.

Using the same core technology as the UV patch, ICFO's fitness band is being developed to measure heart rate, hydration, oxygen saturation, breathing rate and temperature, while monitoring the user when he or she is exercising, for example. However, the fitness band does more than simply measure physical activity.

Consider the following scenario. A person is trekking in the remote amazon jungle with limited access to water. By measuring the skin hydration of their body with ICFO's fitness band, the user can optimize water intake, preventing any sort of dehydration. Similarly, an explorer hiking to the peak of mount Everest could use the band to accurately monitor oxygen saturation in blood. The high altitude can severely effect oxygen saturation in the body. Using the band, the hiker could monitor these levels and emit a warning if oxygen saturation in the blood decreases drastically below a certain level.

In addition to these prototypes being exhibited at MWC 2019, ICFO will also showcase two other light-based graphene technologies. These include the world's smallest single pixel spectrometer and a graphene-enabled hyperspectral image sensor, both with broadband capabilities, beyond to what was once perceived possible without the use of costly and bulky photodetection systems.

By enabling spectroscopy in such small dimensions, consumers could now be equipped with tools that previously were only available to highly specialised laboratories. From the detection of counterfeit drugs to the identification of harmful substances within a product that we use or food that we eat, compact, low-cost spectrometers could become an indispensable accessory of our everyday life.

"Built into a smart phone camera, the graphene-based camera sensor allows phones to see more than what's visible to the human eye," comments Frank Koppens, group leader at Graphene Flagship partner ICFO, and Chair of the Graphene Flagship MWC Committee. "Made up of hundreds of thousands of photodetectors, this incredibly small sensor is highly sensitive to UV and infrared light."

"This technology would allow users in the supermarket to hold the camera to fruit and infer which is the freshest piece. Or, in a more extreme example, the camera could be used for driving in dangerously dense fog by providing augmented outlines of surrounding vehicles on the windscreen."

To find out more about these technologies and to meet the team of experts that have developed these applications, visit the Graphene Pavilion at MWC in NEXTech Hall 8.0 Stand 8.0K31 on February 25-28.

For further information on the Graphene Pavilion, visit http://bit.ly/GrapheneMWC or e-mail press@graphene-flagship.eu.