Graphene on the way to Superconductivity 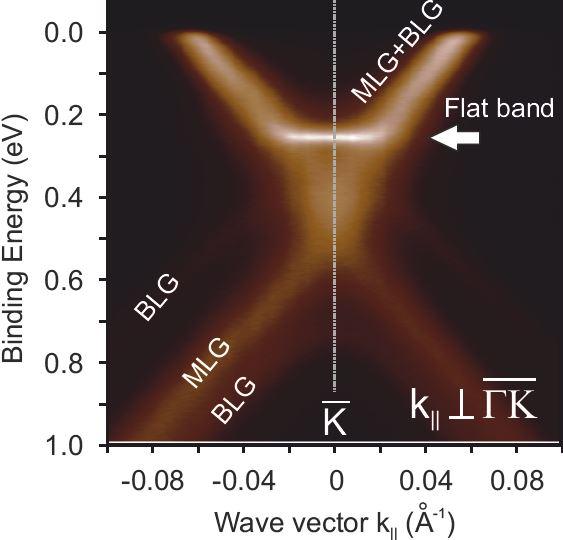 The bandstructure in a double layer of graphene was scanned by ARPES at synchrotron light source BESSY II.

Carbon atoms have diverse possibilities to form bonds. Pure carbon can therefore occur in many forms, as diamond, graphite, as nanotubes, football molecules or as a honeycomb-net with hexagonal meshes, graphene. This exotic, strictly two-dimensional material conducts electricity excellently, but is not a superconductor. But perhaps this can be changed.

A complicated option for superconductivity

In April 2018, a group at MIT, USA, showed that it is possible to generate a form of superconductivity in a system of two layers of graphene under very specific conditions: To do this, the two hexagonal nets must be twisted against each other by exactly the magic angle of 1.1°. Under this condition a flat band forms in the electronic structure. The preparation of samples from two layers of graphene with such an exactly adjusted twist is complex, and not suitable for mass production. Nevertheless, the study has attracted a lot of attention among experts.

The simple way to flat bands

But there is one more, much simpler way of flat band formation. This was shown by a group at the HZB around Prof. Oliver Rader and Dr. Andrei Varykhalov with investigations at BESSY II.

The samples were provided by Prof. Thomas Seyller, TU Chemnitz. There they are produced using a process that is also suitable for the production of larger areas and in large quantities: A silicon carbide crystal is heated until silicon atoms evaporate from the surface, leaving first a single-layer of graphene on the surface, and then a second layer of graphene. The two graphene layers are not twisted against each other, but lie exactly on top of each other.

Scanning the band structure with ARPES

At BESSY II, the physicists are able to scan the so-called band structure of the sample. This band structure provides information on how the charge carriers are distributed among the quantum-mechanically permitted states and which charge carriers are available for transport at all. The angle-resolved photoemission spectroscopy (ARPES) at BESSY II enables such measurements with extremely high resolution.

An interesting region under scrutiny

Via an exact analysis of the band structure, they identified an area that had previously been overlooked. "The double layer of graphene has been studied before because it is a semiconductor with a band gap," explains Varykhalov. "But on the ARPES instrument at BESSY II, the resolution is high enough to recognize the flat area next to this band gap."

"It is an overseen property of a well-studied system", first author Dr. Dmitry Marchenko points out: "It was previously unknown that there is a flat area in the band structure in such a simple well-known system."

The physicists have found that the interactions between the two graphene layers and between graphene and the silicon carbide lattice are jointly responsible for the formation of the flat band area. "We can predict this behavior with very few parameters and could use this mechanism to control the band structure," adds Oliver Rader.