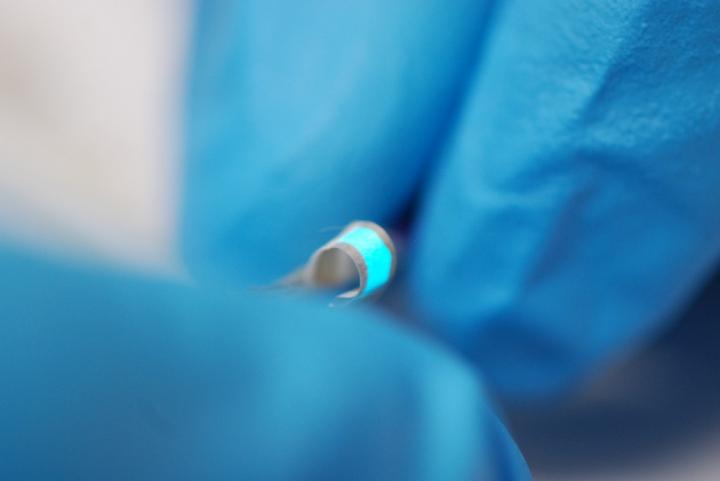 The quest to create affordable, durable and mass-produced 'smart textiles' has been given fresh impetus through the use of the wonder material Graphene.

An international team of scientists, led by Professor Monica Craciun from the University of Exeter Engineering department, has pioneered a new technique to create fully electronic fibres that can be incorporated into the production of everyday clothing.

Currently, wearable electronics are achieved by essentially gluing devices to fabrics, which can mean they are too rigid and susceptible to malfunctioning.

The new research instead integrates the electronic devices into the fabric of the material, by coating electronic fibres with light-weight, durable components that will allow images to be shown directly on the fabric.

The research team believe that the discovery could revolutionise the creation of wearable electronic devices for use in a range of every day applications, as well as health monitoring, such as heart rates and blood pressure, and medical diagnostics.

The international collaborative research, which includes experts from the Centre for Graphene Science at the University of Exeter, the Universities of Aveiro and Lisbon in Portugal, and CenTexBel in Belgium, is published in the scientific journal Flexible Electronics.

Professor Craciun, co-author of the research said: "For truly wearable electronic devices to be achieved, it is vital that the components are able to be incorporated within the material, and not simply added to it.

Dr Elias Torres Alonso, Research Scientist at Graphenea and former PhD student in Professor Craciun's team at Exeter added "This new research opens up the gateway for smart textiles to play a pivotal role in so many fields in the not-too-distant future. By weaving the graphene fibres into the fabric, we have created a new technique to all the full integration of electronics into textiles. The only limits from now are really within our own imagination."

At just one atom thick, graphene is the thinnest substance capable of conducting electricity. It is very flexible and is one of the strongest known materials. The race has been on for scientists and engineers to adapt graphene for the use in wearable electronic devices in recent years.

This new research used existing polypropylene fibres - typically used in a host of commercial applications in the textile industry - to attach the new, graphene-based electronic fibres to create touch-sensor and light-emitting devices.

The new technique means that the fabrics can incorporate truly wearable displays without the need for electrodes, wires of additional materials.

Professor Saverio Russo, co-author and from the University of Exeter Physics department, added: "The incorporation of electronic devices on fabrics is something that scientists have tried to produce for a number of years, and is a truly game-changing advancement for modern technology."

Dr Ana Neves, co-author and also from Exeter's Engineering department added "The key to this new technique is that the textile fibres are flexible, comfortable and light, while being durable enough to cope with the demands of modern life."

In 2015, an international team of scientists, including Professor Craciun, Professor Russo and Dr Ana Neves from the University of Exeter, have pioneered a new technique to embed transparent, flexible graphene electrodes into fibres commonly associated with the textile industry.