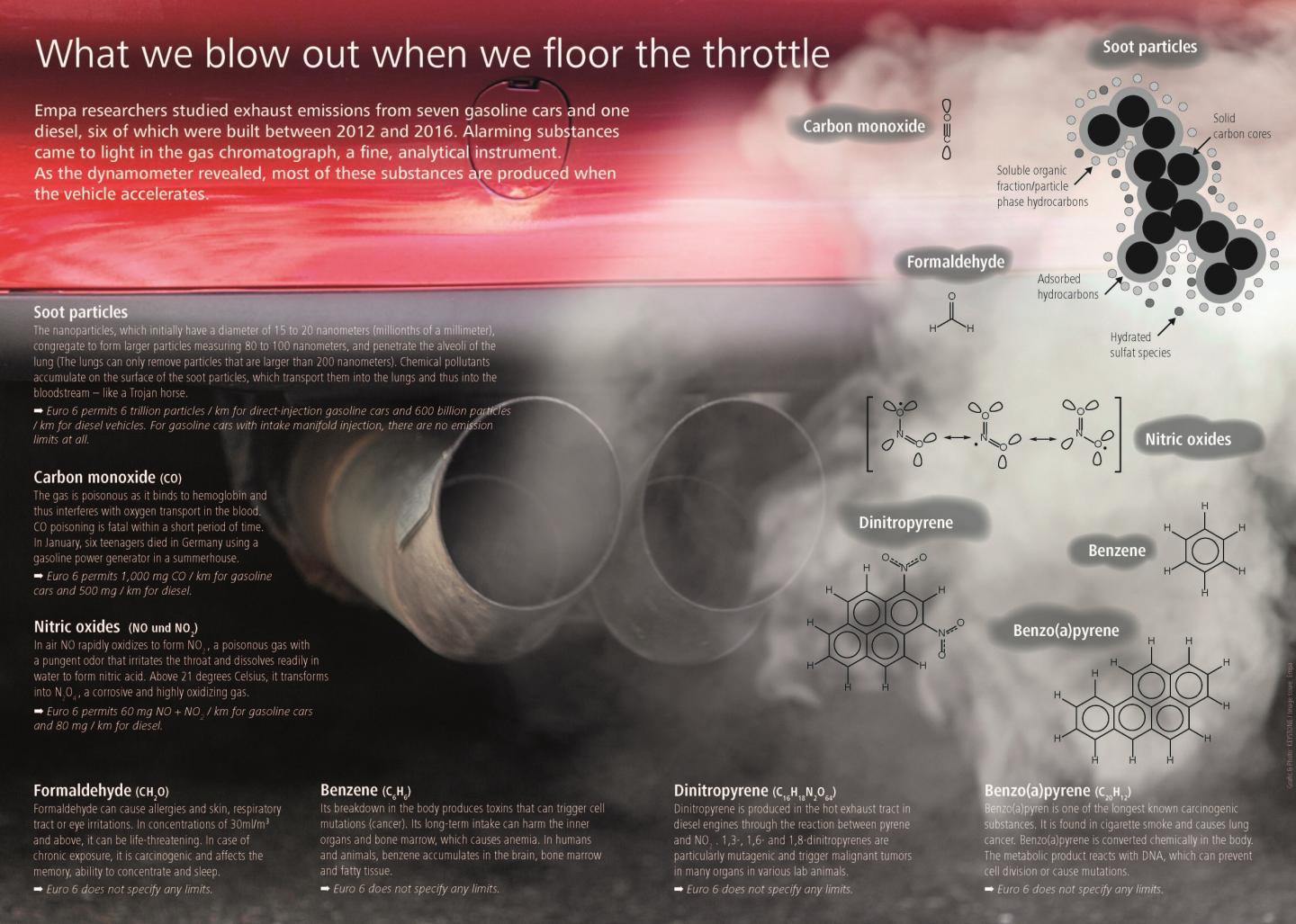 Gasoline direct injection (GDI) engines are sold in growing numbers worldwide. In Europe around 50 million GDI cars are expected to be on the road by 2020. The technology owes its success to a significant increase in engine power, even in small engines. This year's winner of the Swiss Aerosol Award, Maria Muñoz from Empa, has investigated the emissions of GDI engines together with a team of scientists and engineers from industry and research as part of the GASOMEP project, led by Empa researcher Norbert Heeb. For comparison, a diesel vehicle with state-of-the-art particle filter technology was also tested. The results of the study are alarming: All tested GDI vehicles - they were built between 2001 and 2016 - produced genotoxic exhaust gases. The carcinogenic potential of these exhaust gases was up to 17 times higher than that of the investigated diesel vehicle.

A Trojan horse that affects your health

The health hazards by GDI engines are, therefore, significantly higher than the ones posed by modern diesel cars, all of which are already equipped with particle filters. The health risks are increased by the interaction of soot particles with carcinogenic exhaust components: The unfiltered GDI exhaust gases contained up to 1,000 times more particles and 20 times more genotoxic PAHs (polycyclic aromatic hydrocarbons) than exhausts of a Euro 5 diesel vehicle equipped with a standard filter. Similar to a Trojan horse, the soot particles then transport their cargo inside the body: When inhaled, the particles transport the carcinogenic substances directly into the alveoli of the human lung, from where they can easily enter the bloodstream.

Since 2004, an EU directive has limited the concentration of carcinogenic benzo(a)pyrene in ambient air to 1 ng/m3. In GDI exhaust gases, benzo(a)pyrene concentrations in the new regulatory cycle (WLTC) were between 8 and 2600 ng/m3. One cubic meter of exhaust gas must thus be diluted up to 2600 times in order to maintain the ambient air limit value.

Due to the chemical composition of the exhaust gases and the high particle emissions, GDI engines are a health risk comparable to unfiltered diesel engines, and the WHO has classified unfiltered diesel exhausts as a class 1 carcinogen, which can cause lung cancer. Particle filters in GDI engines could reduce the hazards of these exhaust gases. In the meantime, the legislator has reacted: Since September 2018, newly registered GDI vehicles have to comply with the same particle limits as diesel engines. This is virtually impossible without filters. What remains problematic, however, is that all vehicles purchased before that time may continue to be driven without filters. Retrofitting is not (yet) mandatory although retrofitting of older vehicles with particle filters could drastically improve their emission behavior.

There are also significant differences in the filters themselves: The work of Maria Muñoz shows that choosing the "right" filter technology is crucial. By using the best available filter technology tt would be technically possible to reduce the current particle limit value by 90 percent.