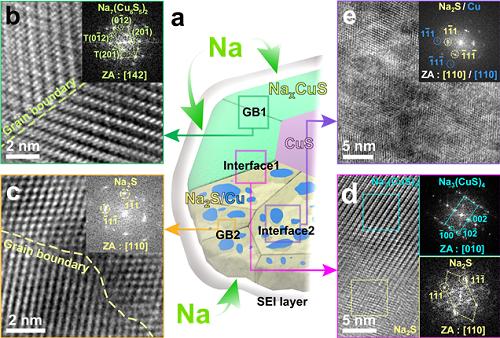 This is a schematic model demonstrating grain boundaries and phase interfaces formations.

Professor Jong Min Yuk's team confirmed the stable sodium storage mechanism using copper sulfide, a superior electrode material that is pulverization-tolerant and induces capacity recovery. Their findings suggest that when employing copper sulfide, sodium ion batteries will have a lifetime of more than five years with one charge per a day. Even better, copper sulfide, composed of abundant natural materials such as copper and sulfur, has better cost competitiveness than lithium ion batteries, which use lithium and cobalt.

Intercalation-type materials such as graphite, which serve as commercialized anode materials in lithium ion batteries, have not been viable for high-capacity sodium storage due to their insufficient interlayer spacing. Thus, conversion and alloying reactions type materials have been explored to meet higher capacity in the anode part. However, those materials generally bring up large volume expansions and abrupt crystallographic changes, which lead to severe capacity degradation.

Most of conversion and alloying reactions type battery materials usually experience severe capacity degradations due to having completely different crystal structures and large volume expansion before and after the reactions. However, copper sulfides underwent a gradual crystallographic change to make the semi-coherent interfaces, which eventually prevented the pulverization of particles. Based on this unique mechanism, the team confirmed that copper sulfide exhibits a high capacity and high cycling stability regardless of its size and morphology.