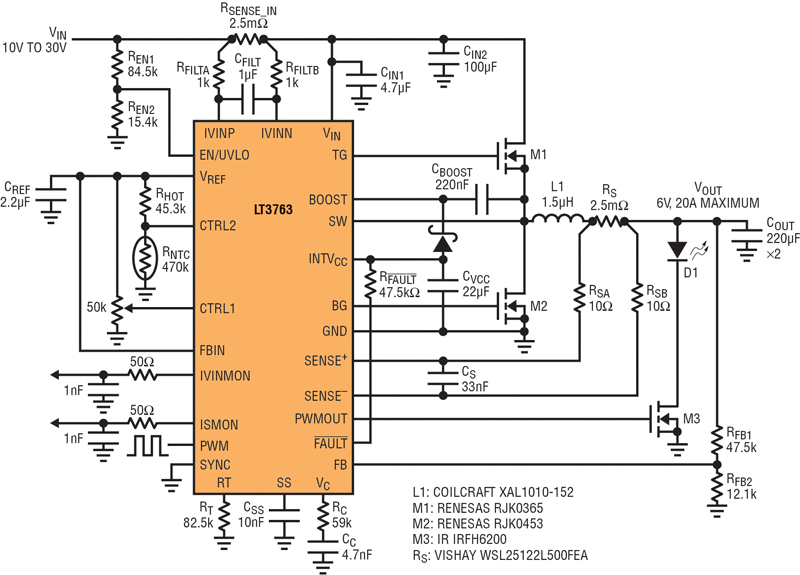 Figure 1. A single high power LED (20A) driver with analog and PWM dimming

The best LED drivers accurately regulate LED current for consistent color reproduction and modulate it rapidly for high contrast dimming. They also recognize and survive short and open circuits, monitor and report current levels, guard against overheating, and protect weak power supplies from excessive load currents. A standard switching converter would require a number of additional expensive amplifiers, references and passive components to fulfill these responsibilities. In contrast, the LT3763 LED driver-controller has these functions built in—reducing BOM costs, saving board space and improving reliability. The LT3763 is more than just a high performance LED driver. Its rich feature set simplifies the design of other demanding applications, such as safe charging of a sealed lead-acid batteries, or maximum power point regulation for a solar panel, or a combination of both. The LT3763 performs these tasks with high efficiency, even at input voltages reaching 60V. Driving LEDs Figure 1 shows the LT3763 configured as a high power LED driver. A potentiometer at the CTRL1 pin permits manual adjustment of the regulated LED current from 0 to 20A. For thermal regulation of the LED current, a resistor with a negative temperature coefficient is mounted near the LED and connected from the CTRL2 pin to GND. The resistor network at the EN/UVLO pin programs the LT3763 to shut down if the input voltage falls to less than 10V. The resistor network at the FB pin defines an open-circuit condition as when the output reaches 6V, and should that ever happen, the LT3763 automatically reduces the inductor current to prevent overshoot and pulls down the /FAULT pin to mark the occasion. 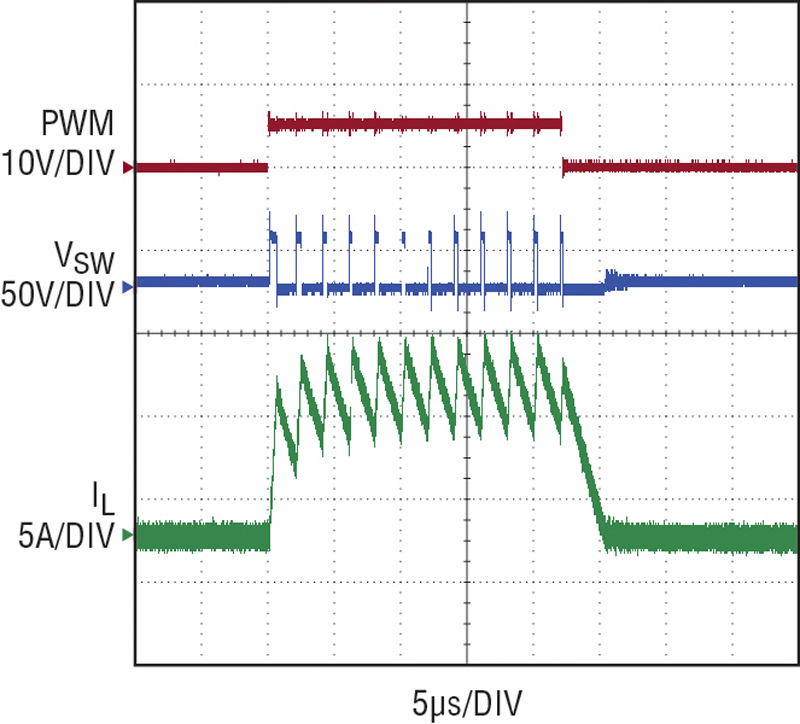 The LT3763 is designed to provide flicker-free LED dimming as shown in Figure 2. This is achieved by pulling PWMOUT low whenever PWM is low and thereby disconnecting the LED, by similarly disconnecting the compensation network at VC, and resynchronizing internal switching clocks to the PWM pulse. These maneuvers ensure that subsequent pulses are identical, that the inductor current rises as fast as possible to satisfy the programmed LED current level, and that the LED light never flickers. 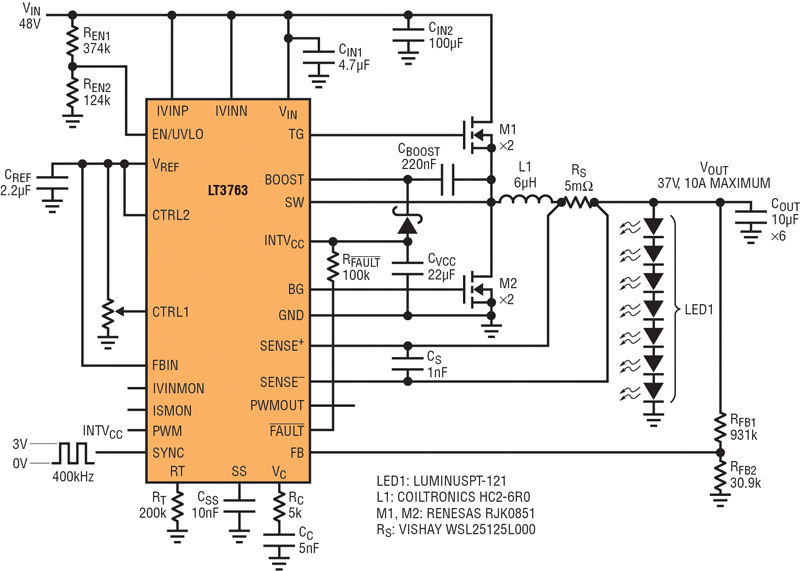 The LT3763 can be configured as in Figure 3 to deliver 350W with 98% efficiency from a 48V input. An internal regulator supplies the drivers of the TG and BG pins with enough power for each to drive two of the external NMOS power switches. Higher power applications can be built by connecting LT3763s in parallel, so that current is shared equally between the two controllers. This configuration also illustrates how the SYNC pin can be used to synchronize the parallel connected LT3763s to an external clock. 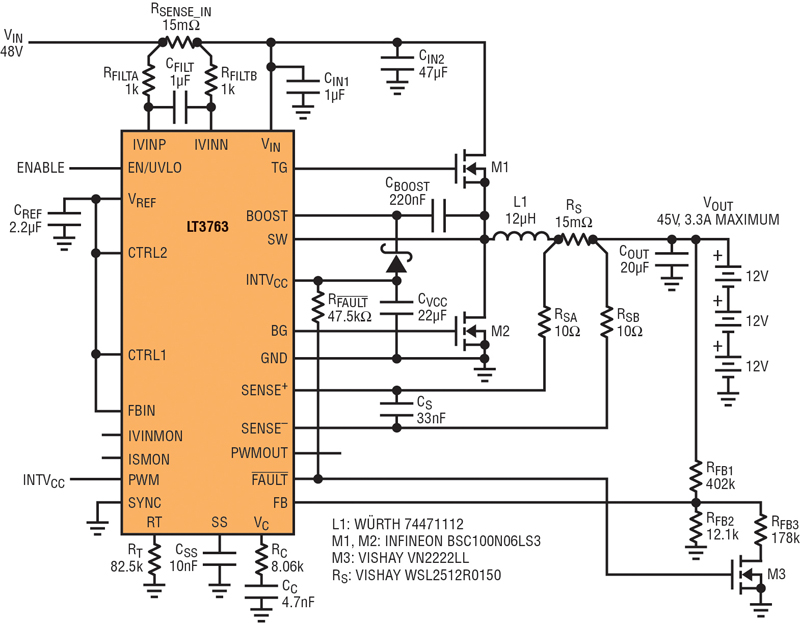 The high output voltage rating of the LT3763 enables 35V at the output with the simplicity of a standard buck converter. The output voltage can be as high as 1.5V less than input voltage, and the configuration in Figure 4 makes use of this feature to charge three sealed lead-acid batteries in series (up to 45V) from a 48V supply. Charging batteries The battery charger shown in Figure 4, like all chargers, must be able to precisely regulate the batteries' rated charging current (constant current mode) until the battery voltages reach the limit set by their chemistry. The charger must maintain that voltage (constant voltage mode) without overshoot until the current drawn by the trickle-charging batteries becomes very small. Once the trickle charge phase is complete, the charger should allow the batteries' voltages to decay to a relaxed level before finally settling at and holding that final voltage indefinitely. 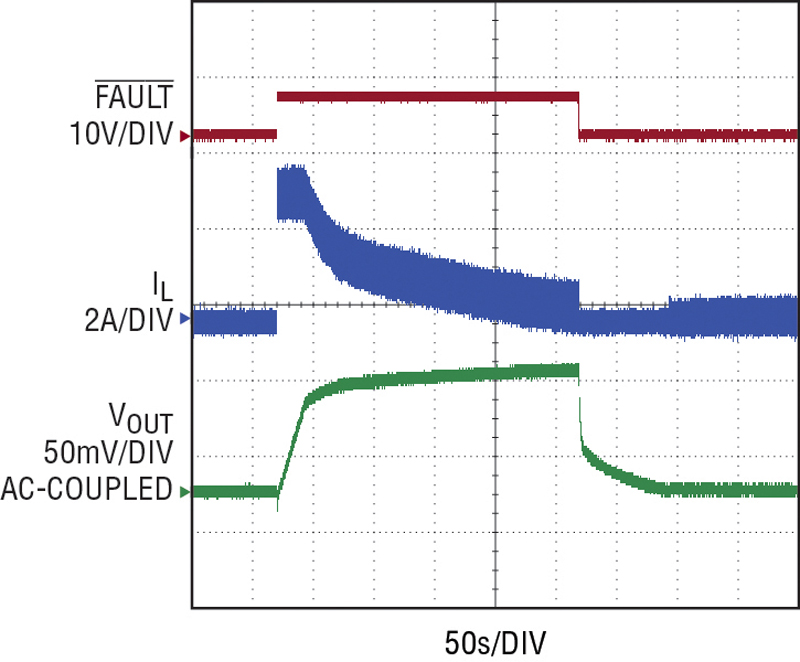 The combined current and voltage regulation loops on the LT3763, and its LED fault handling circuitry, nearly make it a complete battery charger. Only a single additional transistor is required to form a complete battery charging system. The resistor divider at the FB pin has been designed to program the charging voltage to 45V. As in the case of an open-circuit, when the voltage reaches 45V, the LT3763 automatically reduces the current to prevent overshoot as shown in Figure 5. Subsequently, during trickle charging, the battery draws less current over time. When the charging current reduces to ten percent of the regulated current (C/10 battery specification), the LT3763's open-circuit fault condition is triggered. The resulting high-to-low transition at the /FAULT pin is used to turn off the gate of the added transistor M3 and remove the resistor RFB3 from the feedback network. The programmed output voltage is thereby lowered, and the LT3763 stops switching to allow the batteries to relax on their own. When their combined voltage decays to the newly programmed value, the LT3763 begins switching again and provides a sustaining current necessary to maintain the output voltage indefinitely. As an added benefit, the /FAULT pin transition serves as a signal that the trickle charging has begun. 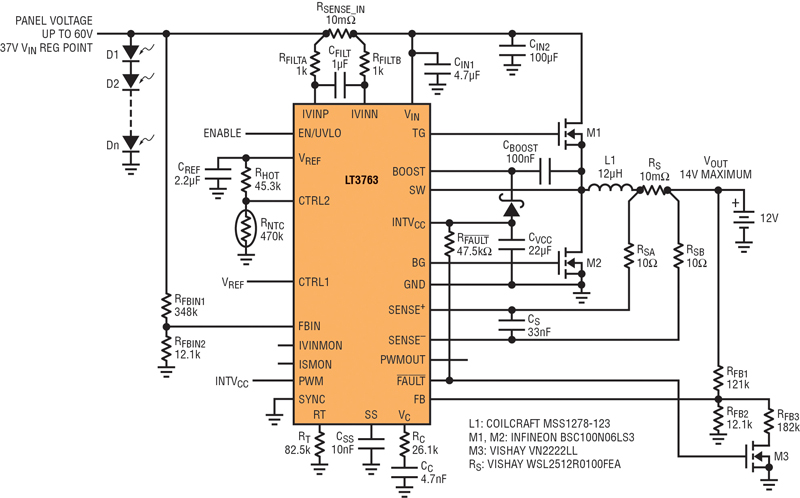 Regulating solar panels a well-designed solar panel power supply requires an intelligent combination of current and voltage regulation. In an optimum design, a converter must sense the voltage on the panel and adjust the current it draws to maintain the input voltage at the panel's maximum power point. If it draws too much current, the voltage of the high impedance panel will collapse. If it draws too little current, available light energy is essentially wasted. In many common solutions, a solar panel controller designer would use an amplifier to sense the input voltage and adjust the voltage on the current control pin. The LT3763 includes this function at the FBIN pin. Simply tie CTRL1 high, to the 2V reference available at VREF, and add a voltage divider from VIN toFBIN. When the voltage at FBIN falls to nearly 1.205V, the internal amplifier automatically overrides the CTRL1 voltage and reduces the load current. This regulates the input voltage (the voltage of the solar panel) at the maximum power point for the panel. The resistor divider on the FBIN pin is shown in Figure 6 and can be customized to fit the requirements of any solar panel. In the configuration shown in Figure 6, the converter can generate whatever inductor current, up to 5A, is required to hold the panel voltage at 37V. Input voltage feedback is via the voltage divider at the FBIN pin, which in turn regulates the inductor current to what is actually necessary to hold the panel at peak power in any given light condition. As shown in Figure 7, the process of charging a battery with a solar panel looks very similar to charging with a low impedance supply as before. The difference is that the regulated inductor current (charge current) is not preset by the designer, but is instead adjusted on the fly via the feedback loop regulating input voltage. This effectively minimizes charge time, since input power is maximized at all times, regardless of panel illumination. Since the LT3763 has the capability of regulating input voltage and current, as well as output voltage and current, and provides a fault flag with C/10, it can easily be used with a wide variety of solar panels to charge many different types of batteries. 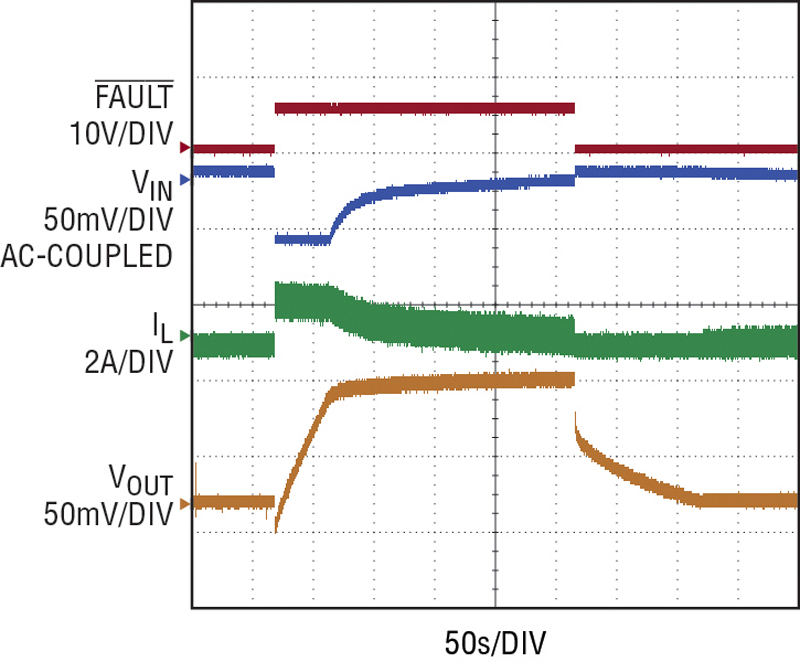 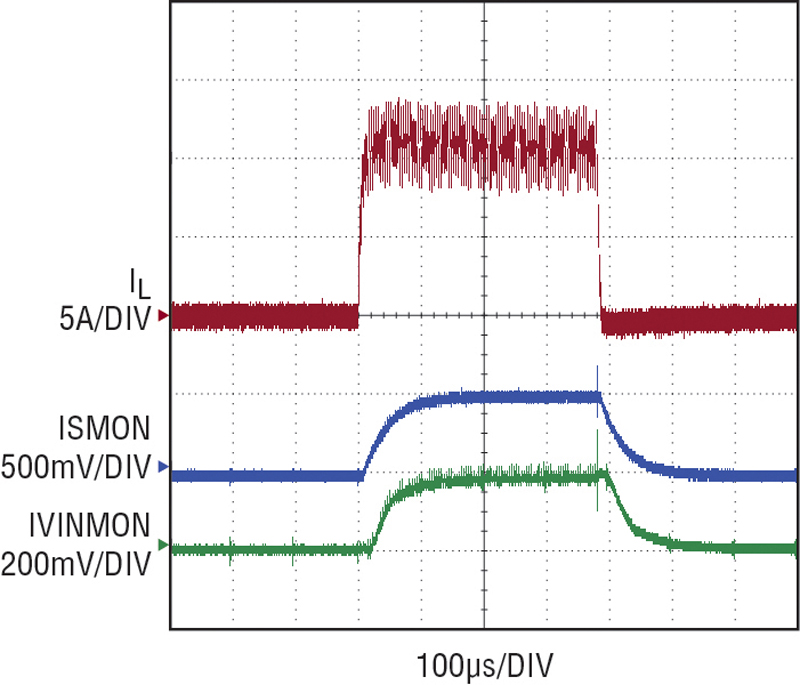 Monitoring current levels In each of the applications presented here, the LT3763 provides an additional service by monitoring the input and output current levels. Voltages across the IVINP and IVINN pins ranging from 0 to 50mV are amplified with a gain of 20, and the resulting voltage appears at the IVINMON pin. The voltage at the ISMON pin is an identical amplification of the voltage across the SENSE+ and SENSE- pins, as shown in Figure 8. These signals are helpful in systems that must verify the current provided to LEDs or measure the efficiency of voltage conversion. They can also help to estimate the power provided by a solar panel or to monitor the current trickling into a charging battery as it decays to zero. Due to the discontinuous input current of a step-down buck converter, a low-pass filter is typically necessary at the IVINP and IVINPpins as shown in Figure 1 and Figure 4. A much smaller filter at the SENSE+ and SENSE- pins may also be useful in filtering high frequency noise, but it is not necessary. Even with these filters, the monitors are fast enough to track reasonably short PWM pulses as shown in Figure 8. Nevertheless, if a designer is more concerned with average current levels than instantaneous current levels, then additional lowpass filters can be easily added to the ISMON and IVINMON pins. Feature integration The LT3763 is a versatile step-down buck converter that integrates many complex features essential for not only LED drivers, but solar harvesters and battery chargers as well. A PWM driver and current monitors are included with fault detection, current limiting, input and output voltage regulation. Due to its high voltage rating, all of these features can be utilized to illuminate long strings of LEDs or charge stacks of batteries. Available in a 28-lead TSSOP package, the LT3763 is a compact, complete, and efficient power system. Linear Technology