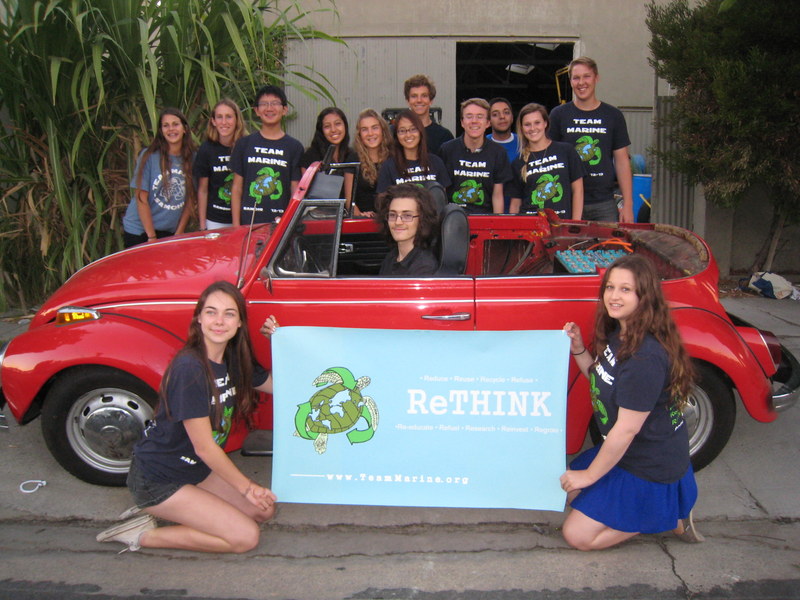 A group of Santa Monica High School students of the environmental science and advocacy group, Team Marine, finished their gas-to-electric car conversion project. Working for four years on a 1971 red convertible Volkswagen Super Beetle, the students, whose ages range from 14-18 years old, replaced the car's combustion engine and gas tank with an electric motor and 30-kilowatt hour lithium iron phosphate battery pack. The students will debut this extraordinary plug-in at the Santa Monica Alternative Car Exposition today and tomorrow, September 20-21. In coming weeks, they will conduct local tests to showcase the anticipated 100+ mile range, maximum freeway speed, and zero to 60 mph time. The car, affectionately named Volts Wattson, was donated to Team Marine by the Poon-Fear family in 2009 with the purpose of having students turn it into an environmentally conscious EV. Since then, the students have focused on acquiring funds, parts, and the knowledge needed to overcome the many electrical, mechanical and logistical hurdles in the conversion process. Team Marine has simultaneously developed an electric vehicle instruction manual along with award-winning educational materials and multi-media presentations that are designed to raise awareness about climate change, ocean acidification, energy conservation and carbon-reduction strategies. With technical and financial contributions from environmental partners Plug-In America, the Wells Fargo Foundation, Trexa, Alliance for Climate Education, QuikSCience, TeenNick, Left Coast Electric, City of Santa Monica, and Gas to Electric Conversions, Team Marine will tour Volts Wattson at many civic and community events, schools and other academic institutions, science fairs and alternative transportation exhibitions throughout Southern California. "Electric conversions are part of the solution," says Lead Student Engineer, Patricio Guerrero. "This project is an example of what is possible to achieve and hopefully inspires other engineers and scientists out there to go down the path of sustainability." "Our project shows that even high school students can do things to reduce reliance on fossil fuels," adds Ivan Morales, co-captain of last year's Team Marine. Local science teacher and Team Marine Coach, Benjamin Kay, commented, "We've built solar boats, and even watercraft made from plastic straws and bottles, but never anything like this. This was a prodigious mission, and as a teacher, I am proud beyond words of the students' achievements and so thankful to our many community partners." Team Marine, formed in 2006 by a group of environmentally conscious students to increase the public's awareness about the sensitivity of the ocean and other natural environments, has created numerous programs to mobilize the citizens of Santa Monica and nearby areas in Los Angeles to conserve and clean-up the California coastline. Their efforts have been recognized by the City of Santa Monica, TeenNick Halo Awards, The Wyland Foundation, Southern California Edison, and other environmental organizations, companies, and government officials. Team Marine