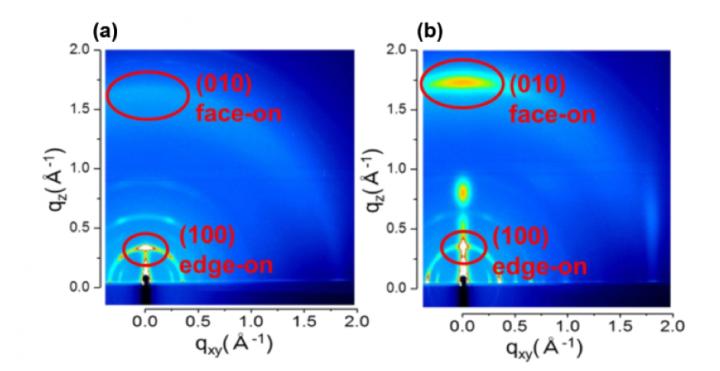 2D-GIWAXS images of DRCN5T thin films deposited on PEDOT:PSS substrates 327 (a) without and (b) with a CuI buffer layer.

Solar cells are a cost-effective, alternate source of energy. A subtype of these, organic solar cells make use of organic polymers inside the cell. Using these polymers makes the cells light-weight and increases their flexibility. Organic solar cells are produced by two different chemical methods: dry processing and wet processing, with the latter being a faster method. There are several parameters used to assess the efficiency of solar cells with absorption of light and transportation of charge being widely used.

A prevailing problem with the structure of organic cells is that molecules in the active organic layer responsible for light absorption and charge transport tend to face both towards the edges of cells, as well as towards the light absorbing substrate. Maximizing the number of molecules facing the substrate, however, is the key to maximising absorption and conductivity of the cell. Scientists have modified the dry processing method to achieve such an orientation, but it has not been possible with the wet method. The research team led by Tetsuya Taima at Kanazawa University, is the first to successfully do so.

The premise of their method is the introduction of a copper iodide (CuI) layer between the active molecules and the substrate. In their study, the researchers used a film of active molecules called DRCN5T and coated them onto either CuI/PEDOT: PSS (30 nm)/indium tin oxide (ITO) mixed substrates, or substrates without the CuI layer. The ratio of substrate facing to edge facing DRCN5T molecules was then compared between both. Subsequent high-resolution imaging revealed that the CuI containing cells had active molecules with a ten times higher substrate facing orientation, along with enhanced light absorption. The researchers attributed this altered orientation of the molecules to strong chemical interactions between the DRCN5T and CuI atoms. To further confirm this, DRCN5T molecules with bulky side chains that do not interact with CuI were used, and a higher substrate facing ratio was not seen.

This is the first study that effectively demonstrates a method of producing such efficient organic solar cells using the wet processing method. Besides saving time, the wet method also results in larger film areas. "This technique is expected to greatly contribute to the development of organic thin film solar cells fabricated by wet processing in the future", conclude the authors. Their approach paves the way for producing high-performance solar cells faster.