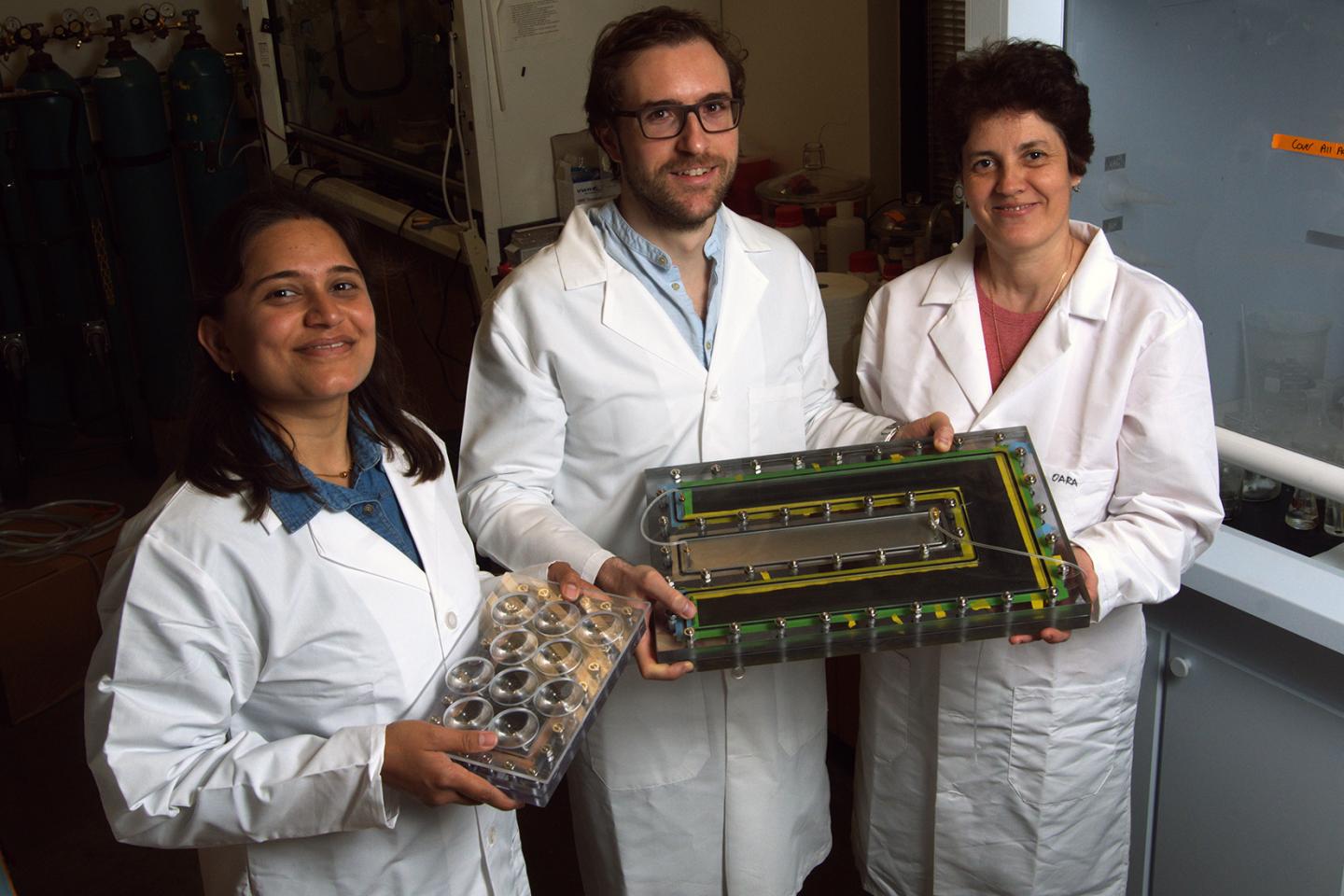 Rice University researchers (from left) Pratiksha Dongare, Alessandro Alabastri and Oara Neumann showed that Rice's 'nanophotonics-enabled solar membrane distillation' (NESMD) system was more efficient when the size of the device was scaled up and light was concentrated in 'hot spots.'

HOUSTON -- Rice University's solar-powered approach for purifying salt water with sunlight and nanoparticles is even more efficient than its creators first believed.

Researchers in Rice's Laboratory for Nanophotonics (LANP) this week showed they could boost the efficiency of their solar-powered desalination system by more than 50% simply by adding inexpensive plastic lenses to concentrate sunlight into "hot spots." The results are available online in the Proceedings of the National Academy of Sciences.

"The typical way to boost performance in solar-driven systems is to add solar concentrators and bring in more light," said Pratiksha Dongare, a graduate student in applied physics at Rice's Brown School of Engineering and co-lead author of the paper. "The big difference here is that we're using the same amount of light. We've shown it's possible to inexpensively redistribute that power and dramatically increase the rate of purified water production."

In conventional membrane distillation, hot, salty water is flowed across one side of a sheetlike membrane while cool, filtered water flows across the other. The temperature difference creates a difference in vapor pressure that drives water vapor from the heated side through the membrane toward the cooler, lower-pressure side. Scaling up the technology is difficult because the temperature difference across the membrane -- and the resulting output of clean water -- decreases as the size of the membrane increases. Rice's "nanophotonics-enabled solar membrane distillation" (NESMD) technology addresses this by using light-absorbing nanoparticles to turn the membrane itself into a solar-driven heating element.

Dongare and colleagues, including study co-lead author Alessandro Alabastri, coat the top layer of their membranes with low-cost, commercially available nanoparticles that are designed to convert more than 80% of sunlight energy into heat. The solar-driven nanoparticle heating reduces production costs, and Rice engineers are working to scale up the technology for applications in remote areas that have no access to electricity.

The concept and particles used in NESMD were first demonstrated in 2012 by LANP director Naomi Halas and research scientist Oara Neumann, who are both co-authors on the new study. In this week's study, Halas, Dongare, Alabastri, Neumann and LANP physicist Peter Nordlander found they could exploit an inherent and previously unrecognized nonlinear relationship between incident light intensity and vapor pressure.

Alabastri, a physicist and Texas Instruments Research Assistant Professor in Rice's Department of Electrical and Computer Engineering, used a simple mathematical example to describe the difference between a linear and nonlinear relationship. "If you take any two numbers that equal 10 -- seven and three, five and five, six and four -- you will always get 10 if you add them together. But if the process is nonlinear, you might square them or even cube them before adding. So if we have nine and one, that would be nine squared, or 81, plus one squared, which equals 82. That is far better than 10, which is the best you can do with a linear relationship."

In the case of NESMD, the nonlinear improvement comes from concentrating sunlight into tiny spots, much like a child might with a magnifying glass on a sunny day. Concentrating the light on a tiny spot on the membrane results in a linear increase in heat, but the heating, in turn, produces a nonlinear increase in vapor pressure. And the increased pressure forces more purified steam through the membrane in less time.

"We showed that it's always better to have more photons in a smaller area than to have a homogeneous distribution of photons across the entire membrane," Alabastri said.

Halas, a chemist and engineer who's spent more than 25 years pioneering the use of light-activated nanomaterials, said, "The efficiencies provided by this nonlinear optical process are important because water scarcity is a daily reality for about half of the world's people, and efficient solar distillation could change that.

"Beyond water purification, this nonlinear optical effect also could improve technologies that use solar heating to drive chemical processes like photocatalysis," Halas said.

For example, LANP is developing a copper-based nanoparticle for converting ammonia into hydrogen fuel at ambient pressure.

Halas is the Stanley C. Moore Professor of Electrical and Computer Engineering, director of Rice's Smalley-Curl Institute and a professor of chemistry, bioengineering, physics and astronomy, and materials science and nanoengineering.

NESMD is in development at the Rice-based Center for Nanotechnology Enabled Water Treatment (NEWT) and won research and development funding from the Department of Energy's Solar Desalination program in 2018.