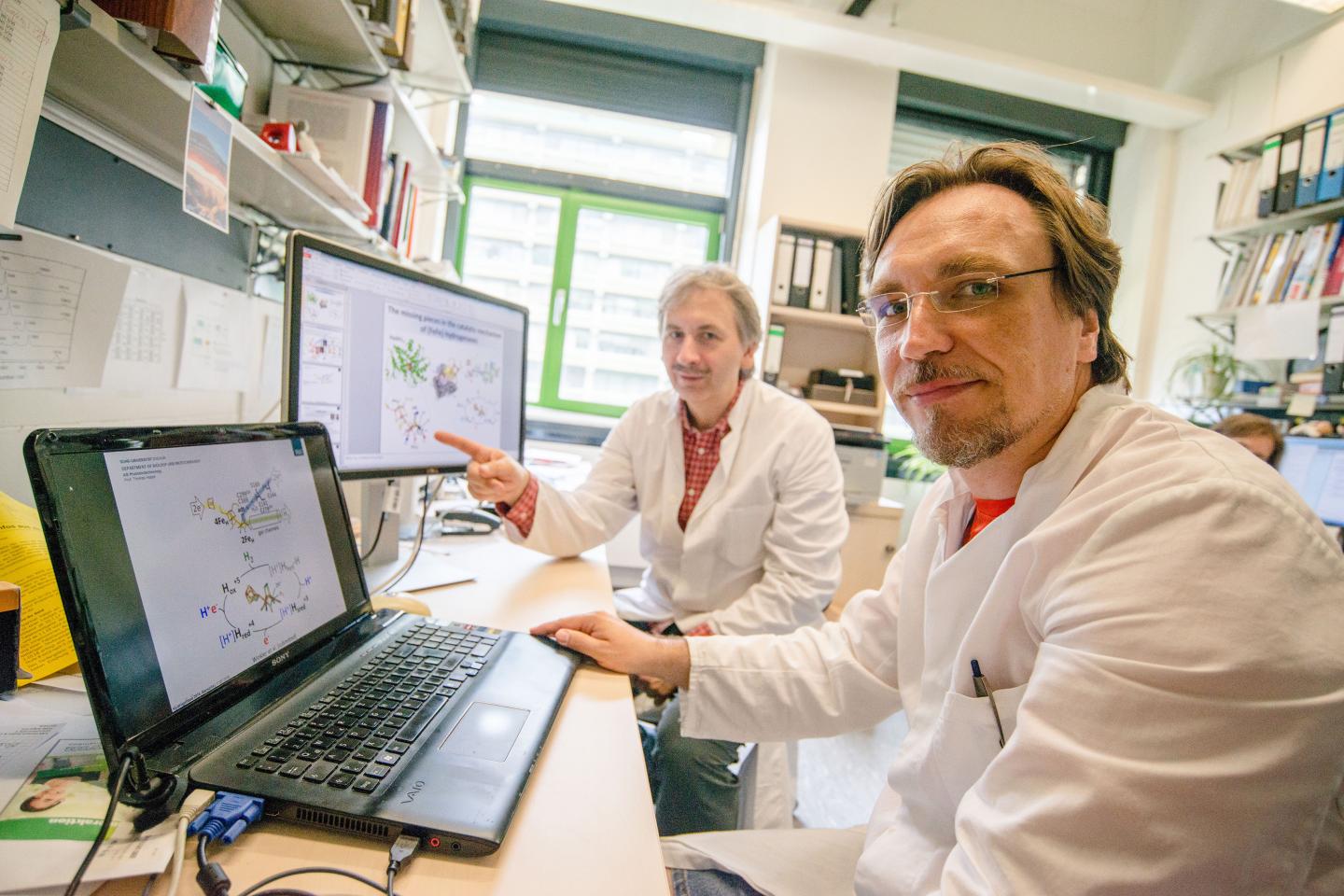 Researchers at Ruhr-Universität Bochum and the Freie Universität Berlin have clarified the crucial catalytic step in the production of hydrogen by enzymes. The enzymes, called [FeFe]-hydrogenases, efficiently turn electrons and protons into hydrogen. They are thus a candidate for the biotechnological production of the potential energy source. 'In order to produce hydrogen on an industrial scale with the aid of enzymes, we must precisely understand how they work,' says Professor Thomas Happe, one of the authors of the study.

The team led by Happe and Dr. Martin Winkler from the Bochum-based Photobiotechnology Working Group reports on the results with Berlin-based colleagues led by Dr. Sven Stripp in the journal Nature Communications.

Hydrogenases can work in two directions: they turn protons and electrons into hydrogen, and also split hydrogen into protons and electrons. These reactions take place at the active centre of the hydrogenase, which is a complex structure comprising six iron and six sulphur atoms, called the H-cluster. During the catalytic process, this cluster passes through numerous intermediate states.

When molecular hydrogen (H2) is split, the hydrogen molecule initially bonds to the H-cluster. "Hydrogenase researchers were always convinced that H2 had to split unevenly in the first step of the reaction," explains Martin Winkler. The idea: A positively charged proton (H+) and a negatively charged hydride ion (H-) are created, which then continue to react quickly to form two protons and two electrons. "The hydride state of the active enzyme, in which the hydride ion is thus bonded to the active centre, is highly unstable - so far no one has been able to verify this," says Winkler. This is precisely what the researchers have now achieved.

Using a trick, they augmented the H-cluster state with the hydride ion, so that it could be verified spectroscopically. When hydrogen is split, a chemical equilibrium is achieved between the reaction partners involved - protons, hydride ions and hydrogen molecules. The concentrations of the three hydrogen states are determined by a dynamic equilibrium of catalytic H-cluster states. When the researchers added large quantities of protons and hydrogen to the mixture from outside, they tipped the balance - in favour of the hydride state. The active centre with the negatively charged hydride ion accumulated in a larger quantity; enough to be measurable.

The team also demonstrated the hydride intermediate state, which also occurs during hydrogen production, in further experiments with hydrogenases that had been altered in a specific manner.

"We were thus able to demonstrate the catalytic principle of these hydrogenases in an experiment for the first time," summarises Thomas Happe. "This provides a crucial basis for reproducing the highly effective catalytic mechanism of the H-cluster for the industrial production of hydrogen." The enzymes can convert up to 10,000 hydrogen molecules per second.