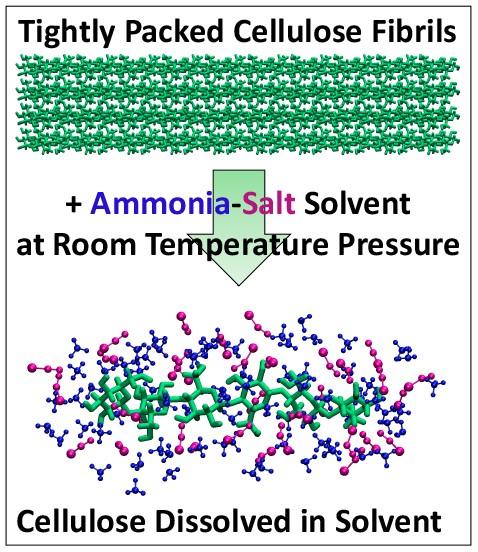 Researchers have developed a new process that could make it much cheaper to produce biofuels such as ethanol from plant waste and reduce reliance on fossil fuels.

Their approach, featuring an ammonia-salt based solvent that rapidly turns plant fibers into sugars needed to make ethanol, works well at close to room temperature, unlike conventional processes, according to a Rutgers-led study in the journal Green Chemistry.

"Our pretreatment system can slash - by up to 50-fold - the use of enzymes to turn solvent-treated cellulose (plant fiber) into glucose (a sugar) used to make bioproducts like ethanol," said lead author Shishir P. S. Chundawat, an assistant professor in the Department of Chemical and Biochemical Engineering in the School of Engineering at Rutgers University-New Brunswick. "Similar processes could greatly reduce the cost of producing biofuels from waste biomass like corn stalks and leaves."

The solvent can also extract more than 80 percent of the lignin in plant waste. Lignin, which binds to and fortifies plant fibers, could be used to help upgrade valuable aromatic chemicals in the future, according to Chundawat. The research benefited from collaborative efforts and access to a high-tech Bio-SANS instrument at Oak Ridge National Laboratory for analysis of how complex biological systems like plant waste respond during processing to better understand how cellulose is dissolved at a molecular level.

Corn stalks, leaves and other residue (called corn stover) and switchgrass, for example, have tightly packed cellulose microfibrils, which are tiny strands thinner than fibers. Microfibrils are difficult to break down using enzymes or microbes, making it hard to turn many plant-based materials in biomass into biofuels or biochemicals. Biomass includes microbial, plant or animal-derived materials used for renewable energy production and industrial processes.

Speeding up the conversion of cellulose into sugars like glucose with enzymes requires suitable solvents or heat- and/or chemical-based pretreatments. In the last 150 years, several solvents that can break down cellulose fibers have been explored. But most solvents remain costly or require extreme ranges of operating pressures or temperatures to be effective.

The ammonia-salt based solvent system quickens the conversion of cellulose into sugars using enzymes. It can greatly reduce the cost of biofuels production because enzymes can account for about 15 percent to 20 percent of the cost of making biofuels like ethanol from biomass.

Next steps will be to optimize the pretreatment process for biomass like corn stover, municipal solid wastes and bioenergy crops like switchgrass and poplar that could be turned into fuels, while also developing more robust enzymes to further reduce costs, according to Chundawat.