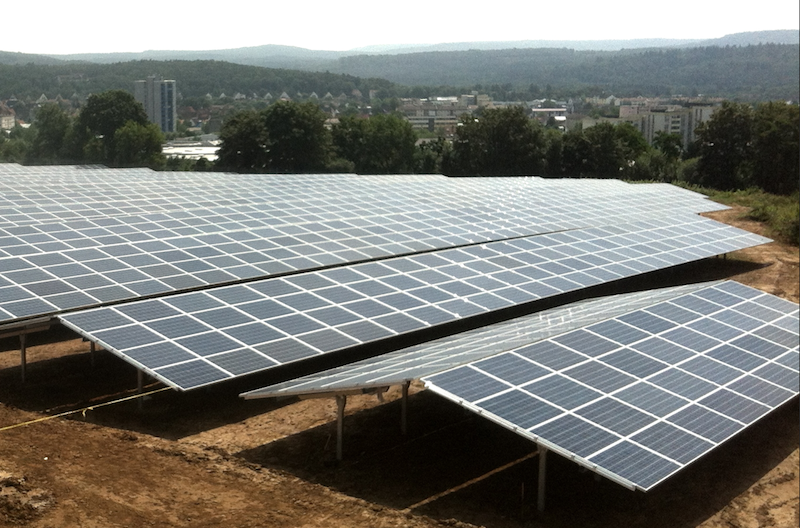 IBC SOLAR, a leader in photovoltaic systems, has finalized three ground-mounted PV power plants for WVE Kaiserslautern, Germany, as general contractor (EPC). As the owner of the plant, WVE, a subsidiary of the utility Kaiserslautern (Stadtwerke Kaiserslautern SWK), now takes over responsibility for the operation and maintenance activities. IBC SOLAR AG was responsible for the technical detailed planning and construction of all three projects. The photovoltaic system integrator has over 30 years' experience under its belt in planning and constructing photovoltaic systems. The credentials presented to WVE made their decision to choose IBC SOLAR as EPC partner an easy one. The largest of the three now completed solar parks with around 6.4 MWp is the Hölzengraben project in the urban area of Kaiserslautern in south-western Germany. The system was designed and built in an east-west orientation. "Even expensive areas or those with limited space, as you often find in urban development, can be used optimally through this type of module arrangement. Unlike with the otherwise common southerly orientation, it allows you to install more modules and thus increase the yield accordingly," explains Ralf Schuberth, Project Manager at IBC SOLAR. For the system integrator from Bad Staffelstein, this is their largest east-west installation yet as well as the largest system build for commercial self-consumption. Parts of the whole plant are being sold by WVE Kaiserslautern to investors, including two resident industrial/commercial companies. They will use a 3 megawatts share of the plant for self-consumption. "Commercial self-consumption is worth it: in Germany, the production costs of solar power are less than 11 cents per kilowatt hour. The usual electricity procurement cost for many tradesmen is considerably higher," explains Kurt Schwan, PV project developer at WVE Kaiserslautern, going on to say "this means that businesses not only reduce their electricity bills but also get planning security through their energy costs. WVE thereby establishes advantages of location in Kaiserslautern, which translate into a significant competitive advantage for the commercial investors." The industrial and commercial companies in the Hölzengraben industrial estate are in the immediate vicinity of the PV power plant and in one of the most important industrial estates in the city. Thanks to the ground-mounted system and the direct link to the solar power plant via its own cable run of up to 1200 meters, they now gain a considerable and exclusive locational advantage. In conjunction with commercial self-consumption solutions, east-west installations have a further advantage: electricity production is shifted into the morning and evening hours and the midday peak is therefore reduced. This means that peaks in power consumption in the morning and evening can be better covered. Coordinating solar power production with the power consumption profile of the companies allows the self-consumption rate for solar power to increase and makes utilization of renewable energy particularly efficient. For the Hölzengraben plant a total of 25,400 modules were installed, which generate almost 6,000 megawatt hours (MWh) of electricity annually. That corresponds to CO2 savings of around 3,700 tons a year. As well as the Hölzengraben project, IBC SOLAR has also completed the Sötern (Nohfelden municipality, Saarland) and Sembach (Kaiserslautern disctrict) PV power plants for WVE. The plants have an output of 1.6 MWp each. After the test run, local investors took over both projects. Once the projects are completed, WVE will be responsible for the technical management of all three PV power plants and the handover to the investors. Following the preliminary planning, coordination of investor concepts and project development, all projects were led by WVE up until they were construction-ready. The creation of approved development planning and PV-ready production of the premises provided the basis for awarding the object to IBC SOLAR, who as EPC-contractor, undertook the detailed planning, turnkey construction and commissioning. IBC SOLAR developed the construction concept for the three PV power plants together with WVE, utility Kaiserslautern, energis and the investors. IBC SOLAR