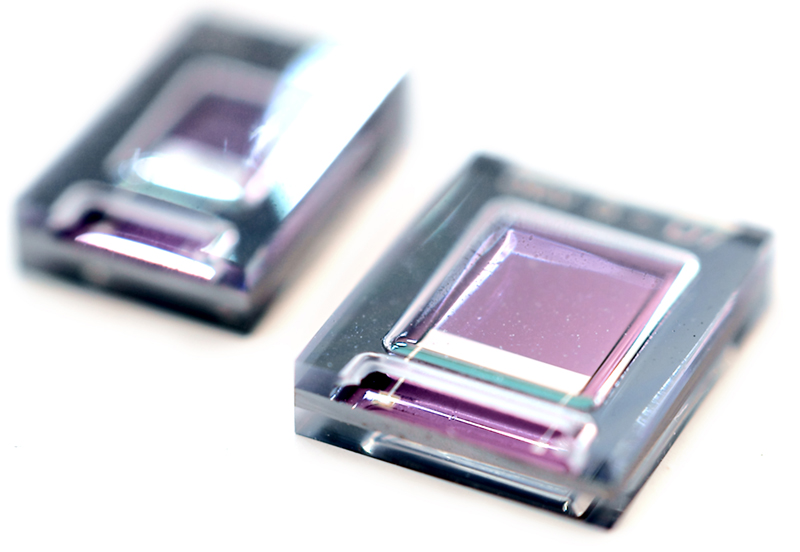 Harvesters with various dimensions. The shiny capacitor stack on top of the beam is visible through the glass package.

Imec and Holst Centre announced that they have made a micromachined harvester for vibration energy with a record output power of 489μW. Measurements and simulation show that the harvester is also suited for shock-induced energy harvesting in car tires, where it could power built-in sensors. In a tire, at 70km/h, the new device can deliver a constant 42μW, which is enough to power a simple wireless sensor node. These results were obtained within the research centre's program for Micropower Generation and Storage. Imec's harvester consists of a cantilever with a piezoelectric layer sandwiched between metallic electrodes, forming a capacitor. At the tip of the cantilever a mass is attached, which translates the macroscopic vibration into a vertical movement - putting strain on the piezoelectric layer and generating a voltage across the capacitor. As piezoelectric material, AlN (aluminum nitride) was chosen. The harvesters are packaged with a 6-inch wafer scale vacuum packaging process. The micromachining production process is compatible with low-cost mass-production fabrication. According to imec, the harvester has a record output power of 489μW when the vibrations closely match the MEMS' resonance vibration, which in this case is 1011Hz. Together with an automotive partner, imec also validated the use of the harvester for use in car tires. These submit the harvester to regular shocks, depending on the car's speed and the characteristics and condition of the tire. Each shock will displace the mass, after which it will start to ring down at its natural resonance frequency. During this ring-down period, which depends on the quality factor Q of the harvester, part of the mechanical energy is harvested. It is shown that in this way, a constant power output as high as 42μW can be harvested at a speed of 70km/h. Micromachined vibration harvesters such as these are well suitable devices to generate electricity from machines, engines and other industrial appliances which vibrate or undergo repetitive shocks. In these environments, they will power miniaturized autonomous sensor nodes, in situations where battery replacement is not sustainable or practical. Harvesters will allow sustainable monitoring on a massive scale. One example is Tire Pressure Monitoring Systems (TPMS) and its successors: a car tire with built-in sensors that monitor e.g. the tire integrity and pressure, the road condition, or the driving style. www.imec.be