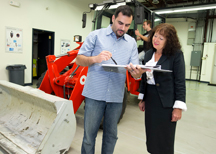 Researchers at Purdue University have shown how to reduce fuel consumption while improving the efficiency of hydraulic steering systems in heavy construction equipment. The new approach incorporates several innovations: It eliminates valves now needed to direct the flow of hydraulic fluid in steering systems and uses advanced algorithms and models to precisely control hydraulic pumps. New designs might also incorporate textured "microstructured" surfaces inside pumps to improve performance. "Fuel consumption of heavy off-road equipment accounts for a significant portion of total global fuel usage, so improving efficiency is very important," said Monika Ivantysynova, Maha Fluid Power Systems Professor in Purdue's School of Mechanical Engineering. "It's also important from a commercial business point of view because money saved on fuel improves a company's bottom line." Typical hydraulic systems in heavy equipment use a central "variable displacement pump" that delivers fluid, and valves that throttle the flow of fluid to linear and rotary "actuators" that move tools such as shovels, buckets and steering mechanisms. This throttling causes energy to be dissipated as heat and wasted. In the new valveless design, each actuator has its own pump, eliminating the need for valves. The actuator motion can be precisely controlled by adjusting the pump displacement, which changes the amount of fluid being delivered to the actuator. Being able to adjust the pump displacement makes it possible to run the machinery's diesel engine at optimal speeds, resulting in additional fuel savings. Findings are detailed in a research paper being presented during the SAE 2013 Commercial Vehicle Engineering Congress on Oct. 1-3 in Rosemont, Ill. The paper was authored by doctoral student Naseem Daher and Ivantysynova, director of Purdue's Maha Fluid Power Research Center. Present hydrostatic steering systems are plagued by poor energy efficiency, and industry is developing new "steer-by-wire technologies" to reduce fuel consumption and improve performance. However, the steer-by-wire systems being developed still require energy-wasting valves. Testing the new "electro-hydraulic power steering system" on a front loader has shown a 15 percent fuel savings and 23 percent increased machine productivity, for a total fuel efficiency increase of 43 percent during steering maneuvers. "The world's first pump-controlled steer-by-wire prototype machine is now readily available for further research and development," said Ivantysynova, who has a dual appointment in the Department of Agricultural and Biological Engineering. In previous projects, Maha researchers have shown that valveless systems could reduce fuel consumption by 40 percent in an excavator equipped with the technology. Measurements on the same excavator prototype also showed 70 percent productivity improvement in terms of tons of soil removed per kilogram of fuel consumed. The new steering system also may help reduce operator fatigue while improving safety by controlling the level of "steering-wheel torque feedback." Steer-by-wire technology removes all torque - the twisting force required to turn the steering wheel. However, removing the torque is potentially dangerous because the driver lacks the tactile feedback needed to properly control the vehicle. In the new system, torque feedback is regulated according to parameters such as steering wheel angle and turning speed, vehicle speed and the angle of a rotating joint that connects the vehicle's two subframes. New thermodynamic modeling by the group also has found that steel parts in the pump undergo significant deformations from high heat during operation. "The deformation due to heat can be as large as the thickness of the lubricating film, and this is very important," she said. "We have developed the only code that models these lubricating interfaces under extreme heat and high pressure." The research paper includes details of the system's layout, the hardware and electronic controller developed through the use of modeling. The researchers developed and used the modeling to simulate the system's performance. The Purdue laboratory is working with industry partners on applied research projects, said Anthony Franklin, the Maha lab's manager. "Our prototypes are very close to commercial prototypes, so they are readily adaptable to machines now in use and can be easily industrialized when manufacturers decide to make the transition into valveless systems," he said. About 25 students are involved in research in the center. The Maha Fluid Power Research Center is part of the Engineering Research Center for Compact and Efficient Fluid Power, funded by the National Science Foundation, participating companies and universities. Purdue