The findings could help save carbon dioxide in the future 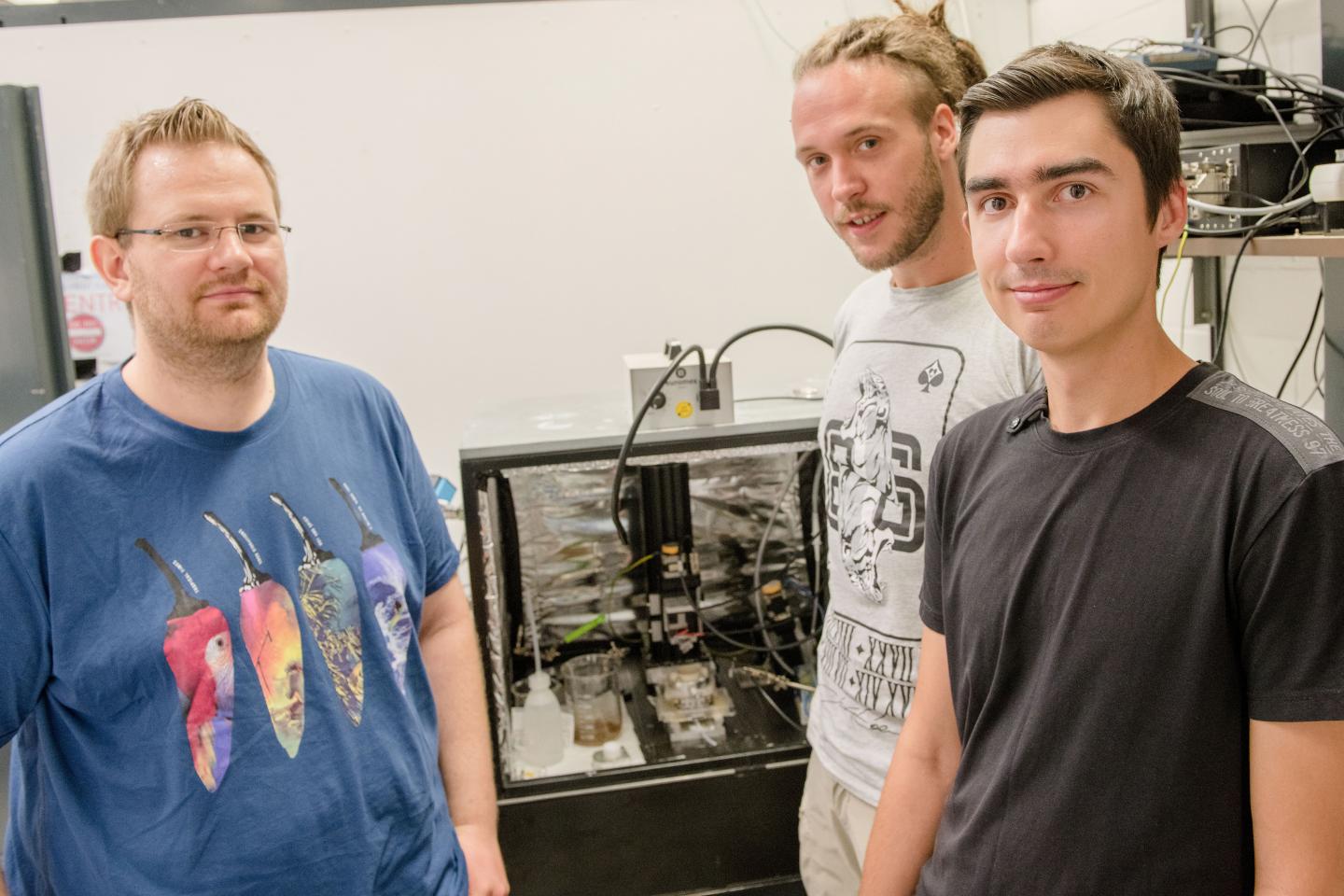 Part of the Bochum research team: Alexander Botz, Denis Öhl and Tsvetan Tarnev (from the left)

In the industrial production of chlorine, recently special electrodes have been introduced, which consume much less current than conventional systems. The method requires oxygen which is introduced into hot, highly concentrated sodium hydroxide solution, in which it is poorly soluble. It is still unclear how industrial current densities can be achieved under these conditions. In collaboration with engineers from the Technical University of Clausthal, researchers from the Center for Electrochemical Sciences (CES) of the Ruhr-Universität Bochum have gained new insight into the processes involving these types of electrodes, also referred to as oxygen-depolarised cathodes. The team including Alexander Botz, Denis Öhl and Prof Dr Wolfgang Schuhmann report on their results in the journal Angewandte Chemie, published online on 3 August 2018.

Chlorine is an important raw material for the chemical industry. It is produced through electrolysis of table salt and water, with sodium hydroxide and hydrogen being produced as by-products in the conventional process. While the oxygen-consuming cathodes require oxygen as the starting material, the by-product hydrogen is eliminated - with an approximately 30 per cent saving in electricity. The reaction occurs at 80 degrees Celsius in highly concentrated sodium hydroxide. Oxygen is very poorly soluble under these conditions. "These types of electrodes have been used industrially for years, but we do not understand why they actually work," explains Wolfgang Schuhmann, Head of the Department of Analytical Chemistry and CES.

With their experiments, the researchers showed that reaction conditions change constantly during chlorine production. Three phases meet near the oxygen-consuming cathode, which consists of silver: solid silver particles are bathed in highly concentrated liquid sodium hydroxide, while gaseous oxygen is forced into the system from the back. Thus far, researchers have mainly studied the concentration of the reacting oxygen in the solid-phase environment, developing models that attribute the high current density to this parameter.

Not only oxygen determines current density

For the current study, the Bochum scientists developed a method with which they could also analyse the processes in the liquid phase. They positioned a thin microelectrode - a mere hundredth in thickness of a human hair - directly on the surface of the working oxygen-consuming cathode. With this, they tracked the changes of the water and the hydroxide ions (OH-) concentrations, which arise in the reaction. The result: the concentration of water and hydroxide ions on the electrode surface shows intense fluctuation through the course of the reaction and is not uniform throughout.

"We have suspected for years that there must be significant local concentration fluctuations inside the electrode which could contribute to the high current densities," explains Schuhmann.

"These drastic changes have not yet been considered in the models reflecting the reaction," says Alexander Botz. "The results are tremendously important for the future optimisation of such electrodes."

As part of a research group funded by the German Research Foundation, together with cooperation partners the Bochum team hopes to gain even more insight into the details of the reaction mechanism. "These investigations are essential for the development of gas diffusion electrodes, which will be of great importance in the future for the binding of CO2 from the air and thus contribute to a reduction in the emission of greenhouse gases," explains Schuhmann.