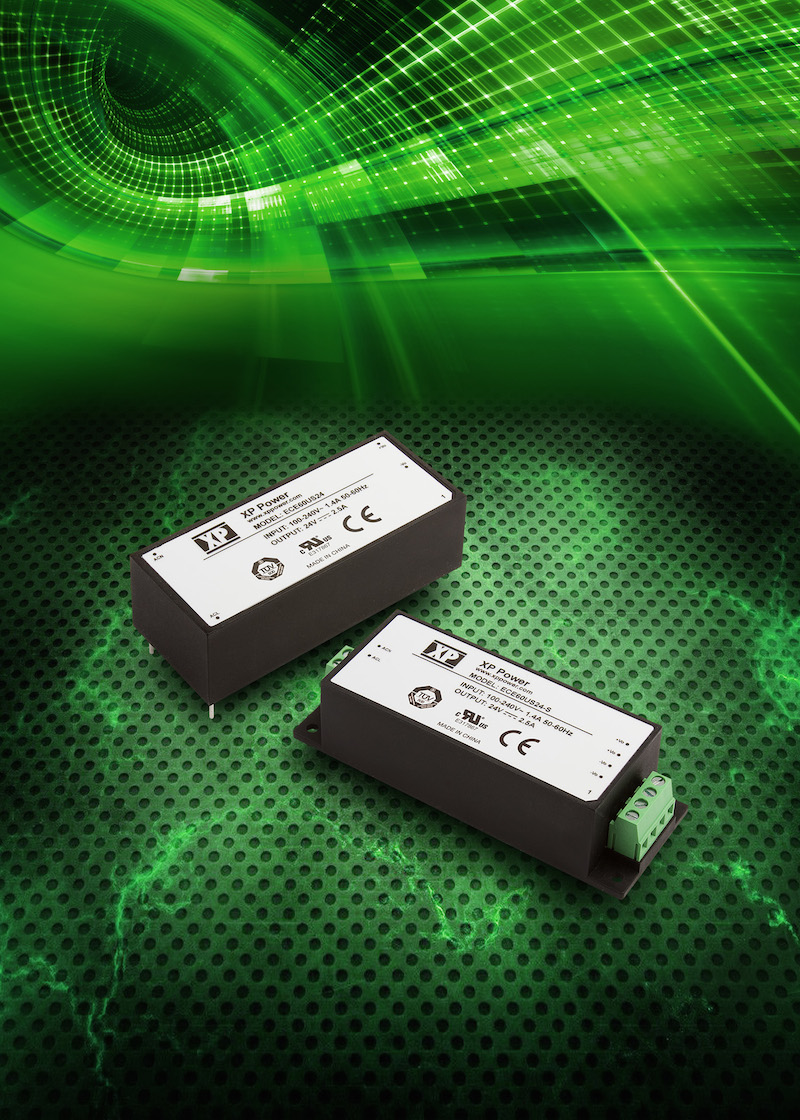 XP Power announced the ECE60 series of single output encapsulated 60 Watt AC-DC power supplies. Suiting applications that require a slim profile, a high power density and low no-load power consumption, the ECE60 is available in either PCB mount, chassis mounted with screw terminals, or in a DIN rail mount configuration. Believed to have the smallest footprint and the highest power density of any 60 Watt power supply in the industry, the PCB mounted model measures 91.4 x 38.1 x 28.0 mm (3.6 x 1.5 x 1.1 inches) and has a power density of >10 Watts per cubic inch.

The range comprises eight models providing all the popular nominal output voltages from + 3.3 to + 48 VDC. A peak load capability allows up to 130% of rated output power to be available for up to 30 seconds in order to accommodate a higher start up current when powering a motor for example. Using this approach allows an engineer to avoid having to specify a more expensive higher rated power supply just to provide for an occasional peak load requirement. Also, with its no load power consumption of less than < 0.3 Watt and an high efficiency up to 89% the ECE60 series also ensures that end products meet the criteria of “green” energy saving initiatives.

The ECE60 meets EMC specification EN55022 for class B conducted and radiated emissions without the need for any additional filtering components. The supply is able to operate in most environments over a wide range of temperature from – 25 to + 70 degrees C with no derating until + 50 degrees C. With a Class II construction no Earth or Ground connection is required. The ECE60 60 Watt power supply is the latest addition to the ECE series that already comprises 5, 10, 20 and 40 Watt models.