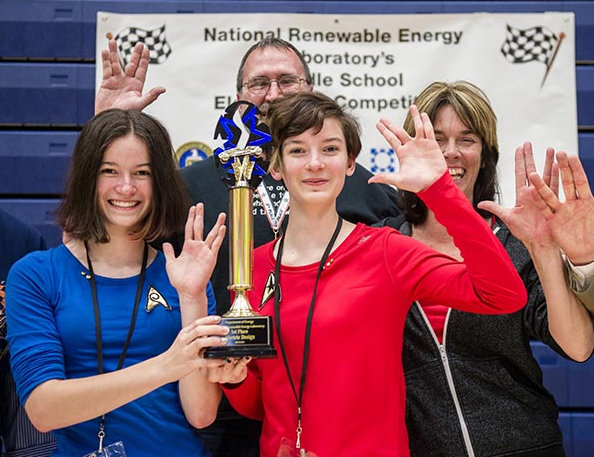 Kira and Teegan Cordova won the award for best-designed car in the battery division.

Teegan and Kira Cordova love the original Star Trek TV series. That much is obvious. The eighth-grade twins from Ken Caryl Middle School in Littleton are wearing the uniform tunics from the 1960s show—Teegan's in red and Kira's in blue. The model electric car they're racing in the 25th Annual Junior Solar Sprint and Lithium Ion Battery car competitions carries the designation NCC-1701, the same identifier emblazoned across the hull of the USS Enterprise—which fits perfectly with their car's name: "Starship Enterprise."

Less obvious is the amount of work it took to get them and their car to Jefferson County's Dakota Ridge High School, where the races took place. The twins worked for weeks after school to perfect the design of their lithium-ion battery-powered car, scrapping a handful of ideas, and taking lessons learned from racing a solar-powered car at last year's event.

A year ago, their car performed "badly," Teegan said. "We learned a couple of things, chiefly to make sure the wheels are level and straight because last year our car went diagonally."

The annual race is sponsored by the Energy Department, its National Renewable Energy Laboratory (NREL), the Alliance for Sustainable Energy, Jeffco Public Schools, and Dakota Ridge High School. NREL sponsors the annual event as a way to encourage students to take an interest in science, technology, engineering, and math (STEM) fields.

Sixty-three teams from 17 middle schools across Colorado took turns lining up in front of 10 black neoprene tracks set up in the Dakota Ridge gymnasium. Cloudy skies wreak havoc on the solar-powered cars, so the race was moved indoors. By the second of the three time trials, as the rumble of thunder competed against the noisy excitement of almost 200 students, it became clear the decision was sound.

The cars are guided along the track by fishing line, but that's no guarantee of success. Some cars practically flew the length of the course. Others sputtered and stalled along the way. And other cars shot off the course and bumped into competing cars. Between races, students could retreat to the "impound lot," where they were able to don safety glasses and make any necessary adjustments or fixes to their cars.

"One of our biggest problems last year in racing a solar car," Kira said, "was whenever we wanted to test it, it wasn't sunny outside. The battery car could be tested practically anywhere. You just flip a switch."

NREL supplies the kits to make the cars in the battery division. Schools must purchase what's needed to make a solar-powered vehicle. Coming up with the design is up to the students.

Warren Astler, who teaches science and coordinates the STEM program at Arma Dei Academy in Littleton, said his students start by drawing a design on paper, then building it, testing it, and making improvements. "They found that what they put on paper didn't always work," he said.

One of his teams, Astler said, wanted to use a hinge so that the solar panel could be adjusted to more directly receive the sun. But the hinge added too much weight.

"We have to make these cars fast," said Yair Ruelas, a seventh-grader at Whittier K-8 School in Denver, who dubbed his team in the battery division "Joe." "If they're heavy, they don't move."

"It's really a game of: can you get the best design, and can you get the fastest car?" said Jack Cooper, a sixth-grader at Stargate School in Thornton. "It's difficult to have both." Liam Craig, a seventh-grader and Cooper's partner on the "SG Solar 2" team, added: "The coolest-looking car isn't necessarily the fastest."

The car Cooper and Craig raced relied on a simple design, closely following the instructions in the kit and with the solar panel angled to catch the sun. "It probably doesn't need much modifying," Cooper said. "It's already aerodynamic."

Their design worked, and the "SG Solar 2" team won its division with a time of 6.35 seconds.

Model cars, whether powered by the sun or by batteries, don't make much noise. Hundreds of middle-school students cheering do. It's impossible to overlook their excitement, especially as the number of teams still in the competition narrows.

"This event is doing what it's supposed to do—get students excited about science and engineering," NREL Associate Lab Director Bill Farris said.

What One Teacher Hopes Students Learn

Kathryn Jones and Grace Ryan, both seventh-graders at Ken Caryl, competed in the solar division as "Ophiotaurus," a name that describes a creature from Greek mythology that was part bull and part serpent. Their car was more birdlike, though, with a beak-like front and brightly painted blue, yellow, purple and green.

"The only thing we were sure of is it would be colorful," Kathryn said.

The "Ophiotaurus" car was quick off the start in its first qualifying heat, tearing down the straightaway in an enviable 6.16 seconds. Ultimately, though, Kathryn and Grace's creation finished in fourth place for the day, its time of 7.76 seconds a mere sixth of a second from taking third.

Christine Hruby, who teaches science to seventh- and eighth-grade students in Ken Caryl's gifted and talented program, coached four teams of racers. She ticked off a list of what she hopes her students get out of participating: "Problem solving. Critical thinking. Learning how to work as a team. Staying cool and calm under pressure. And also the math of the 4:1 ratio of the gears."

"Starship Enterprise" made it to the finals, but finished in sixth place with a time of 8.28 seconds. The winning entry in the battery division was the "BMS 2 Battery" team from Bell Middle School in Golden, with a time of 7.19 seconds.

"Starship Enterprise" won for the best-designed car in the battery division. Denver's Logan School team "The E.-J.A.M." won for the design of its solar-powered car, which featured massive wheels alongside a solar panel that sat parallel to the ground.