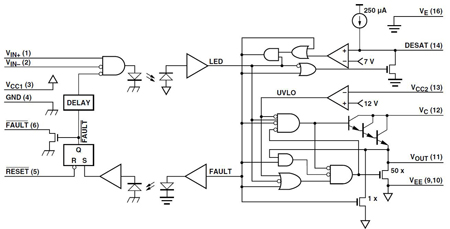 Its more than 10 years since the market introduction of Avago technologies first smart gate driver. At that time it was the world's first integrated IGBT gate driver optocoupler with inbuilt fault detection and feedback functionality. The use of DESAT fault protection techniques was well known even then, but the complex circuit nature and high associated cost, marginalized its use to a very small market segment. The introduction of this integrated gate driver was a major milestone, in that it enabled adoption of high performance IGBT protection on a mass scale, in medium and low power inverter industrial applications. Inverter drive technology has now moved into the automotive realm, with applications ranging from low power applications such as air conditioning and heating, through to high power applications such as traction in Hybrid and full electric vehicles.

Although many new types of power switches are being evaluated for use in automotive inverters such as silicon carbide, the current preferred power switch in high voltage inverter applications is the IGBT. In the desire to minimize power losses in IGBT's, subsequently generations of IGBTs have sought to reduce both switching and conduction losses. In regards to conduction losses, often a compromise is made with robustness. A reduction in conduction loss often leads to an increase in short circuit current and consequently a reduction in short circuit survival time. So to achieve the requirement of low conduction loss and maintain overall system robustness, it is important to have a fast and reliable IGBT short circuit detection and protection circuit.

Many types of internal or external fault conditions in an inverter can result in current overload conditions in one or more IGBTs; examples are phase to phase short circuit's or shoot conditions on inverter bridge legs. Some of these faults can be detected using phase current sensors, but not all faults may be detected in this manner. The alternative to using the phase current measurement method is to detect the current level at each IGBT. There are several methods of detecting the current level e.g. shunt resistor or split emitter IGBT. Each of these methods generates a voltage signal which is proportional to the load current on the IGBT. The over current protection method in turn uses this voltage threshold to trigger protection mechanisms. Since the maximum tolerable current for the IGBT is dependent on IGBT process variations, operating temperature and gate voltage it is necessary to set the trigger threshold at quite a conservative level. DESAT detection as it names suggests relies on directly detecting the IGBT coming out of saturation due to an over current condition. The advantage of this method is that it monitors the actual operating condition of the IGBT and effectively reduces the influence of many external factors, enabling higher power utilization of the IGBT.

The ACPL-36JV incorporates all the necessary features to provide an automotive grade integrated isolated IGBT driver with DESAT fault detection. High speed bi-directional communication is achieved by two high speed optical links between two integrated circuits, buffer IC1 and output IC2. The buffer IC which is gnd referenced to the low voltage controller is used to transmit the isolated gate drive trigger signal and acts as a receiver for the fault status signal. The output IC is based on a BiCMOS/power DMOS process providing a high performance gate drive circuit drive together with fault detection circuitry.

Just as important as the detection of the fault is the fault resolution. By the time the fault condition is detected, it is possible that quite a considerable current is flowing. So if the IGBT is shut of very quickly, the fast di/dt together with unavoidable parasitic connection inductance can potentially cause the peak voltage rating to be exceeded, defeating the protection philosophy. This problem is mitigated by implementing soft shut turn off, which reduces the di/dt by increasing the IGBT gate discharge time in the event of a fault condition. The autonomous fault detection function can be configured to simultaneously shut down all other gate drivers at the same time. Alternatively the fault detection may be configured to isolate fault detection and signaling to each IGBT separately. The later method readily allows the implementation of a graceful fault and shutdown strategy which is often desirable in automotive traction applications.

Automotive quality and reliability expectations are typical much higher than many consumer application and industrial applications. This increased level of reliability often has to been obtained in a more hostile environment. One of the key elements of the optically isolated gate driver is the internal LED. The last decade has seen rapid advances in the performance of LED technologies, enabling their use in an ever expanding range of illumination applications. These same technological advancements have also enabled significant improvements in LED's for optocouplers. The purpose designed LED used in all of Avago's automotive optocoupler products offers not only excellent stability over a wide temperature range, but also an extremely stable operation even after long periods of time at high ambient temperatures. 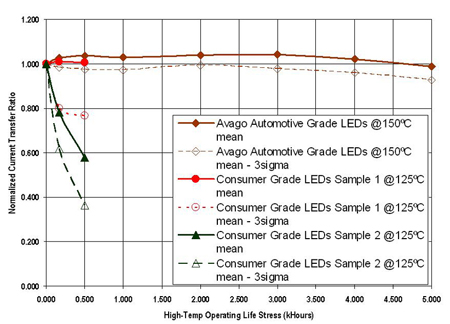 The gate drive and fault detection functionality must operate flawlessly even in the presence of high levels of radiated and conducted electromagnetic noise. Such noise emissions have a high propensity to cause disruption to low voltage digital signals. Occasional false triggering of the fault detection signal might be regarded more as an annoyance, but false triggering of the IGBT gate driver could result in uncontrolled shoot through in inverter legs, leading to either immediate or latent IGBT damage. In the case of immunity to radiated emissions the advantage of optical transmission technologies is perhaps obvious, but less obvious is the advantage in regard to common mode voltage immunity. Optical isolation allows the internal separation distance to be large; ensuring a very low parasitic capacitor across the insulation boundary. Secondly the beauty of optical transmission technology is that the data transmission modulation frequency (light) is many orders of magnitude higher than external noise frequencies, enabling the use of a highly efficient optical transparent faraday shield on the receiver. One of the fundamental requirements of the isolated gate driver is to provide high voltage level shifting functionality. The peak voltage stress applied across the optocoupler is directly related to the DC link voltage. Many traction applications today are using 400V link voltages but in the near future this will increase to 900V. Very early adopters of inverter drives often observed, that compared to 50Hz AC the increased HV stress of a high frequency inverter was often found to cause premature insulation failures in the winding insulation of order generation AC induction motors. This same extreme HV stress condition is also observed across the isolation of the gate driver. To prevent the activation of wear out mechanisms such as partial discharge, space charge degradation and other time dependent aging mechanisms, thick double insulation polymer construction is used. Ensuring that maximum E-field stress levels are always maintained at long term sustainable levels. An additional benefit of such a construction is the ability to meet reinforced or double insulation requirements for safe insulation applications. In addition to designed in reliability. Consideration needs to be given to quality control procedures such as TS 16949 and qualification testing according toAEC-Q100. This includes qualification and testing at multitude of levels, ranging from design rules and foundry level through to packaging. www.avagotech.com/optocouplers