Author:
UNIVERSITY OF TEXAS AT AUSTIN 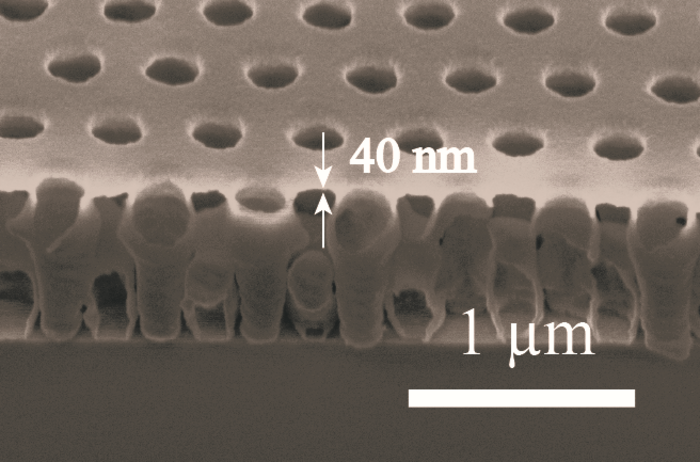 Unique defects in a 3D material.

­Researchers from The University of Texas at Austin and North Carolina State University have discovered for the first time a unique property in complex nanostructures that has thus far only been found in simple nanostructures. Additionally, they have unraveled the internal mechanics of the materials that makes this property possible.

In a new paper published this week in the Proceedings of the National Academy of Sciences, the researchers found these properties in oxide-based "nanolattices," which are tiny, hollow materials, akin to things like sea sponges in structure.

"This has been seen before in simple nanostructures, like a nanowire, which is about 1,000 times thinner than a hair," said Yong Zhu, a professor in the Department of Mechanical and Aerospace Engineering at NC State, and one of the lead authors on the paper. "But this is the first time we've seen it in a 3D nanostructure."

The Research: The phenomenon in question is called anelasticity. It relates to how materials react to stresses over time. When the materials studied in this paper were bent, tiny defects moved slowly in response to the stress gradient. When the stress is released, the tiny defects slowly return to their initial positions, resulting in the anelastic behavior.

The researchers also discovered that when these defects move back and forth, they unlock energy dissipation characteristics. This means they can dissipate things like pressure wave and vibration.

Why it Matters: The material could someday serve as a shock absorber, but because it's so lightweight and thin, it would be on a very small scale. The researchers say it could make sense as part of chips for electronics or other integrated electronic devices.

"You could potentially put this material under the semiconductor chips and protect them from outside impact or vibration," said Chih-Hao Chang, an associate professor in the Walker Department of Mechanical Engineering at UT Austin.

What's Next: Now that these anelastic characteristics have been discovered, the next step is to control them. The researchers will examine the geometry of the nanostructures and experiment with different loading conditions to see how to optimize the anelastic performance for energy dissipation applications.

The Team: From UT Austin, Chang and I-Te Chen, a former PhD student; and from NC State, Zhu, Felipe Robles Poblete and Abhijeet Bagal, both former PhD students. The research was supported by grants from the National Science Foundation.