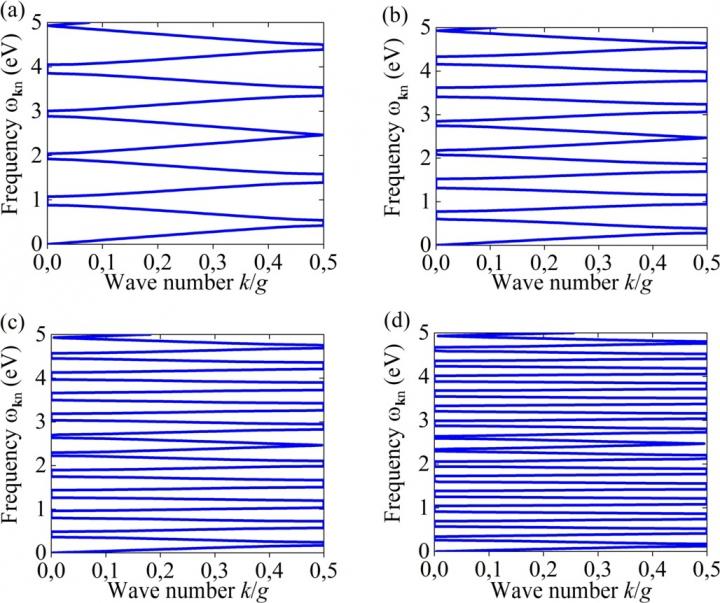 Ionization energy is one of the most important physicochemical parameters. It is defined in terms of the amount of energy required to rip an electron from an atom. The dependence of the ionization energy on the atomic number determines the periodic law of chemical elements, which is assumed to be fundamentally constant. Based on the previously predicted effect of changing the electron mass, the research team showed that the ionization energy of atoms placed in photonic crystals with an ultrahigh refractive index can be significantly changed.

Photonic crystals are media with periodically changing electromagnetic properties. An example of a photonic crystal is a dense packing of dielectric microspheres, between which there is an empty space. The size of these voids is large enough to consider an electron or an atom placed there free from interaction with the material of the walls. Nevertheless, the environment of photonic crystals indirectly affects the properties of particles by modifying their own radiation field.

The fact is that according to the modern picture of the world, all particles participate in vacuum quantum fluctuations. In particular, an electron constantly creates and immediately destroys virtual photons. It turned out that photonic crystals are capable of influencing this interaction. Traditionally, this question has been studied only for electrons bound in an atom. An atom participating in such a process acquires a correction to its energy which is called the Lamb shift and is very small relative to the atomic energies themselves, even if the atom is placed in photonic crystals.

The reason why no one has considered the quantum fluctuations of a free electron in a photonic crystal is its mass in this state equals infinity. The fact is that due to the interaction with vacuum, the mass of a free electron must acquire a correction, which is called the electromagnetic mass. This correction is added to the "bare" mass of the electron and forms its factually observed mass.

However, calculations performed in the first half of the 20th century showed that the integrals in the formulas for the electromagnetic mass diverge. To get around this problem, physicists came up with a mass renormalization procedure, which consisted of ignoring the electromagnetic mass and replacing in all other formulas the "bare" mass of the particle by the observed mass. This paved the way to quantum electrodynamics, whose predictions under ordinary conditions are confirmed in experiments with high accuracy.

However, if photonic crystals affect the interaction with a vacuum, this should be reflected in the electromagnetic mass, and, as a consequence, in the actually observed electron mass. The researchers showed that in this case a final correction arises, which is equal to the difference between the electromagnetic masses of an electron in a photonic crystal and in a vacuum. Moreover, due to the anisotropy of the photonic crystal, the mass depends on the direction in which the electron is flying. This leads to the fact that an electron bound in an atom has new energy corrections, which depend on its state. It turned out that for very high refractive indices of the substance from which the photonic crystal is made, these corrections become comparable to the energies of transitions between levels, including the energies of ionization transitions.

In this work, they calculated corrections to the ionization energy of hydrogen and alkali atoms placed in the voids of a one-dimensional photonic crystal made of materials with an ultra-high refractive index. It turned out that the decrease in the ionization energy can reach 68 percent in the case of the cesium atom.

The predicted effect is of great importance for both fundamental and applied physics and chemistry. In particular, a method for manipulating the electromagnetic mass has been proposed for the first time. In addition, the effect will allow influencing the periodic law of chemical elements, and the very change in the ionization energy can be used to synthesize new chemical compounds and create drugs based on them.

In the future, the team plans to cooperate with large pharmaceutical centers and study the possibility of its use for the synthesis of new compounds. An experimental verification of the effect can be done by measuring the rate of a chemical reaction occurring in the gas phase between the walls of a one-dimensional photonic crystal. In addition, they want to calculate the correction to the ionization energy for other chemical elements.