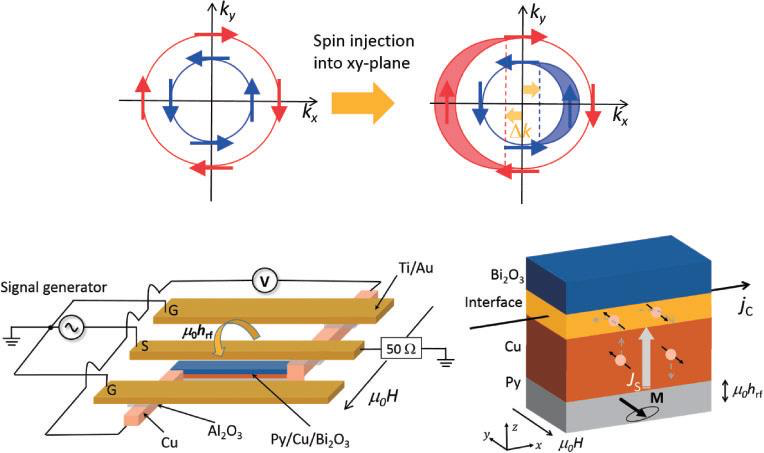 Top: Fermi contours with Rashba splitting, and non-equilibrium spin accumulation resulting from a shift of Fermi contours by spin injection. Bottom left: Experimental setup for the spin pumping measurement. Bottom right: Schematic of spin-to-charge current conversion at the Cu/Bi2O3 interface. Spin currents are generated by spin pumping from a Py layer in ferromagnetic resonance to a Cu layer and reach a Cu/Bi2O3 interface. Then, the spin-to-charge current conversion occurs owing to the spin-momentum locking at the Rashba interface.

Devices based on spin currents rather than charge currents, offer interesting technological opportunities, such as future high-density, ultrafast and low-power magnetic memory devices. Conversion between charge and spin currents is key for exploiting such “spintronics”. Researchers at the University of Tokyo and RIKEN in Japan have now demonstrated spin-to-charge current conversion by spin pumping from a ferromagnetic permalloy (Py: Ni80Fe20) to a Cu/Bi2O3 interface. Importantly Cu/Bi2­O3 is a metal/insulator interface, making it easier to control the spin-charge current conversion with an external electric field in the future.

One way of converting between charge and spin currents is by exploiting the interactions between electron’s spin and its motion, described as spin-orbit coupling (SOC). Heavy metals typically have large SOC but while spin-charge current conversion has been observed at Bi/Ag interfaces, applying an electric field at a metallic interface poses difficulties, hindering the possibility of controlling the conversion electrically.

Karube, Kondou and Otani fabricated trilayer 5 μm by 200 μm strips of 5 nm thick Ni80Fe20 (Py), 10 nm thick Cu, and 100 nm thick Bi2O3, and induced a ferromagnetic resonance in the Py using a Ti/Au waveguide alongside the multilayer. The voltage across the strip was then measured by sweeping the in-plane magnetic field applied perpendicular to the strip during application of 9 GHz rf current in the waveguide.

A clear peak corresponding to the spin-to-charge current conversion was observed in the voltage spectrum of the Py/Cu/Bi2O3 trilayer strip, but was absent when either Cu or Bi2O3 were omitted, highlighting the role of the Cu/Bi2O3 interface. The researchers conclude in their report, “We expect that this non-magnetic metal/Bi2O3 type interface will pave a way for controlling the conversion between spin and charge current by an electric field effect, which could be beneficial for domain wall motion and the magnetization switching.”