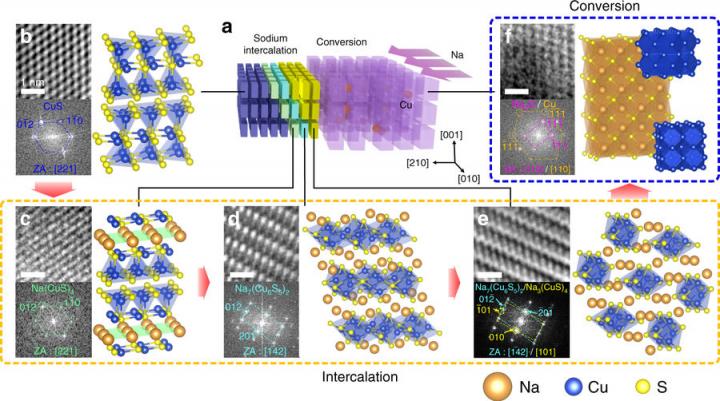 This is the sodiation process of copper sulfide.

Professor Jong Min Yuk and Emeritus Professor Jeong Yong Lee from Department of Materials Science and Engineering succeeded in developing a new anode material suitable for use in a SIB. Compared to the existing anode materials, the copper sulfide anode was measured to exhibit 1.5 times better cyclability with projected 40% reduction in cost.

Batteries used in various applications including mobile phones are lithium ion batteries, mostly referred as Li-ion batteries or LIBs. Though they are popularly used until now, large-scale energy storage systems require much inexpensive and abundant materials. Hence, a SIB has attracted enormous attention for their advantage over a lithium counterpart.

However, one main obstacle to commercialization of SIB is the lack of suitable anodes that exhibit high capacity and the cycling stability of the battery. Hence, the research team recognized this need for a good anode material that could offer high electrical conductivity and theoretical capacity. The material was found to be copper sulfide, preferably in nanoplates, which "prefers to make an alloy with sodium and is thus promising for high capacity and long-term cyclability." sis presented in the study reveals that copper sulfide undergoes crystallographic tuning to make a room for sodium insertion. Results indicate that the sodium ion-insertion capacity of copper sulfide is as much as 1.5 times that of lithium ions for graphite. Furthermore, a battery with this new anode material retains 90% of its original capacity for 250 charge-discharge cycles.

With the natural abundance of sodium in seawater, this development may contribute to reduction in battery costs, which can be translated into up to 30% cut in the price of various consumer electronics.

Professor Yuk said, "These days, people are showing a great deal of interest in products related to renewable energy due to recent micro-dust issues ongoing in Korea. This study may help Korea get a head-start on renewable energy products".