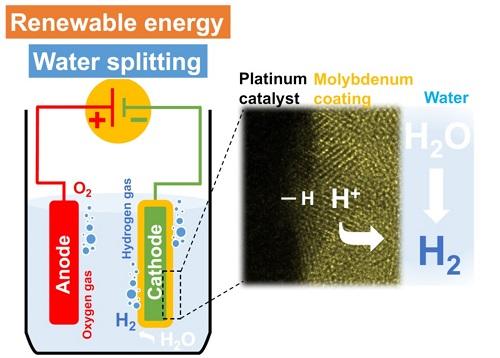 A high-resolution electron microscope image (right) of the platinum electrocatalytic layer coated with molybdenum. The platinum catalyzes the hydrogen-evolution reaction (left) in acidic medium from protons in the electrolyte while the molybdenum layer inhibits water-forming reactions.

A novel molybdenum-coated catalyst that can efficiently split water in acidic electrolytes has been developed by researchers at KAUST and could help with efficient production of hydrogen.

When burned, hydrogen is converted into water and heat to make an entirely clean power source. Thus, in the quest for greener power, there is an urgent need for a sustainable and efficient means of producing it. One way is to split water using a process known as photocatalytic hydrogen evolution: water molecules are split into hydrogen and oxygen using only sunlight to provide the necessary energy. In this sense, hydrogen acts as a means of storing solar energy.

Scientists are searching for ways of improving this water-splitting reaction by developing an optimal catalyst. While many different materials have been tried, they are usually adversely affected by the oxygen that is also created alongside the hydrogen during the process. The two gaseous products can easily recombine back to water due to reverse water-forming reactions, hindering the production of hydrogen.

Angel Garcia-Esparza and Tatsuya Shinagawa--two former KAUST Ph.D. students as leading researchers supervised by Associate Professor of Chemical Science Kazuhiro Takanabe--collaborated with other colleagues from the Catalysis Center and other specialists in the University to create a hydrogen-evolution reaction catalyst that is both acid-tolerant and selectively prevents the water-reforming reaction1.

"The development of acid-tolerant catalysts is an important challenge because most materials are not stable and quickly degrade in the acidic conditions that are favorable for hydrogen generation," says Garcia-Esparza.

Because the acidity of the solution was crucial for the stability of the material, the team took the time to establish the optimal pH level between 1.1 and 4.9. They then electro-coated molybdenum onto a standard platinum electrode catalyst in a mildly acidic solution.

Comparing the performance of the photocatalyst with and without the molybdenum coating, the team showed that without molybdenum the rate of hydrogen production eventually plateaued after 10 hours of operation under illumination by ultraviolet light. However, the introduction of molybdenum prevented this fall in performance. The researchers believe that this is because the molybdenum acts as a gas membrane, preventing oxygen from reaching the platinum and disrupting its catalytic performance.

"The main challenge for most catalysts is the long-term stability of the materials" explained Garcia-Esparza. "So it is an important step to have an acid-tolerant material capable of preventing the water-forming back reaction that slows down water splitting."

"Nevertheless, we are still far from a commercial device and more work needs to be done," said Garcia-Esparza.