Keeping Track of Position Even After Power Loss

Figure 1. The multiturn principle of the operation

­Position sensors and encoders are ubiquitous in automotive and industrial applications where it is vital that the position of the system is known at all times. However, incumbent position sensors and encoders can only provide a single turn or 360° TPO position information. Systems that require TPO position information over multiple rotations or wider measurement range typically incorporate a backup power supply to track and memorize the multiple rotations of the single turn sensor after an unexpected loss of power, or to track multiple turn movement during key-off or power-down. Alternatively, a gear reduction mechanism can be added to the system to reduce the multiple rotations to a single turn, and in combination with a single turn sensor, to find TPO multiturn position information. These solutions are expensive and bulky, and, in the case of the battery backup system, a regular maintenance contract is required.

Rotary and linear encoders are key devices used in applications where the system designer needs to ensure that the position of a mechanical system is always known for closed-loop control, even after a loss of power either as part of the normal operating cycle or accidental. The challenge for system designers is to ensure that the TPO position is available even after a loss of power. If the system state is lost, then a lengthy and often complex procedure is required to reset the system into a known state.

Modern factories are becoming more dependent on robots and cobots to reduce cycle times, increase factory throughput, and improve efficiency. One of the major costs and inefficiencies associated with standard robots, cobots, and other automated assembly equipment is the resulting downtime required for rehoming and intializing power-up following a sudden loss of power while operating. This resulting downtime and productivity loss are both costly and inefficient. Although this issue can be solved with backup batteries, memory, and single turn sensors, these solutions have their limitations. Battery packs have a limited lifespan, and maintenance/service contracts are required to manage the battery replacement. In certain environments, where there is a risk of explosion, the maximum energy that can be stored in the battery pack is limited. The reduction in energy storage leads to a shorter maintenance cycle where the batteries must be replaced more frequently.

An alternative to battery backup is the use of Wiegand wire energy harvesting modules. These modules make use of a specially treated wire where the magnetic coercivity of the outer shell is much higher than the coercivity of the inner core. The different coercivities create voltage spikes at the device output when a magnetic field is rotated. The spikes can be used to power external circuitry and record the number of turns in a ferroelectric random-access memory (FRAM). The magnetic multiturn memory that has been developed by Analog Devices requires no external power to record the number of rotations of an external magnetic field. This leads to a reduced system size and cost.

As the domain walls move through the spiral leg structures, the state of each spiral leg element changes. Since the elements are fabricated from GMR material, the state of each one can be determined by measuring their resistance. The sensor relies only on the external magnetic field, and no additional backup power or energy harvesting technique is needed for the turn counting operation. When power is reapplied to the sensor, a reading of the turn count state is available with no further user actions or system resetting required.

The top level block diagram of the ADMT4000, shown in Figure 2, combines theearlier described GMR multiturn sensor with a highly accurate AMR angle sensor and integrated signal conditioning IC to provide a solution that is capable of recording 46 turns or 16,560° of movement with a typical accuracy of ±0.25°. The integrated signal conditioning IC enables further system enhancements to support harmonic calibration, which can remove errors due to magnetic and mechanical tolerances from the application. The ADMT4000 provides absolute 46 turn (0° to 16,560°) digital output via an SPI or SENT interface. The ADMT4000 is positioned opposite a dipole magnet mounted to the rotating shaft as depicted in Figure 3. 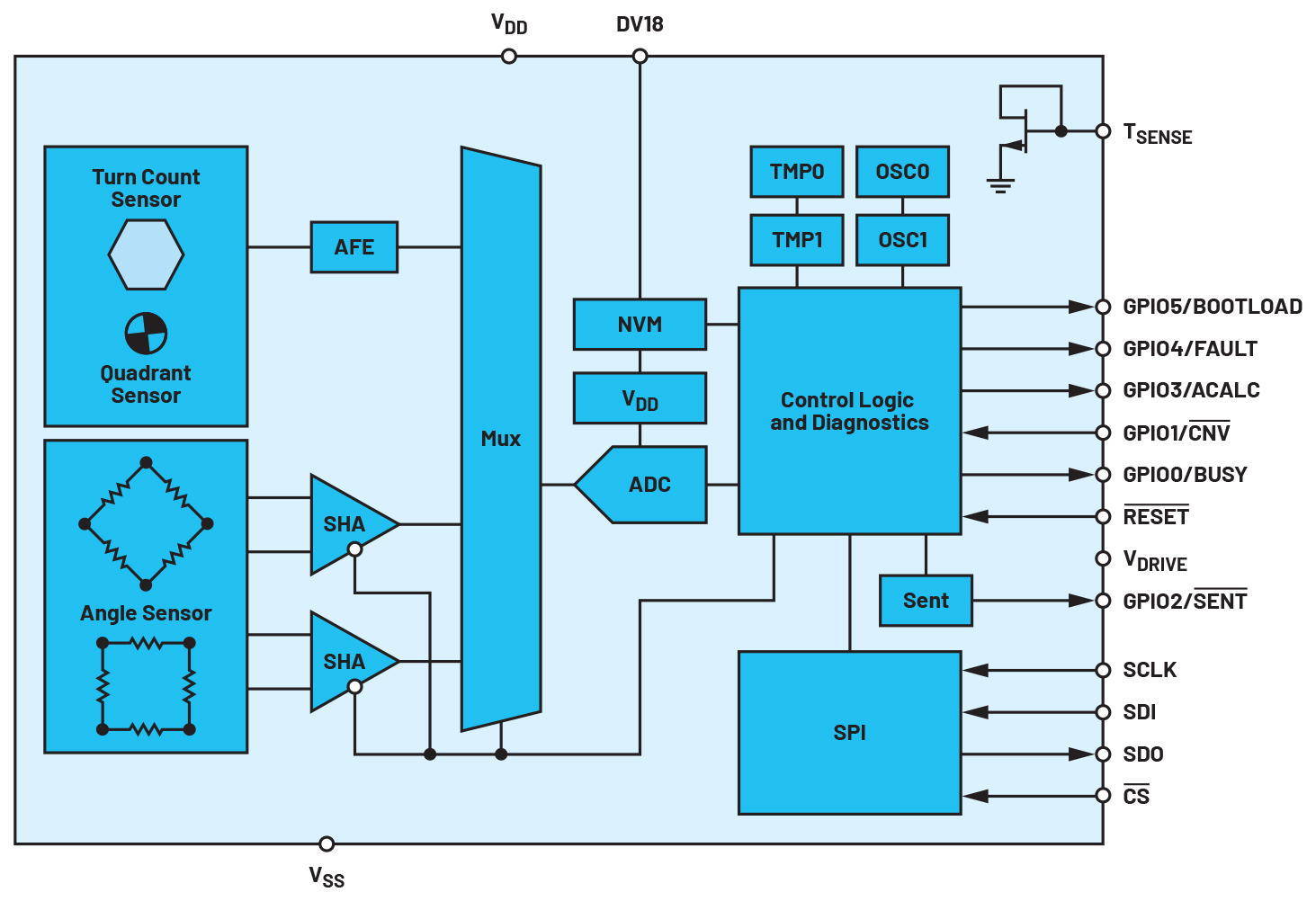 ADI is preparing a magnetic reference design that will enable users with little or no magnetic design capability to easily adopt the ADMT4000 in their application. In addition to the core magnet design, this reference design will also provide immunity and robustness to stray magnetic fields, which will allow customers to implement the sensor in harsh environments. Stray fields can be generated from many sources where currents are carried in a wire, in particular, when used in close proximity to electric motors or actuators. 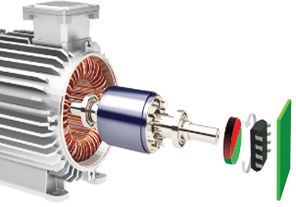 Additionally, TPO position sensing provided by the ADMT4000 is of significant value for automotive applications including, but not limited to, transmission actuators, electrical power steering (EPS) including steer-by-wire (Figure 4), parking lock actuators, other general-purpose actuators, and seatbelt retractors (Figure 5). 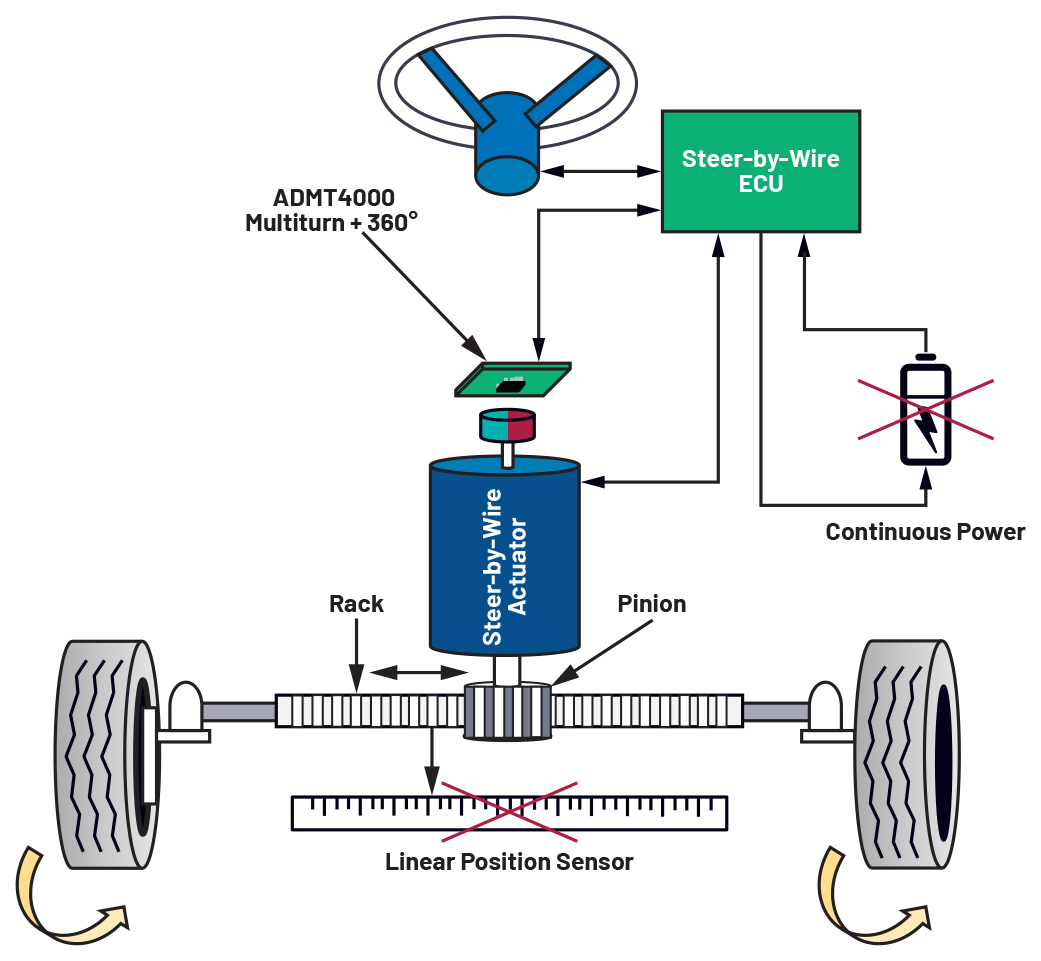 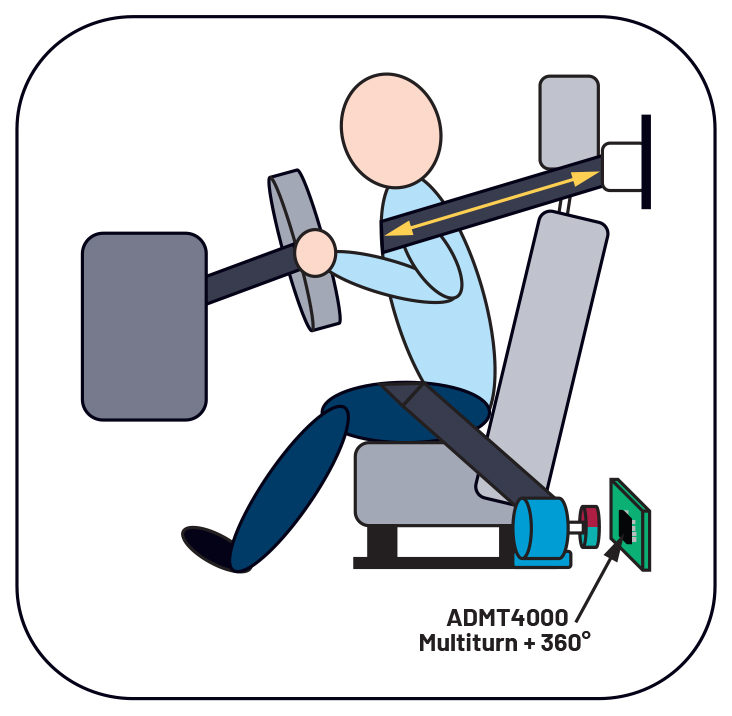 The ADMT4000 and the first integrated TPO multiturn position sensor are set to significantly reduce system design complexity and effort, ultimately resulting in smaller, lighter, and lower cost solutions. The ease of use of the ADMT4000 will enable designers with and without magnetic design capability to add new and improved functionality to current applications and open the door to many new applications.