KIST Gets Robot to Trap Ball Without Coding 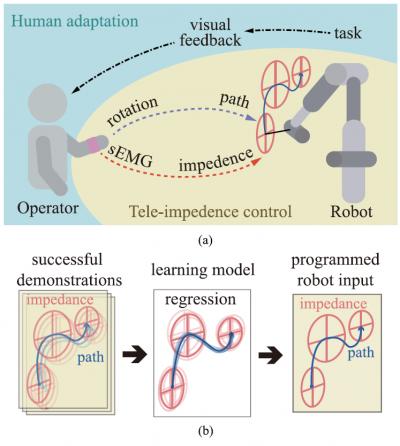 This research outcome shows that robots can be intuitively taught to be flexible by humans, as it was not accomplished through numerical calculation or programming of the robot's movements.

Dr. Kee-hoon Kim's team at the Center for Intelligent & Interactive Robotics of the Korea Institute of Science and Technology (KIST, President Byung-gwon Lee) developed a way of teaching "impedance-controlled robots" through human demonstrations using surface electromyograms (sEMG)* of muscles and succeeded in teaching a robot to trap a dropped ball like a soccer player.

Recently developed impedance-controlled robots have opened up a new era of robotics based on the natural elasticity of human muscles and joints, which conventional rigid robots lack. Robots with flexible joints are expected to be able to run, jump hurdles and play sports like humans. However, the technology required to teach such robots to move in this manner has been unavailable until recently.

The KIST research team became the first in the world to develop a way of teaching new movements to impedance-controlled robots using human muscle signals. With this technology, which detects not only human movements but also muscle contractions through sEMG, it has now become possible for robots to imitate movements based on human demonstrations.

Dr. Kee-hoon Kim's team has succeeded in using sEMG to teach a robot to quickly and adroitly trap a rapidly falling ball before it comes into contact with a solid surface or bounces too far to reach -- similar to the skills employed by soccer players.

SEMG sensors were attached to a man's arm, allowing him to simultaneously control the location and flexibility of the robot's rapid upward and downward movements. The man then "taught" the robot how to trap a rapidly falling ball by giving a personal demonstration. After learning the movement, the robot was able to skillfully trap a dropped ball without any external assistance.

This research outcome, which shows that robots can be intuitively taught to be flexible by humans, has attracted much attention, as it was not accomplished through numerical calculation or programming of the robot's movements. This study is expected to help advance the study of interactions between humans and robots, bringing us one step closer to a world in which robots are an integral part of our daily lives.

Kim said, "The outcome of this research, which focuses on teaching human skills to robots, is an important achievement in the study of interactions between humans and robots."