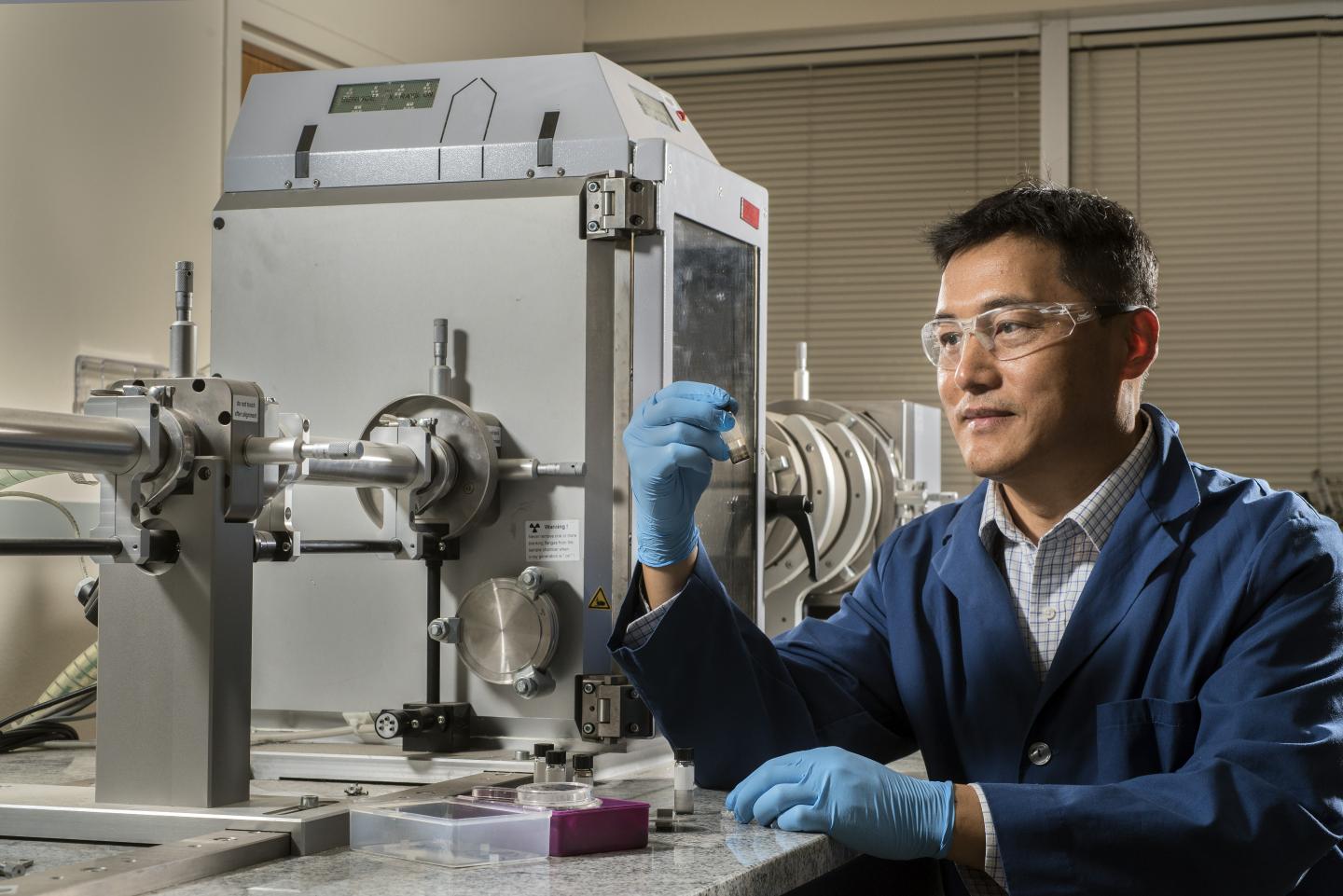 Sandia National Laboratories researcher Hongyou Fan holds a vial of gold supercrystals he will characterize in the X-ray scattering instrument to his right.

ALBUQUERQUE, N.M. -- Using an artful combination of nanotechnology and basic chemistry, Sandia National Laboratories researchers have encouraged gold nanoparticles to self-assemble into unusually large supercrystals that could significantly improve the detection sensitivity for chemicals in explosives or drugs.

Other researchers previously reported forming gold supercrystals but only in the micron range, too small for commercial production, said Fan, whose submillimeter supercrystals are easily manipulated with industrial tools of the macroworld.

The benchtop sensors, recently reported in Nature Communications, also are surprisingly inexpensive, Fan says. "The supercrystals are built of gold, but only a little of it." It takes 0.012 grams of gold to form a sensor, for a total materials cost of roughly 50 cents.

To form each of the Sandia supercrystals, millions of gold nanoparticles tightly self-assemble in orderly rows. The particles naturally develop facets -- resembling those cut in diamonds by a jeweler -- to exist at the lowest possible energy level needed to maintain the existence of the crystal.

The facets are adept at recognizing and transmitting signals. They "bay" in groups like hounds -- that is, emit a strong signal -- when a predetermined external frequency is "sniffed." That is because when a nanoparticle recognizes a band frequency and makes it resonate, that energy will pass to other nanoparticles, coupled by nearness and the local electromagnetic field. The alerted nanoparticles augment the response in a kind of echoing action, making noticeable what in less keen sensors may have passed unnoticed.

The initial formation of the crystals involves dispersing gold particulates about 5 nanometers in diameter into a "good" solvent, toluene. They then are subjected to a bath in a "hostile" solvent, isopropanol, which the particles supersaturate and from which they are then ejected or precipitated.

The ejected particles, refugees from the solution, then crystallize as small seeds. The growth of facets makes them available to respond to a wide variety of incoming chemical odors or light band frequencies.

The proper concentrations of materials and particle immersion times are important factors in creating large crystals. The process may take as long as a week.