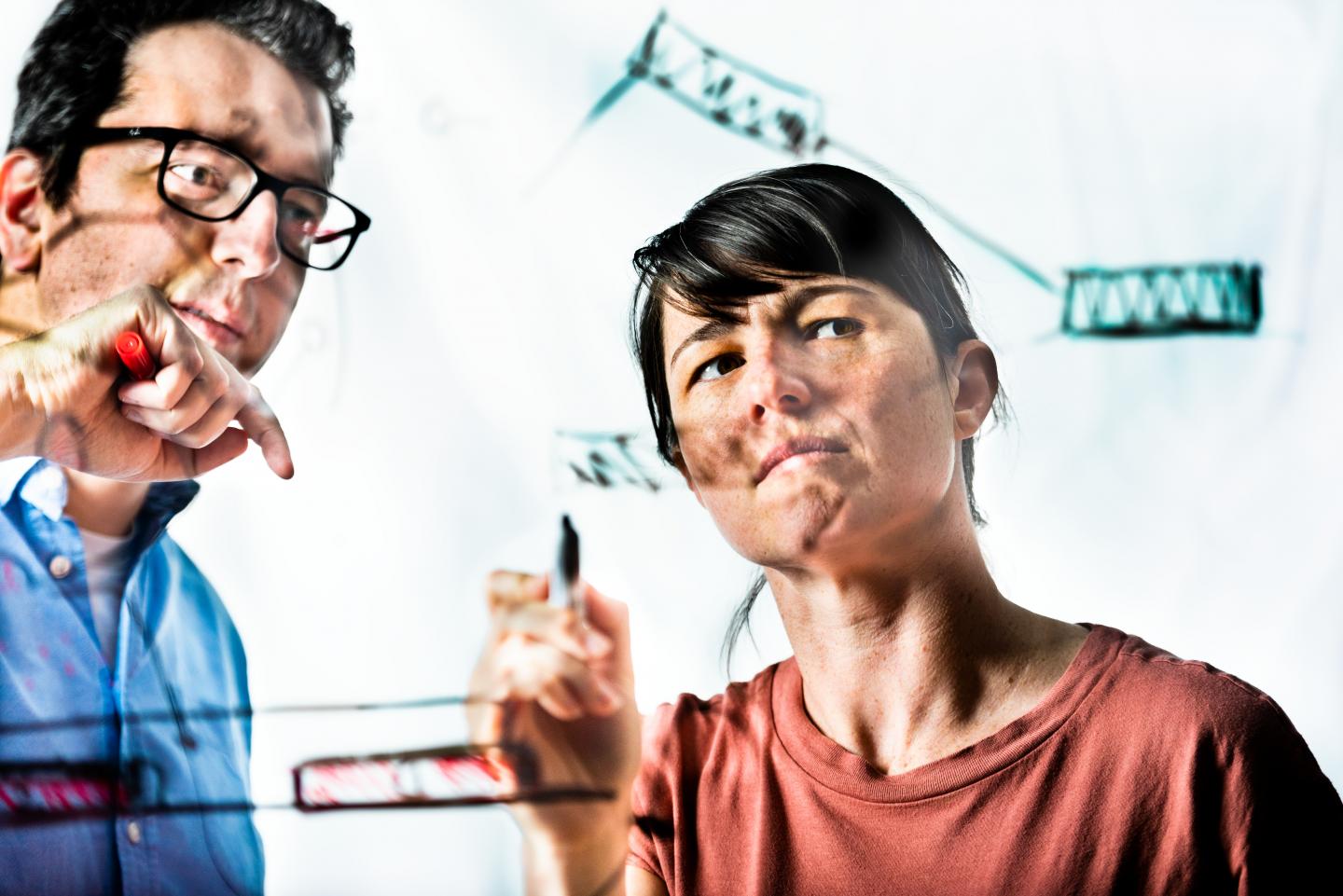 Simone Fabiano and Jennifer Gerasimov have developed a learning transistor that mimics the way synapses function.

A new transistor based on organic materials has been developed by scientists at Linköping University. It has the ability to learn, and is equipped with both short-term and long-term memory. The work is a major step on the way to creating technology that mimics the human brain.

Until now, brains have been unique in being able to create connections where there were none before. In a scientific article in Advanced Science, researchers from Linköping University describe a transistor that can create a new connection between an input and an output. They have incorporated the transistor into an electronic circuit that learns how to link a certain stimulus with an output signal, in the same way that a dog learns that the sound of a food bowl being prepared means that dinner is on the way.

A normal transistor acts as a valve that amplifies or dampens the output signal, depending on the characteristics of the input signal. In the organic electrochemical transistor that the researchers have developed, the channel in the transistor consists of an electropolymerised conducting polymer. The channel can be formed, grown or shrunk, or completely eliminated during operation. It can also be trained to react to a certain stimulus, a certain input signal, such that the transistor channel becomes more conductive and the output signal larger.

"It is the first time that real time formation of new electronic components is shown in neuromorphic devices", says Simone Fabiano, principal investigator in organic nanoelectronics at the Laboratory of Organic Electronics, Campus Norrköping.

"We have shown that we can induce both short-term and permanent changes to how the transistor processes information, which is vital if one wants to mimic the ways that brain cells communicate with each other", says Jennifer Gerasimov, postdoc in organic nanoelectronics and one of the authors of the article.

By changing the input signal, the strength of the transistor response can be modulated across a wide range, and connections can be created where none previously existed. This gives the transistor a behaviour that is comparable with that of the synapse, or the communication interface between two brain cells.

It is also a major step towards machine learning using organic electronics. Software-based artificial neural networks are currently used in machine learning to achieve what is known as "deep learning". Software requires that the signals are transmitted between a huge number of nodes to simulate a single synapse, which takes considerable computing power and thus consumes considerable energy.

"We have developed hardware that does the same thing, using a single electronic component", says Jennifer Gerasimov.

"Our organic electrochemical transistor can therefore carry out the work of thousands of normal transistors with an energy consumption that approaches the energy consumed when a human brain transmits signals between two cells", confirms Simone Fabiano.

The transistor channel has not been constructed using the most common polymer used in organic electronics, PEDOT, but instead using a polymer of a newly-developed monomer, ETE-S, produced by Roger Gabrielsson, who also works at the Laboratory of Organic Electronics and is one of the authors of the article. ETE-S has several unique properties that make it perfectly suited for this application - it forms sufficiently long polymer chains, is water-soluble while the polymer form is not, and it produces polymers with an intermediate level of doping. The polymer PETE-S is produced in its doped form with an intrinsic negative charge to balance the positive charge carriers (it is p-doped).