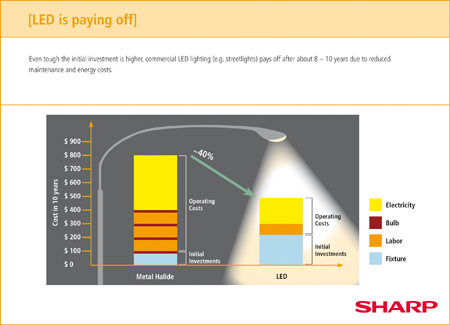 A power-saving, environmentally friendly, long-life, compact and (above all) cost-effective light source - LEDs have created an entirely new generation of lamps. According to the International Energy Agency (IEA), around 2650 terrawatt hours are used across the world every year for lighting alone. A consumption level with enormous potential for savings: in comparison to traditional light sources such as electric filament lamps, fluorescent tubes, halogen lamps, sodium and mercury vapour lamps etc, modern light sources only need a maximum of just less than half the energy. LEDs are one of the light sources with the highest energy efficiency on the market today. With a lighting efficiency of up to 105 lumens per watt depending on the module, the Sharp LEDs are at the forefront of today's LED lighting. They use only 11% of the power used by normal bulbs. Even conventional energy saving lamps still use twice as much as LEDs.

In addition to high energy efficiency, a long-term advantage of using LEDs as a light source is their long life cycle. For example, Sharp LED modules provide at least 40,000 hours of light at a substrate temperature of up to 80°C, depending on the module. Despite the comparatively high purchase costs, using LEDs as a light source pays off throughout their total life cycle.

According to Sharp's calculations, LED lights already have an advantage after approximately 1,500 operating hours over incandescent lamps in terms of costs. Even in comparison to fluorescent tubes, the break-even point for costs is around 8,000 operating hours, i.e. after a sixth of the life cycle of LED lights. Considering the high maintenance costs for hard-to-access applications such as streetlights, where changing the light source is extremely time-consuming, the total cost savings generated by LEDs in comparison to traditional light sources come to a total of around 38 percent. Some utilities companies are already converts: EnbW in Baden-Württemberg and the Italian company Enel Sole have already initiated pilot projects for LED-based street lighting. The latter intends to install 40,000 streetlights with LEDs as the light source over the next two years.

In principal, LEDs are suitable for universal use as light sources for lamps, not just in streetlights: in interior spaces, e.g. for study, reading and desk lamps, decorative lighting, direct and indirect lighting for work benches in kitchens etc., as spotlights for stages and building sites or as components for large LED based displays. The LED modules are also a long-lasting solution for reading lamps on public transport such as trains, aeroplanes and buses. However, the different applications have their own individual requirements for light output, colour temperature and form factor. For the wide range of lighting applications, Sharp provides a correspondingly wide range of LEDs for lighting purposes. This comprises a total of approximately 50 different types, from white-light LEDs with a light output of 3.5 lumens to the high brightness modules with up to 540 lumens in five different categories of Wattage: <0.1 W, 0.5 W, 0.8 W, 3.6 W and 6.7 W. Only recently Sharp introduced two new series of LED modules: the Minizeni (as a smaller sized Zenigata) and the DoubleDome to address e.g. retrofit bulb and down light solutions respectively area light applications.

Despite all the differences, all LEDs have the same design in principle: they consist of a blue diode with a phosphorus coating. In addition to conventional yellow phosphorus, Sharp also uses a mixture of red and green phosphorus. This means that Sharp diodes cover a wider area of the natural colour space. In addition, LEDs can be manufactured in a large range of different colour temperatures. With traditional light sources, the physical properties of the gas filling and/or of the coatings of the glass skin determines the wave spectrum of the light, which provides only a small amount of leeway in the adjustment of the light properties. With white-light LEDs, specific colour temperatures can be achieved by altering the proportions of red and green phosphorus in accordance with the relevant mixture. Theoretically, white-light LEDs can be manufactured with a specific colour temperature for every application. In practice, Sharp supplies white-light LED lighting modules in four shades - ‘Normal White light', ‘Warm White light', comparable to a light bulb, and two shades in the field of ‘High Colour Rendering White' - whereby the colour temperature lies in the range of 2,200 to 11,500 Kelvins. Light sources with warm white light up to approx. 3,000 K are mainly suitable for lighting living spaces, light sources in the average temperature range of 3,000 - 5,000 K are intended for use in general commercial lighting applications such as those in offices, public buildings and factories, whereas cooler colour tones of 5,000 K and more are particularly suitable for applications whereas high contrasts are required, e.g. in the medical sector. By means of varying phosphorus mixtures, various ‘High Colour Rendering' LEDs from the Zenigata and Minizeni series attain a CRI level of up to 90 and thereby provide high colour fastness and fidelity to detail. In general, all modules of the new Minizeni and DoubleDome series as well as all Zenigata and SAE products feature a CRI level of 80+. This is of significance in all circumstances in which artificial light may not falsify the depiction of the illuminated objects. ‘High Colour Rendering' LED modules are for that reason particularly popular in areas such as photography, window-dressing for shops and the presentation of goods, and also in medical technology e.g. for OP lamps.

The compact design of LEDs provides designers with new freedom in the design of their light sources. Instead of designing lamps as a shield around comparatively large-format light sources, LEDs need only little space for mounting and therefore do not necessarily determine the overall form of the lighting application. This also means that integration into, for instance, items of furniture, ceilings, as reading lamps in car roof interiors etc., becomes substantially easier. 'Type 3228' Sharp LED modules measure as little as 3.2 x 2.8 x 0.9 millimetres. The smallest components in the white-light diode range are Ultra Small Package LEDs, with an edge length of 1.6 x 0.8 x 0.2 millimetres. Even the high brightness module from the Zenigata series, measuring 18 x 18 x 2 millimetres, is much more compact than the traditional illuminants. Furthermore, LED-based lamps are much less complex systems: the starters that are needed for fluorescent tubes and low-energy light bulbs are unnecessary here.

In total, the Sharp LED lighting module range comprises just fewer than 50 different types. The greatest light output is provided by the 540 lumens series from the Zenigata series. This module has a light output of up to 540 lumens with 6.7 watt power consumption, achieving a level of brightness equivalent to traditional 40 - 60W light bulbs. Its little sisters from the 280 lumens series are similar in design, with 3.6 watt power consumption and a level of brightness equivalent to 30 - 35W light bulbs. The smallest components in the Sharp LED lighting range are the 3228 LED chips with a light output of 3.5 lumens upwards and a radiation angle of 120°. Sharp achieves this high flexibility in light source design through the modular design of its LED components. The basic modules are individual blue LED dies coated with phosphorus, wired into a matrix fixed to a suitable substrate. For example, the high brightness module from the Zenigata series consists of 48 dies for the 6.7 watt versions, while the 3.6 watt models only use 30 dies and other models even less, connected in series or in parallel depending on the model.

Given their energy-saving potential and long life cycle, LEDs will rapidly gain in significance as light sources for general lighting and lamps. By 2012, lighting applications will grow to a volume of approx. USD 1.4 billion with a proportion of 12 percent on the overall LED market. Crucial for their breakthrough on the market-place for light sources is the light output of the LEDs - what manufacturers want here is an efficiency of 100 lumens per watt and more. Once this hurdle has been overcome, the advantages of the LEDs are overwhelming: long life cycle, compact form factor, low system complexity, high energy efficiency, no pollutants and finally a wide range of different colour temperatures. Monochrome colour and RGB 3-chip LEDs will also allow the creation of designer light effects that would simply not have been possible to this extent with traditional light sources. With the introduction of its LED lighting modules, Sharp is providing numerous marketable solutions for the use of LEDs as light sources for lamps. Used as light sources in so-called retrofit lamps, it is already possible today to substitute conventional light bulbs and energy saving lamps with LED lamps so that consumers can also directly benefit from the advantages that the new light source technology is ushering in. www.sharpsme.com