Less is More When it Comes to Predicting Molecules' Conductivity 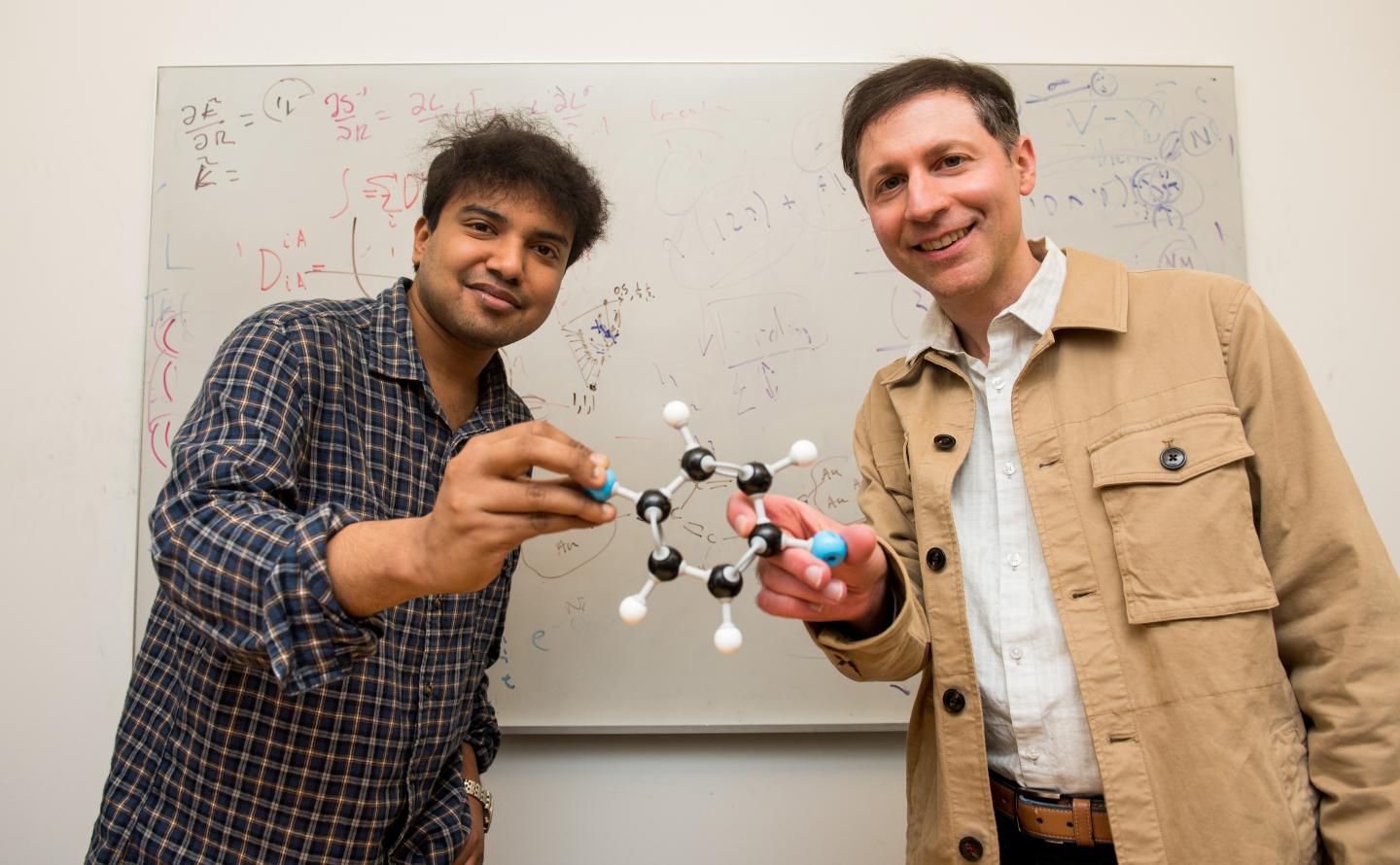 UChicago grad student Manas Sajjan, left, and prof. David Mazziotti, hold a model depicting a molecule on which they tested a better approach for predicting conductivity.

The smaller and smarter that phones and devices become, the greater the need to build smaller circuits. Forward-thinking scientists in the 1970s suggested that circuits could be built using molecules instead of wires, and over the past decades that technology has become reality.

The trouble is, some molecules have particularly complex interactions that make it hard to predict which of them might be good at serving as miniature circuits. But a new paper by two University of Chicago chemists presents an innovative method that cuts computational costs and improves accuracy by calculating interactions between pairs of electrons and extrapolating those to the rest of the molecule.

"Current models tend to overpredict conductance, but our theory outperforms traditional models by as much as one to two orders of magnitude," said Prof. David Mazziotti, who coauthored the paper, published May 17 in Nature's Communications Chemistry.

Everything from better computer chips and batteries to greener ways to produce chemicals depends on discovering new kinds of chemistries and materials, and scientists increasingly look to computers to search for new combinations more efficiently. Instead of trying permutations one by one, they can run models that predict the best options.

But it's a delicate art, because in many cases these calculations can consume computing time alarmingly fast. In molecules with a lot of interacting electrons, "you can very quickly end up with the computation size increasing exponentially with the size of the molecule," Mazziotti said.

Mazziotti and graduate student Manas Sajjan set out to simplify, creating a method for predicting molecular conductivity that uses the interaction between two electrons to represent all of the interactions. "To take one example, for a particular molecule the traditional method might require computing with 1024 variables, whereas ours has 109 variables--a quadrillion fewer variables," Sajjan said. That's the difference between a problem for which you need a supercomputer versus one you can do on a laptop.

This choice allows an unusual but powerful approach. Existing theories for molecular conductivity assign a set number of voltage applied to the molecule to predict a number for the current that could then flow through it. Sajjan and Mazziotti flipped this paradigm on its head. They fixed the current first, and then computed the voltage. This turns out to be much more accurate: When they checked their method with a well-known molecule, they saw it outperformed traditional methods by one-to-two orders of magnitude.

"Almost all of the big problems that people are trying to solve involve working with materials that are difficult to explore with traditional methods," he said. "If we can better predict the conductivity, we can more effectively design better molecules and materials."