Lighting Control - How much do you need? 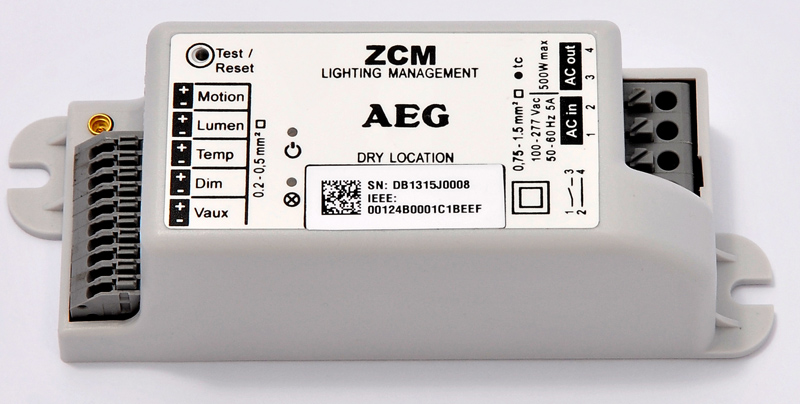 Lighting controls are becoming ever more sophisticated with the capability to provide real-time data on system status, settings, light levels, energy consumption, etc. For some applications this level of sophistication is extremely beneficial but there are many applications where a simpler approach can pay off. This article describes a wireless lighting control system that can offer a high degree of flexibility and control capability without the complexity of some centralized systems. In the past, lighting has been seen as a market with little need for sophisticated power management. All that was needed was a fuse or circuit breaker, a switch and possibly a dimmer. This is rapidly changing with the advent of dimmable electronic rather than magnetic ballasts for fluorescent and HID lights, and most recently with the increasing adoption of LED lighting. Every LED luminaire requires a DC power source with well-controlled output current, and in most cases industry regulations also dictate control of power factor, standby power, harmonics and efficacy in terms of light output (lumens per watt). One of the main drivers for new lighting technologies is of course the global focus on reduced energy consumption together with reductions in CO2 emissions. In addition to the energy savings inherent in the new technologies, there is now a rapidly increasing focus on controlling the light levels to more closely follow the needs of the users. This takes it one step beyond efficiency of light production, to consider the effectiveness in terms of light levels actually needed. The days of lights blazing all night in empty offices and unused parking garages are coming to an end. A basic feature set A modern lighting control system must provide a number of basic features: control of brightness in response to time of day, ambient light level and presence of users; ability to configure the response to suit a particular location; and simple installation and setup. In addition to these basic features, it is desirable to be able to operate with a wide range of luminaires and with different lighting technologies. The lighting technology itself will dictate the degree of control that can be achieved, from fully dimmable LED lighting with virtually instantaneous response, to legacy HID lighting with magnetic ballast that can take several minutes to switch on and cannot be dimmed. To cover the widest possible range it makes sense to have a dedicated, programmable control module that can interface with any standard lighting ballast or driver through a standard control interface, such as the analog 0-10V standard or the digital DALI interface. It also makes sense to include a relay to switch power to a non-dimmable lamp n this same relay can completely shut down power to a dimmable driver to reduce standby consumption. Flexible configuration dictates a programmable system, while simple installation is best achieved with wireless control since it avoids the need to install dedicated control wiring. There are many different wireless options available, some of which are proprietary, and others that are based on industry standards. There are obvious benefits in the use of a standard wireless communication protocol, both in terms of the readily available components and the extensive testing carried out by the standards consortium.

Wireless luminaire considerations However, the published standards generally only define the protocol used and other factors such as the output power, the antenna and the mounting into the luminaire are critical in ensuring reliable communication in field conditions. Several manufacturers offer this kind of wireless module, for example the one shown in Figure 1. The control module itself determines the basic capabilities of the system, and must have sufficient capacity and features to support the intended lighting installation. The module illustrated is based on a wireless mesh network standard, and uses an external antenna to provide optimum performance and flexibility. It operates from wide range AC input, and can switch up to 5A/500W of lighting load. It has a standard 0-10V dimming output, and includes inputs for motion sensor, lumen sensor and temperature sensor. The auxiliary output can be switched to 5V, 12V or 24V for added flexibility in choice of sensors. This module provides the hardware interface, but most of the functionality comes from the firmware in the module, while user convenience is determined mainly by user-interface software. There are two basic approaches to the software: a standalone system that can be configured and then left to operate; or a fully comprehensive central system that provides real-time data collection, as well as remote monitoring via the internet. 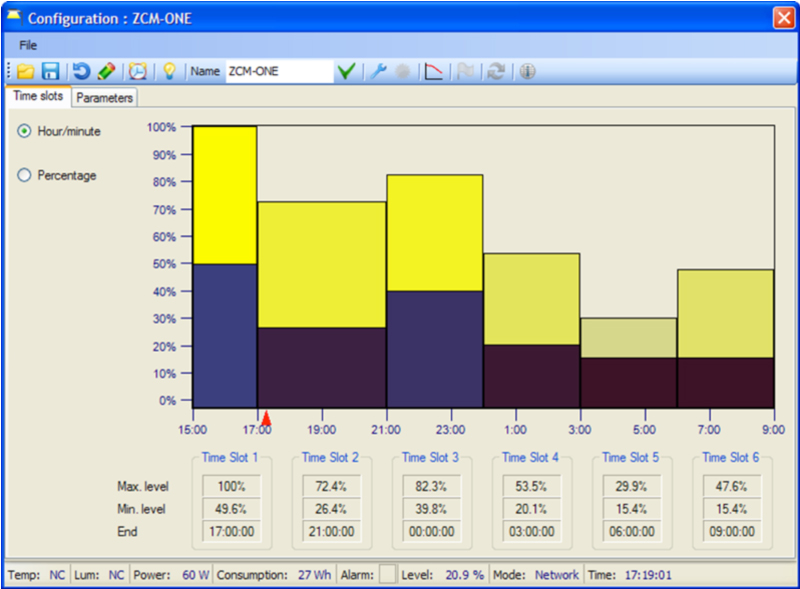 Right-size your design A well-designed standalone system can provide all the flexibility and lighting control options needed in smaller installations, and can avoid the added costs and complexity associated with the central monitoring system. It is not always necessary to be able to measure the instantaneous power consumption and present the data in a graphical format, or to be able to monitor the system status from the other side of the city or the other side of the country. For these less-demanding applications what is more important is a user interface for programming that is as simple and convenient as possible. For example, the interface shown in Figure 2 uses a drag-and-drop approach to set the brightness levels in different timeslots through the night, and to adjust the duration of the timeslots. There are two brightness levels in each timeslot, the lower when there is no motion and the higher when there is motion. This software runs on a standard PC (no need or expense of an additional gateway) and communicates with the luminaire module using a wireless USB dongle. An equally simple screen allows linking between sensors and lights just by a series of check-marks in a table, as shown in Figure 3. A final screen allows the user to configure the response to the motion sensor and lumen sensor, shown in Figure 4. Once the system has been configured, the PC can be removed and the lights will continue to operate as they have been programmed. There is no need for further intervention unless the user wants to change some of the settings. This system also provides a readout showing the current conditions including power consumption, temperature, brightness setting, and internal time. This information can be useful during setup, and can also help with troubleshooting when necessary. Other features include the ability to assign a name to each luminaire, programmable compensation for LED lumen degradation, and the ability to store and recall parameter settings at will. This type of simple lighting control can never provide all the features needed or wanted by everyone in every application. Its strength is to be cost-effective in those applications where the main focus is on return on investment through energy savings, and where centralized monitoring is a lower priority. AEG Power Solutions 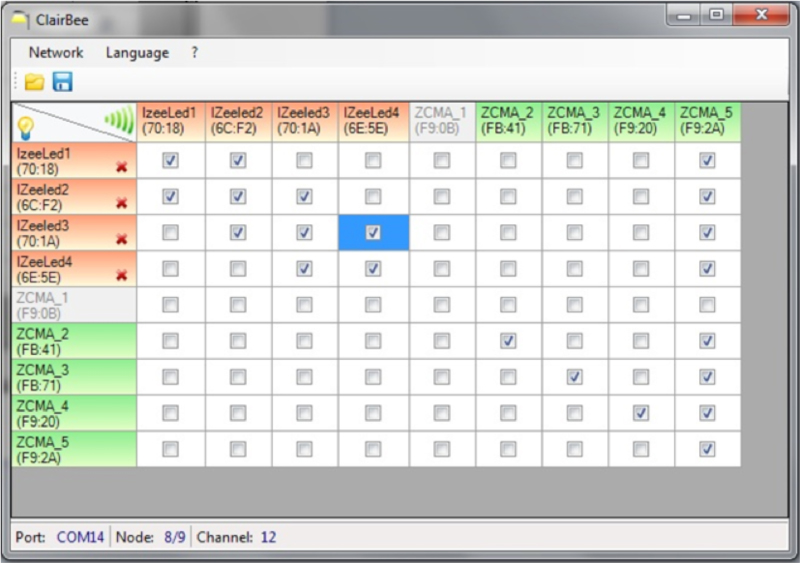 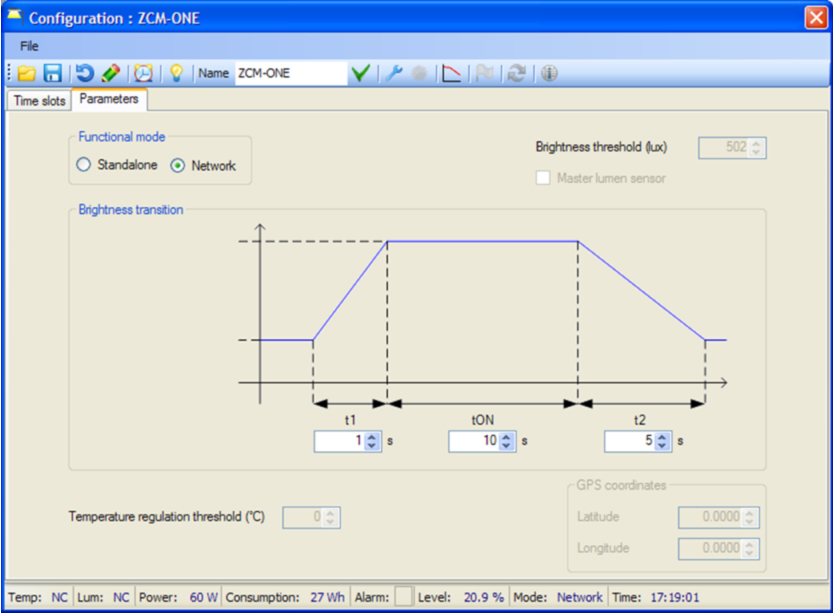