Lighting - From Stadiums to Vegetables 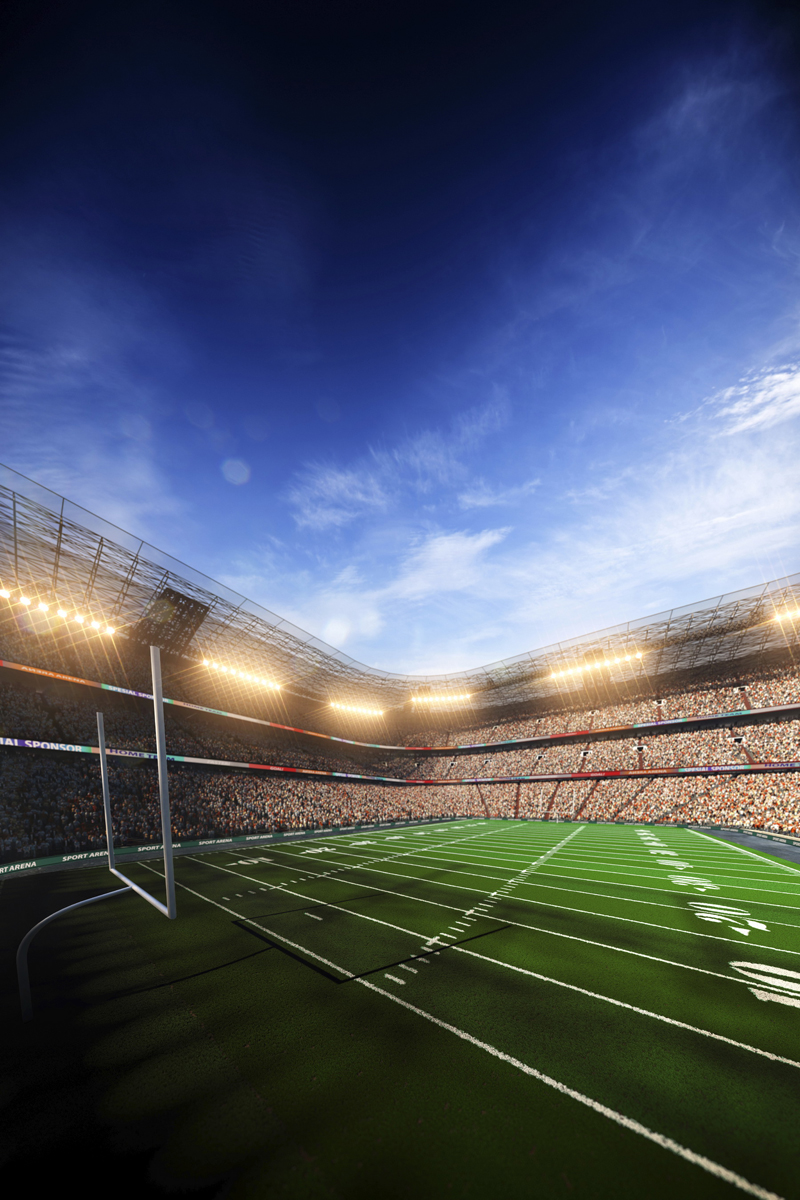 The lighting market segment is very diversified, but Solid State Lighting (SSL), based on LEDs, has made the Edison bulb effectively obsolete and is now infringing on areas where fluorescent lighting excels. The possibilities offered by SSL bring advantages in industrial applications, such as for roads and parking lots, stadiums and stages (Figure 1), as well as for urban farming, horticulture, water purification, and medical lighting and light therapy.

When electrons meet photons, it requires power designers to work very closely with LED manufacturers. A good example of this intersection is “GaN (Gallium Nitride) lighting”, which uses GaN transistors in the power stage, and GaN-on-Silicon in the LED element. It reflects the industrial maturity of GaN in both the power and lighting industries. For power designers, it is interesting to follow both technologies and there could be huge benefits in that association.

SSL lighting currently dominates some segments of the lighting market where the cost of replacing a light bulb is inordinately expensive and could cost the end user more than the light itself. Lights on tall poles where a lift truck is required to even reach the lighting fixture is an example of this. Having to stop or reroute traffic on a bridge or in a tunnel is another example. These types of applications benefit from having very long lasting SSL  Additionally, SSL is much more efficient than the typical high pressure light that it is replacing, so the power consumption for providing the same level of light is notably reduced, often resulting in a very good ROI for the end user as well as contributing to reduce energy consumption.

Houston's NRG Stadium (USA) became one of the first professional venues to use energy-efficient LED lights in 2015. The field was illuminated exclusively by 65.000 LED lights, consuming 337 kilowatts when at full power, which is about 60 percent less energy than the previous conventional stadium-lighting system. Future technologies will save even more energy, with 75% saving the target. The energy saved is remarkable, but it is only the beginning of what is possible when combining SSL technology and efficient power management. Larger infrastructure providers and cities are renovating their lighting systems in favour of digitally controlled SSL, and combined with renewable energy, we are approaching the mythic zero emissions lighting circle (from generation to utilisation).

Right now, there are around 7.6 billion people in the world and every year, the world’s population is expanding by 83 million people. By 2050, there will be a global population of just short of 10 billion. Providing food to 10 billion people will require agriculture to develop very efficient production processes, while preserving the environment by reducing hazardous chemicals and optimizing water utilisation.

In a recent communication, the World Bank highlighted the situation and laid out the expected future of food supply around the world. “The world needs to produce at least 50 percent more food to feed 10 billion people by 2050. But climate change could cut crop yields by more than 25 percent. The land, biodiversity, oceans, forests, and other forms of natural capital are being depleted at unprecedented rates. Unless we change how we grow our food and manage our natural capital, food security – especially for the world’s poorest – will be at risk.”

Considering all the parameters and requirement to produce food with the highest respect for the environment, in 1999, Dr. Dickson Despommier with his students developed the idea of modern indoor farming, revitalizing the term coined in 1915 by the American geologist Gilbert Ellis Bailey: “Vertical farming.” There has been a lot of articles about industrial buildings being converted into vertical farms, and there are an amazing number of technology innovations contributing to optimize the energy delivered to the plants for optimal growth. From space utilization, there is 100 times more food produced per square meter compared with regular agriculture. Water utilization is reduced by 90% and hazardous chemicals are eliminated. Indoor farming is very attractive, though to be really efficient it requires a very efficient lighting system (Figure 2). 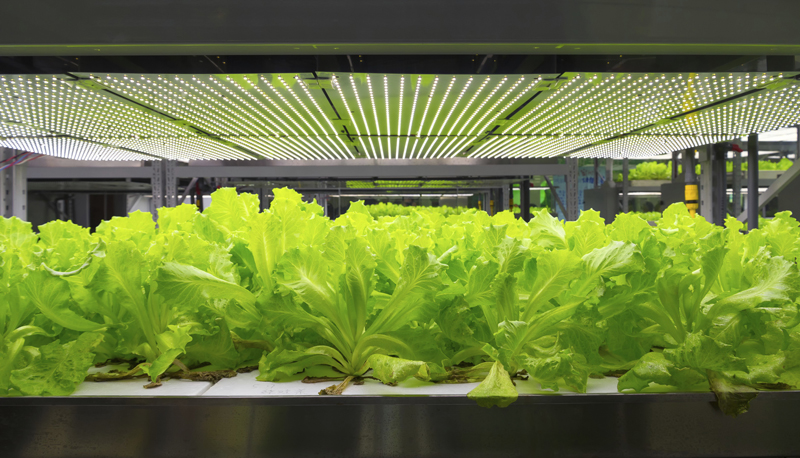 Not all vegetables can be grown with limited soil and nutrition, but for the ones that can be grown using this farming method, the results are impressive and getting even more so when using modern computer-controlled lighting technologies. For power designers this is a very interesting challenge to explore, combining advanced power electronics and modern agriculture with software.

Since its introduction, indoor farming engineers have conducted research to validate the spectrum and energy required by different plants to grow efficiently. From wide spectrum fluorescent or halogen lamps to more narrow spectrum lighting, the conventional lighting industry innovated a lot but those technologies are not flexible nor efficient enough to respond to the demand.

Following experiments in Japan from 2005-2008, agronomical researchers investigated  different lighting methods to adjust the spectrum and energy delivered to specific plants. Researchers concluded that the specific light spectrum to grow plants and vegetables typically starts at 450 nm (blue light) and goes through to 730 nm (far red) (Figure 3). The Photosynthetic Photon Flux Density (PPFD) required ranges from 50 micromoles (µmol) for mushrooms up to 2,000 µmol for plants like tomatoes and some flowers that thrive in full summer light (Figure 4). Agricultural experts tell us that for optimal results different plants types may require different light spectra as well as differing light balance and intensities between the seedling and harvesting stage. This often results in a requirement for the artificial light to have a number of different spectra channels that are individually adjustable for intensity.

Urban farms are increasingly moving to modern SSL lighting, especially as the amount of light energy per watt of power steadily increases. This increased efficacy also lowers the cooling costs as the produce yield is negatively impacted by too high air or soil temperatures. LED lighting allows the grower to use lights that only consume energy in  the spectra that the plants require, generally red and blue, thus saving energy over  delivering full spectrum lighting, where the majority of the light is not used by the plants. This goes back to the elementary school question, “Why are plants green?” (because most plants don’t absorb (use) green light and thus it is reflected back to your eyes making the plant look green). 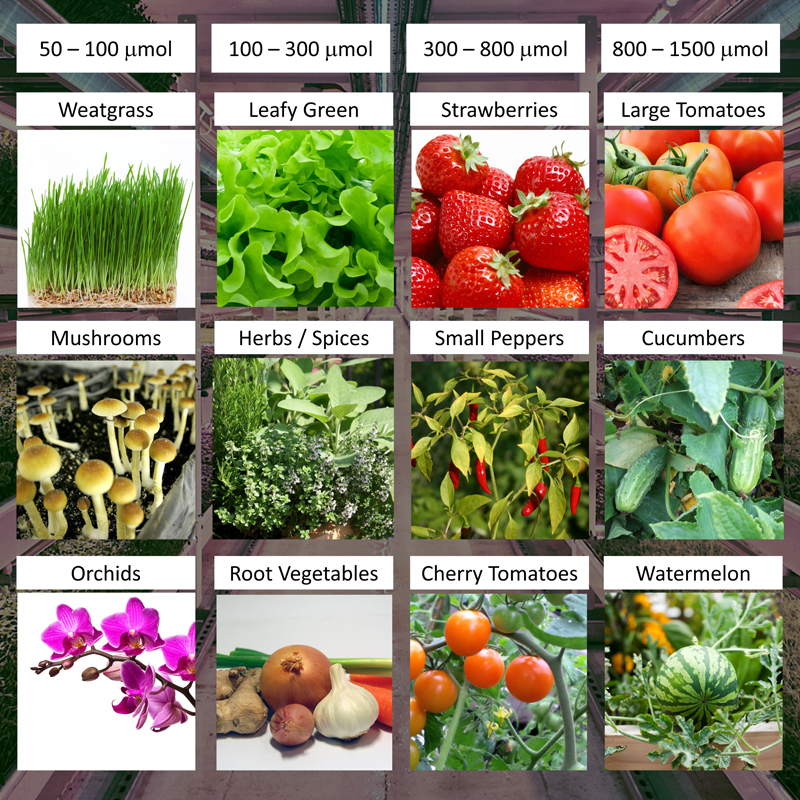 Today multiple LED lamps are commonly used to energy efficiently grow vegetables though more advancement can be achieved by integrating intelligent power sources in LED modules. One research area is to create micro-LED panels with growth index monitoring, which are able to modulate the light locally (1/2 square meter area). That will require a very efficient distributed power solution that is able to adjust all the parameters of the vegetable’s growth.

Despite a lot of articles and papers presented at conferences, indoor farming is still at its infant stage, though the demand on the agriculture to produce more with less environmental impact is an important factor in its development. The combination of the latest technologies in SSL, power management, and a software controlled environment will improve productivity and tools for modern farmers to be in position to grow food for the 10 billion people in 2050.