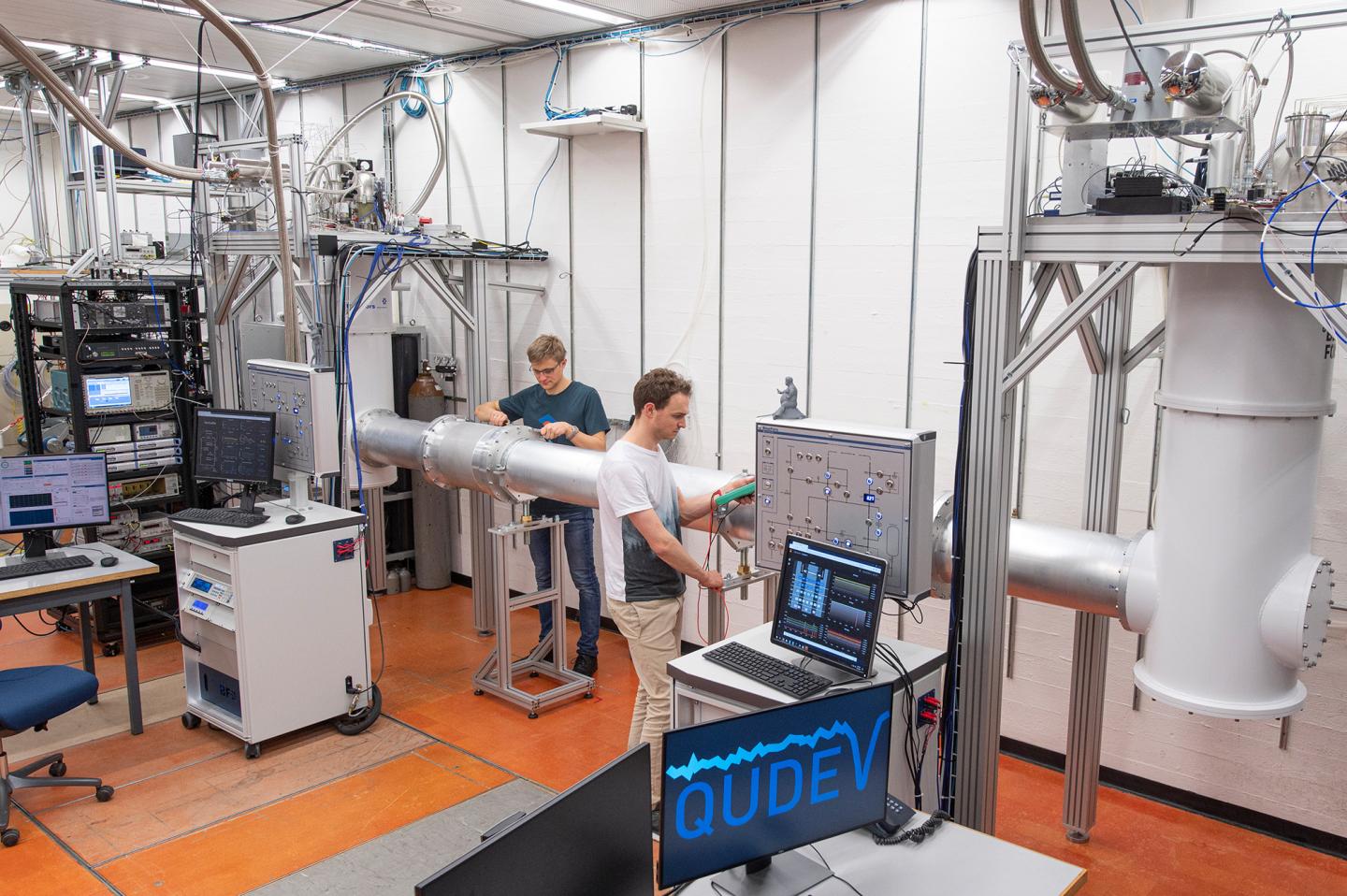 The ETH quantum link in Andreas Wallraff's laboratory. The tube at the centre contains the strongly cooled waveguide that connects the two quantum chips in their cryostats via microwave photons.

Collaboration is everything - also in the quantum world. To build powerful quantum computers in the future, it will be necessary to connect several smaller computers to form a kind of cluster or local network (LAN). Since those computers work with quantum mechanical superposition states, which contain the logical values "0" and "1" at the same time, the links between them should also be "quantum links".

The longest such link to date based on microwaves, at five metres long, was recently built in the laboratory of Andreas Wallraff, professor at the Quantum Device Lab at ETH Zurich. The researchers were scheduled to present their results on it at the annual meeting of the American Physical Society in Denver. Because of the current epidemic situation this conference was cancelled at short notice. Instead, the scientists now report their results in a virtual substitute conference.

"That's really a milestone for us", Wallraff explains, "since now we can show that quantum-LANs are possible in principle. In the next 10 to 20 years, quantum computers will probably increasingly rely on them." Currently there are computers with a few dozen quantum bits or qubits, but several hundreds of thousands of them are almost impossible to accommodate in existing devices. One reason for this is that qubits based on superconducting electrical oscillators, such as those used in the quantum chips in Wallraff's lab (and also by IBM and Google), need to be cooled down to temperatures close to the absolute zero of -273,15 degrees Celsius. This supresses thermal perturbations that would cause the quantum states to lose their superposition property - this is known as decoherence - and hence errors in the quantum calculations to occur.

"The challenge was to connect two of those superconducting quantum chips in such a way as to be able to exchange superposition states between them with minimal decoherence", says Philipp Kurpiers, a former PhD student in Wallraff's group. This happens by means of microwave photons that are emitted by one superconducting oscillator and received by another. In between, they fly through a waveguide, which is a metal cavity a few centimetres in width, which also needs to be strongly cooled so that the quantum states of the photons are not influenced.

Each of the quantum chips is cooled down over several days in a cryostat (an extremely powerful refrigerator), using compressed and also liquid helium, to a few hundredths of a degree above absolute zero. To that end, the five-metre waveguide that creates the quantum link was equipped with a shell consisting of several layers of copper sheet. Each of those sheets acts as a heat shield for the different temperature stages of the cryostat: -223 degrees, -269 degrees, -272 degrees and finally -273,1 degrees. Altogether, those heat shields alone weigh around a quarter of a tonne.

"So, this is definitely not a "table-top" experiment anymore that one can put together on a small workbench", Wallraff says. "A lot of development work has gone into this, and ETH is an ideal place for building such an ambitious apparatus. It's a kind of mini-CERN that we first had to build over several years in order to be able to do interesting things with it now." Apart from the three PhD students who carried out the experiments, several engineers and technicians, also in the workshops at ETH and at the Paul Scherrer Institute (PSI), were involved in producing and constructing the quantum link.

The physicists at ETH not only showed that the quantum link can be sufficiently cooled down, but also that it can actually be used to reliably transmit quantum information between two quantum chips. To demonstrate this, they created an entangled state between the two chips via the quantum link. Such entangled states, in which measuring one qubit instantaneously influences the result of a measurement on the other qubit, can also be used for tests in basic quantum research. In those "Bell tests", the qubits must be far enough apart from each other, so that any information transfer at the speed of light can be ruled out.

While Wallraff and his collaborators are performing experiments with the new link, they have already started working on even longer quantum links. Already a year ago they were able to sufficiently cool down a ten-metre link, but without doing any quantum experiments with it. Now they are working on a 30-metre quantum link, for which a room at ETH has been specially prepared.