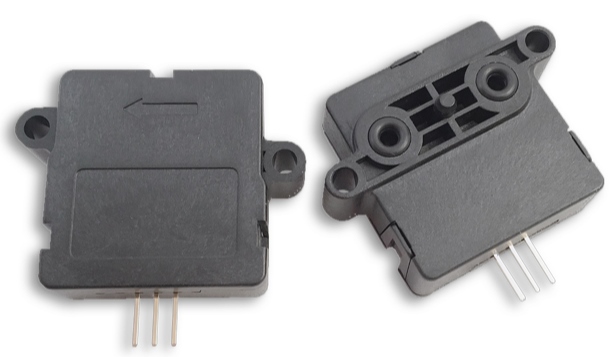 Featuring compact robust packages, the PMF6000 series sensors were developed specifically for users wanting the flexibility of designing their own flow body and restrictor element. The devices' manifold-mount design eliminates the need for hoses and external connections, reducing the overall system size and the number of potential leak points.

By utilizing the linearized factory calibration provided by Posifa, users can create master calibration curves specific to their custom bypass design with minimal additional corrections in the production process. Unlike off-the-shelf solutions, PMF6000 series sensors provide users with a competitive edge by allowing them to perform their own calibration and maintain the values within the company.

The devices feature Posifa's third-generation thermal flow die, which uses a pair of thermopiles to detect changes in temperature gradient caused by mass flow. The result is excellent repeatability and accuracy of 4 % reading typical. The solid-state thermal isolation structure on the sensor die eliminates the need for a surface cavity or fragile membrane used in competing technologies, making the sensor resistant to clogging and pressure shock.

Samples and production quantities of the PMF6000 mass air flow sensors are available now. Further information is available at https://posifatech.com/mass-air-flow-sensors/.