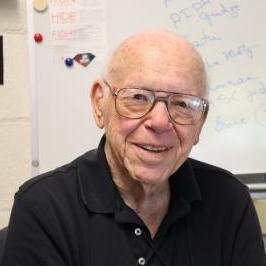 Harry Hilton is a professor of aerospace engineering at the University of Illinois.

When designing flying vehicles, there are many aspects of which we can be certain but there are also many uncertainties. Most are random, and others are just not well understood. University of Illinois Professor Harry Hilton brought together several mathematical and physical theories to help look at problems in more unified ways and solve physical engineering problems.

"There are many equations because there are many phenomena. They are an attempt to describe mathematically the physical phenomena so that you can solve these problems. Words alone won't solve the problem. In this case, the problem is how do to build the perfect flying vehicle for specific missions and purposes," said Harry Hilton, a professor emeritus in the Department of Aerospace Engineering in the College of Engineering at the University of Illinois at Urbana-Champaign. Hilton looked at models independently of each other, then put them together.

"If you don't use the right model, the rest becomes an exercise in futility. It may be a model that's self-consistent but has no reality," he said. "Of course, the only way you can validate a model is to run experiments and even then, you're introducing another reality into the picture which is the experiment and not the real airplane. So each one of these is an idealization."

Hilton began by analyzing the da Vinci-Euler-Bernoulli theory of elastic bending. "It's deterministic, that is, determined that it is true with a probability of 1, based on a set of equations that give a set of answers," Hilton said. Added to that is the Timoshenko theory that takes load and other realistic properties such as wind shear into consideration. Hilton merges those theories with properties of viscoelastic materials--which includes time dependent material behavior and is of particular importance in modern composite materials and metals at elevated temperatures.

On top of it all, there are probabilities that certain things will happen.

"We may assume that the loads and material properties are certain, but they're not. Think about wind gusts. They can be sudden and unpredictable in strength and direction," he said. "It's the difference between deterministic - which means the probability is one and events are going to happen as opposed to a probability between zero and 1 where zero is never and 1 is always. "Probability happens in the real world. What's the probability of you getting hit by a car when you cross Green Street? Pretty high. When you cross Wright Street, maybe not as likely," he said.

Hilton's analysis provides a new model that takes into consideration as many, but still not all, known phenomena. These analyses, while more inclusive, form a linear beginning as a stepping stone to the real nonlinear random world.

"We use both math and physics in engineering, but within limitations. In physics, we don't always understand what's going on," he said. "That's the case here as well. There are pieces of principles that haven't been resolved. The mathematics are very exact but we tend to shade the equations in terms of what we can solve, rather than what it should be.

"The probabilistic analyses really pay off when designing a missile because you have just one flight to get it right. Either it hits the target or it doesn't. But it never comes back and is reused."

About his merging of models and its potential impact, Hilton quoted Winston Churchill from a speech he gave in 1942 concerning the Second Battle of El Alamein. "Churchill said, 'It's not the beginning of the end but the end of the beginning.' You could look at it that way. We're so far from the total knowledge that any one of these types of fundamental analytical papers is an end of the beginning."