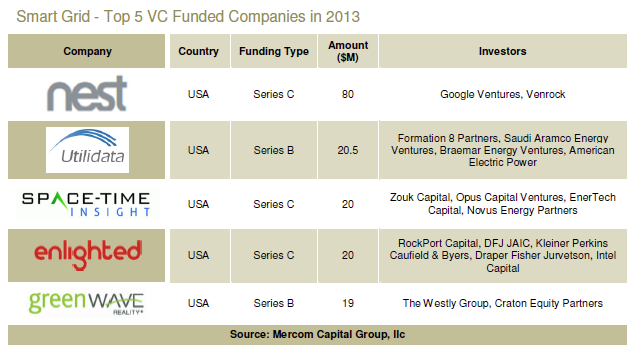 Mercom Capital Group, a global clean energy communications and consulting firm, released its report on funding and mergers and acquisitions (M&A) activity for the smart grid sector for 2013.

“Deal activity picked up towards the end of the year, and after a long pause, IPOs have made a comeback,” commented Raj Prabhu, CEO and Co-Founder of Mercom Capital Group. “After half a billion dollars of VC investments into home energy companies, the market is finally coalescing around connected home packages as convenience is seen as a better sell with consumers. A single vendor offering a bundle with cable, security, phone and other services and no upfront costs, has removed the barrier for these technologies to find their way into homes.”

There were three IPOs in 2013 (including one in the fourth quarter), raising a combined $162.3 million. Silver Spring Networks, a networking platform and solutions provider for smart energy networks, raised $81 million in its March IPO. Control4, a provider of automation and control solutions for the connected home, raised $64 million through its IPO, and Ideal Power, a developer of a disruptive power converter technology for solar, electric vehicle charging, and commercial grid storage markets, raised $17.3 million in its IPO.