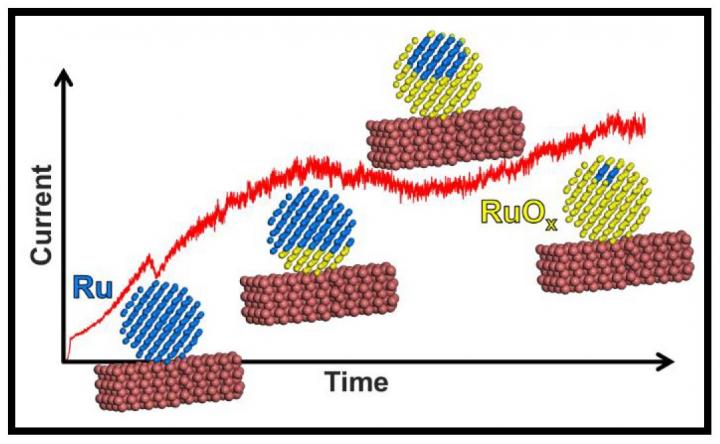 The ruthenium nanocluster (Ru) is attached to a support structure and heated to 200oc. Over time, the metal reacts with oxygen in the air, forming ruthenium oxide (RuOx). This reaction is detected by the support structure as a shift in current, helping to explain the underlying catalytic process.

A catalyst's utility is influenced by its surface charge and how that charge is transferred. Until recently, studying charge transfer has relied on complex imaging techniques that are both expensive and time-consuming. Scientists at the Okinawa Institute of Science and Technology Graduate University (OIST) report an approach for studying charge transfer that does not rely on complicated equipment -- simplifying the real-time observation of catalysis.

The team describes an experimental setup using a tiny ruthenium catalyst, a nanocluster, that reacts with oxygen in the air when heated to high temperatures. This oxidation reaction is detected by a support structure attached to the catalyst that provides a live readout to a computer. Ruthenium can be used to detect breath acetone, which is a biomarker for various disease states, but this setup also has wider value in demonstrating exactly how catalysts facilitate a reaction.

"Essentially, the attached support structure detects a change in current, corresponding to a change in the catalyst nanocluster," explains Dr. Alexander Porkovich, first author of the study, published in ACS Nano. "In this case, that change is a shift in oxidation state as the ruthenium reacts with oxygen."

"When studying charge transfer phenomena, we are interested in the interface between the catalyst and the support -- and this experimental setup is ideal. With such a clean interface, we can be confident that our data accurately captures the unfolding oxidation reaction."

This paper adds to the growing body of literature bringing hidden catalytic activity to light, taking observations in situ -- allowing the reaction to take place unperturbed. These readings, dubbed chrono-conductometric measurements, are a useful evolution in methodology, and they are supplemented with other approaches to validate the ruthenium's shift in structure, chemical ordering, and surface charge. Combined, these techniques provide a complete and reliable picture of the reaction mechanics.

The study also highlights the importance of the ruthenium nanocluster's structure. Ruthenium was bound to the support in two distinct configurations, each exhibiting different mechanics when reacting with oxygen. One structure more fully reacts with oxygen, whereas the other retains an inert core. This raises further questions about how the structure of the nanocluster impacts on catalysis, and which conformation of ruthenium may be better suited to industrial applications.

Understanding charge transfer phenomena also has utility beyond catalysis, including the study of surface plasmons employed in electron microscopy, and materials required in solar energy devices. Exploring these systems with similar in situ, chrono-conductometric measurements could shed further light on important industrial processes.