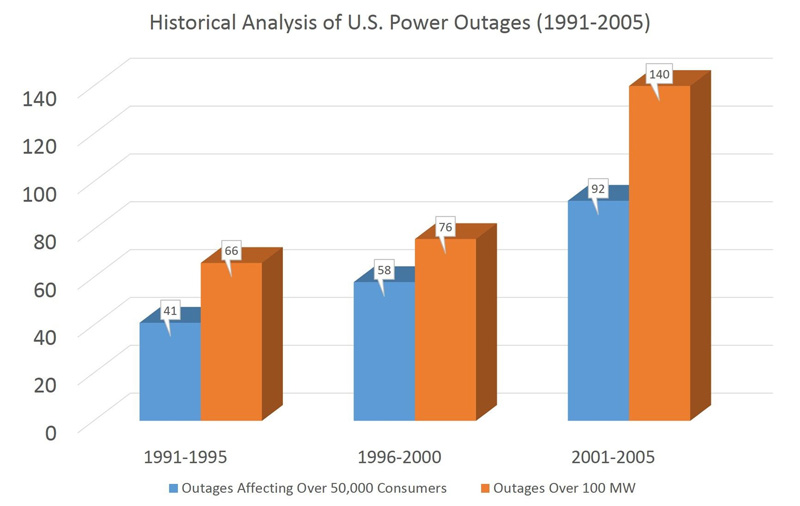 In the wake of increasing blackouts and brownouts, and particularly after the recent power outages caused by Hurricane Sandy, the need for a more reliant grid is undeniable. One solution is to consider parallel or isolated systems that consist of energy generation, storage, distribution, and management. These systems—microgrids—operate either independently or parallel to the main grid, and help ensure reliable energy supply for consumers while also reducing the stress felt by the larger transmission and distribution system. Power outages cost the U.S. approximately $104-$164 billion annually, half of which are specifically felt by the industrial sector and digital economy. Even brief outages can damage equipment or idle labor, which wastes critical resources, and losses can have further effects for downstream firms. Losses from outages are increasing over time due to congestion and a lack of investment in transmission infrastructure. In the second half of the 1990s, there were 41% more outages than in the first half affecting 50,000 or more consumers. Further, U.S. power outages affecting 50,000 or more customers rose from 197 to 312 from the 2001-2005 period to the 2006 to May 2010 period (see Figure 1). There is a clear need for a stronger electrical grid. Microgrids offer substantial resiliency and cost-savings benefits. Governments, businesses, and educational institutions are exploring microgrid technology as a potential avenue to securing a more reliable energy future. 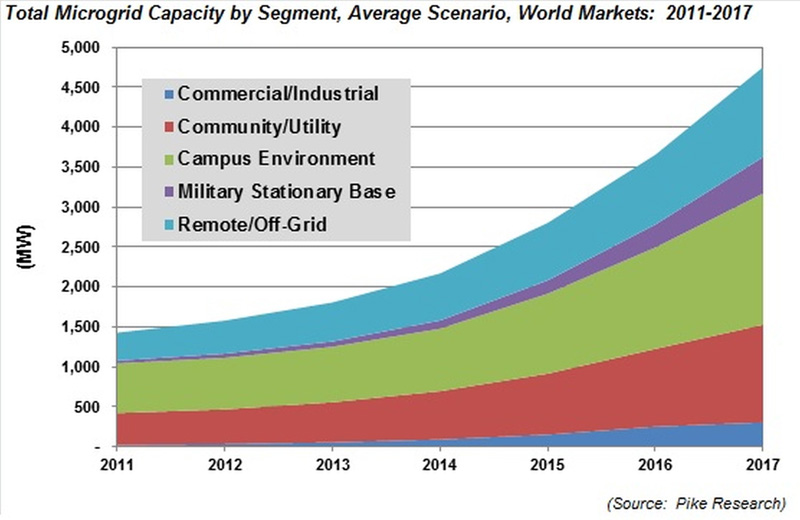 Market Drivers and Technology There are critical factors that drive demand for microgrids, including cyber security, growing energy demand, and the general need for a more secure electricity supply. Reliance on modern technology continues to increase, which makes power systems vulnerable to cyber attacks with particularly drastic implications for large-scale interconnected power grids the systems upon which they rely. Reducing outages and increasing quality of energy supply can significantly benefit sectors that are reliant upon constant power supply, such as data centers, infrastructure critical to national security, and critical service providers such as hospitals. Microgrid power generation includes a mix of renewable and nonrenewable sources. This includes, but is not limited to fossil-fuel-fired generators or turbines, and renewable sources such as solar PV and wind turbines. Integration of cogeneration - combined heat and power (CHP) - and trigeneration systems - combined cooling, heat, and power (CCHP) - can further microgrid system efficiency and cost-effectiveness. As grid-scale energy storage technology continues to improve, so does its capacity to smooth and complement renewable power generation, and provide cheaper peak-demand power. Also, in the case of an unpredicted utility grid outage, stored energy can provide momentary power bridging as microgrid system generators come on line. Recent Applications and Success Stories Utilities Electric utilities have approached microgrids in a variety of ways. While some remain skeptical, many have moved forward with projects despite significant obstacles. U.S. utilities that have pursued microgrid activities include San Diego Gas & Electric (SDG&E), American Electric Power (AEP), Sacramento Municipal Utility District, DTE Energy, and Consolidated Edison. However, because the most prominent obstacle for utilities in this case is justifying costs passed on to ratepayers, the business case still needs to be thoroughly explored and quantified. Campuses Institutional campuses are also beginning to implement microgrids to help reduce energy use. According to Pike Research, total installed generation capacity strictly for campus microgrids will increase by 164 percent from 2011 to 2017. The market for campus microgrids could reach $777 million by 2017. Figure 2 shows the potential increase in campus microgrid planned capacity from 2011 through 2017. Santa Clara University Santa Clara University became one of the first universities in the Bay Area to launch a smart microgrid, a project that is estimated to reduce energy consumption by 50 percent and to save approximately 20 percent in energy costs. Consisting of a 1-megawatt solar PV system, a wind turbine, a 60-collector solar thermal system, and a smart microgrid system that regulates the campus sources, the Santa Clara University system will manage and optimize energy on the campus from production to storage to consumption. Not only is the university able to better manage its energy sustainability and reliability, but the system gives them the best return on investment for its 106-acre campus. The university has been able to grow its campus size by 30% while still reducing energy costs and use. The Military Military bases are seeking to maintain operations despite disruptions in the larger grid as the U.S. Department of Defense (DoD) works to mitigate energy security threats. More than 40 DoD military bases currently either have operating or planned microgrids, or have pursued demonstrations or studies, according to the Secretary of Defense. Pike Research projections indicate that U.S. military microgrids for stationary bases could potentially reach 54.8 megawatts by 2018. In May 2013, the U.S. Army launched its first grid-connected microgrid demonstration at Fort Bliss, Texas, integrating renewable resources and energy storage. The $2.4 million project, funded through the DoD's Environmental Security Technology Certification Program, will integrate 120 KW of solar, 300 KW of energy storage, grid interconnection, on-site backup generators, and a control system. The project aims to reduce greenhouse gas emissions and energy costs while also offering energy security benefits by allowing the base to operate off the grid, reducing risk of power outages and cyber security attacks. Costs will be lower and energy storage will enable peak-demand to be met. The demonstration phase is set to continue through July. Key Takeaways The market for microgrids in the U.S. is moving towards full-scale commercialization. There are not only reliability and security benefits, but revenue generation, cost-savings, and emissions reduction opportunities as well. There remains tremendous potential particularly for industrial and educational campuses as well as the commercial and industrial sectors. As governments continue to aim to meet clean energy deployment goals while reducing energy costs, microgrids offer an attractive option. Energy Solutions Forum References: Asmus, Peter, 2012. "Evolving Microgrids: What About Utilities?" Navigant Research Blog. Kremers, Enrique. "A Complex Systems Modelling Approach for Decentralized Simulation of Electrical Microgrids." A Complex Systems Modelling Approach for Decentralized Simulation of Electrical Microgrids. AnyLogic, Mar. 2010. Web. 09 Aug. 2013. Navigant Research, 2013. Market Data: Microgrids. Forecasts for Commercial/Industrial, Commercial/Utility, Campus/Institutional, Military, and Remote Microgrids: 2013-2020. "U.S. Energy Information Administration - EIA - Independent Statistics and Analysis."Electricity Storage Technologies Can Be Used for Energy Management and Power Quality. U.S. Energy Information Agency, 14 Dec. 2011. Web. 09 Aug. 2013. 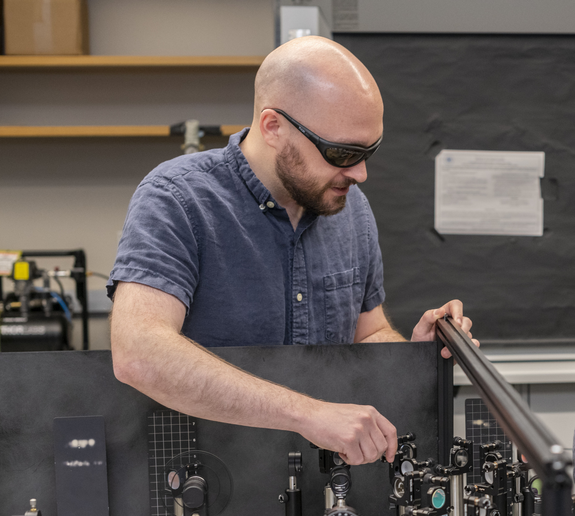