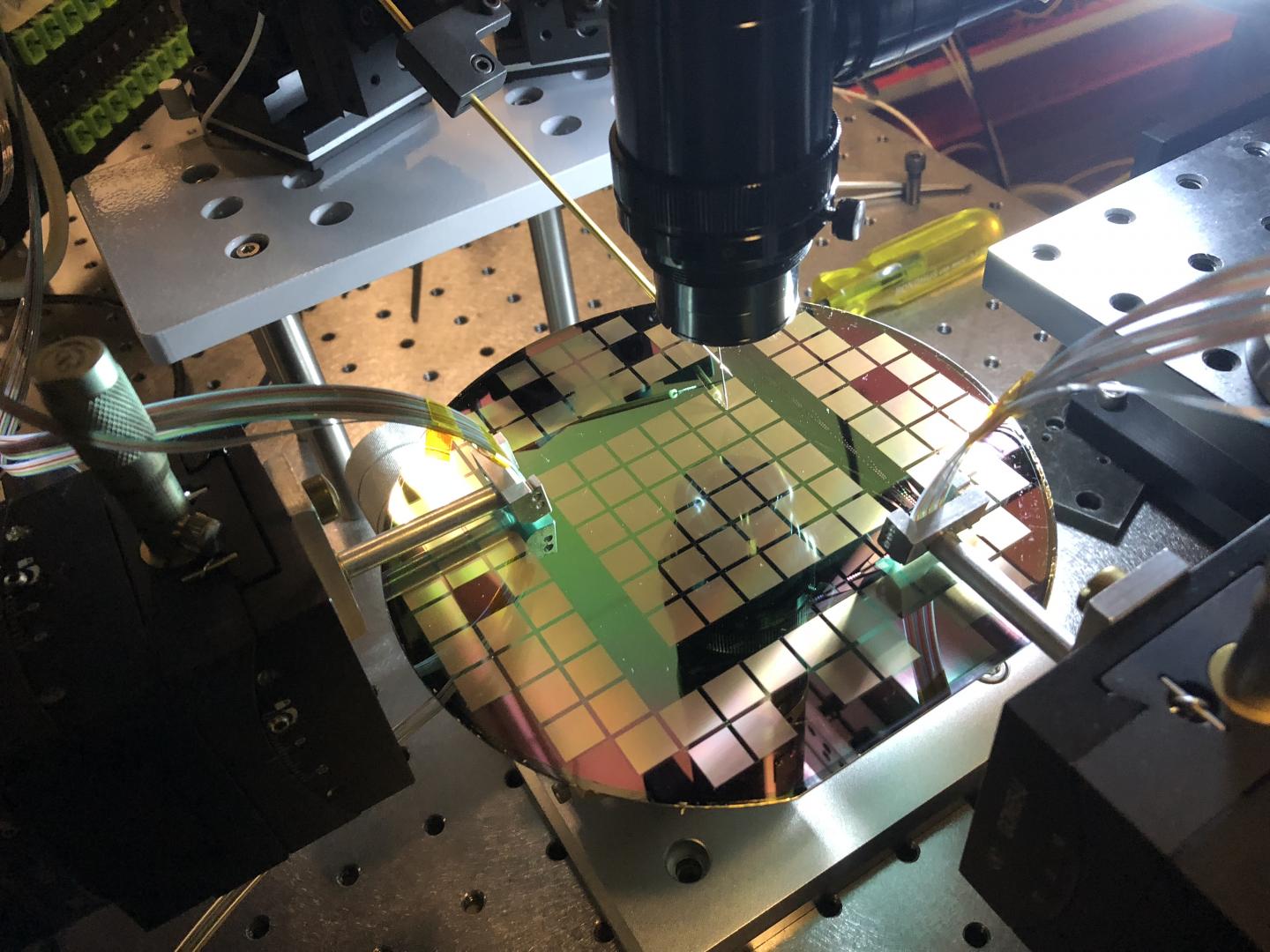 The photonic switch is manufactured using a technique called photolithography, in which each "light switch" structure is etched into a silicon wafer. Each light gray square on the wafer contains 6,400 of these switches.

Engineers at the University of California, Berkeley have built a new photonic switch that can control the direction of light passing through optical fibers faster and more efficiently than ever. This optical "traffic cop" could one day revolutionize how information travels through data centers and high-performance supercomputers that are used for artificial intelligence and other data-intensive applications.

The photonic switch is built with more than 50,000 microscopic "light switches," each of which directs one of 240 tiny beams of light to either make a right turn when the switch is on, or to pass straight through when the switch is off. The 240-by-240 array of switches is etched into a silicon wafer and covers an area only slightly larger than a postage stamp.

"For the first time in a silicon switch, we are approaching the large switches that people can only build using bulk optics," said Ming Wu, professor of electrical engineering and computer sciences at UC Berkeley and senior author of the paper, which appears WHEN in the journal Optica. "Our switches are not only large, but they are 10,000 times faster, so we can switch data networks in interesting ways that not many people have thought about."

Currently, the only photonic switches that can control hundreds of light beams at once are built with mirrors or lenses that must be physically turned to switch the direction of light. Each turn takes about one-tenth of a second to complete, which is eons compared to electronic data transfer rates. The new photonic switch is built using tiny integrated silicon structures that can switch on and off in a fraction of a microsecond, approaching the speed necessary for use in high-speed data networks.

Traffic cops on the information highway

Data centers -- where our photos, videos and documents saved in the cloud are stored -- are composed of hundreds of thousands of servers that are constantly sending information back and forth. Electrical switches act as traffic cops, making sure that information sent from one server reaches the target server and doesn't get lost along the way.

But as data transfer rates continue to grow, we are reaching the limits of what electrical switches can handle, Wu said.

"Electrical switches generate so much heat, so even though we could cram more transistors onto a switch, the heat they generate is starting to pose certain limits," he said. "Industry expects to continue the trend for maybe two more generations and, after that, something more fundamental has to change. Some people are thinking optics can help."

Server networks could instead be connected by optical fibers, with photonic switches acting as the traffic cops, Wu said. Photonic switches require very little power and don't generate any heat, so they don't face the same limitations as electrical switches. However, current photonic switches cannot accommodate as many connections and also are plagued by signal loss -- essentially "dimming" the light as it passes through the switch -- which makes it hard to read the encoded data once it reaches its destination.

In the new photonic switch, beams of light travel through a crisscrossing array of nanometer-thin channels until they reach these individual light switches, each of which is built like a microscopic freeway overpass. When the switch is off, the light travels straight through the channel. Applying a voltage turns the switch on, lowering a ramp that directs the light into a higher channel, which turns it 90 degrees. Another ramp lowers the light back into a perpendicular channel.

"It's literally like a freeway ramp," Wu said. "All of the light goes up, makes a 90-degree turn and then goes back down. And this is a very efficient process, more efficient than what everybody else is doing on silicon photonics. It is this mechanism that allows us to make lower-loss switches."

The team uses a technique called photolithography to etch the switching structures into silicon wafers. The researchers can currently make structures in a 240-by-240 array -- 240 light inputs and 240 light outputs -- with limited light loss, making it the largest silicon-based switch ever reported. They are working on perfecting their manufacturing technique to create even bigger switches.

"Larger switches that use bulk optics are commercially available, but they are very slow, so they are usable in a network that you don't change too frequently," Wu said. "Now, computers work very fast, so if you want to keep up with the computer speed, you need much faster switch response. Our switch is the same size, but much faster, so it will enable new functions in data center networks."