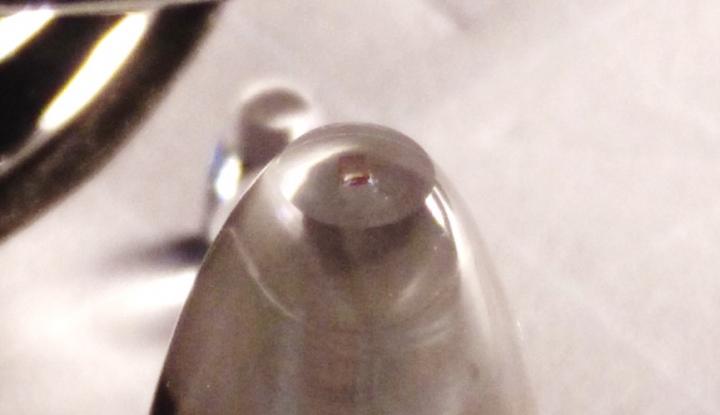 A diamond on a parabolic light collecting lens is the main component of the new angular rate sensor.

Quantum technology is about to make the leap from scientific research to concrete applications. Contributing to this is the new MiLiQuant research project in which businesses and universities are cooperating to develop new applications for quantum technology. The German Federal Ministry of Education and Research (BMBF) will be supporting the project to the tune of approximately EUR 9.4 million over the next three years to early 2022. Johannes Gutenberg University Mainz (JGU) and Robert Bosch GmbH in Gerlingen are partners in the MiLiQuant project. Further partners are Q.ant GmbH in Stuttgart, Carl Zeiss AG in Jena, Nanoscribe GmbH in Eggenstein-Leopoldshafen, and Paderborn University.

In the collaborative project MiLiQuant, short for "Miniaturized light sources for use in industrial quantum sensors and quantum imaging devices", the researchers enhance diode laser beam sources so that they can be employed in industrial quantum technology applications. The goal is to develop miniaturized, frequency- and power-stable beam sources that can also be used outside laboratories. These core technologies are being customized to meet the requirements of specific applications in quantum sensor technology and quantum imaging.

Miniaturized light sources are required in industrial sensors and imaging systems. The participants in the collaborative project are focusing on the research and development of compact industrial light sources with output powers of up to one watt. Such light sources either directly employ quantum mechanical phenomena themselves or enable quantum mechanical effects to be harnessed. To demonstrate the feasibility of quantum sensors, scientists of the Quantum, Atomic, and Neutron Physics (QUANTUM) group at the Institute of Physics at JGU and Robert Bosch GmbH are developing two gyroscopes or angular rate sensors, one use of which may be to ensure driverless vehicles remain in the same lane. "We are developing one sensor based on nuclear spin comagnetometry with alkali gas cells, while another is based on color centers in diamonds," explained Dr. Arne Wickenbrock, a researcher in QUANTUM and at the Helmholtz Institute Mainz (HIM). "The latter, in particular, offers great potential for miniaturization."

Other possible applications to be developed through the collaborative project include the utilization of diamond-based sensors in medical diagnostics to detect, for instance, brain and nerve activity during surgery, quantum sensors for non-invasive monitoring of neural activity and heart rate in unborn babies, and reduced-radiation microscopy in the mid-infrared range.