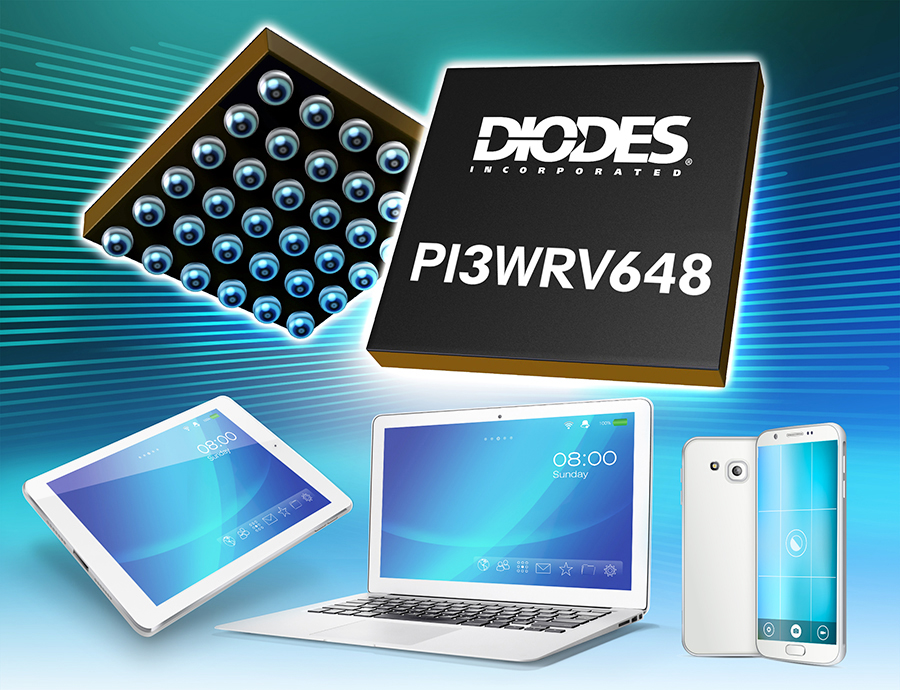 Plano, Texas – Diodes Incorporated announced the PI3WVR648GEAEX five-lane MIPI 2:1 switch, capable of switching physical layers that comply with either C-PHY or D-PHY serial interfaces, as defined by the industry standard specification for image sensors and cameras in smartphones and displays in mobile applications.
As smartphone and portable device manufacturers integrate to camera modules with higher resolution and speed, it is becoming more necessary to support high-speed (HS) MIPI. However, supporting low-power (LP) MIPI is equally important in battery-powered applications. The PI3WVR648GEAEX supports both HS and LP MIPI, allowing connected modules to switch between both standards without incurring delays or signal degradation.
The PI3WVR648GEAEX offers fast switching among its five lanes, arranged as 10 channels in a single-pole, double-throw configuration. The 2:1 multiplexing allows rapid switching between HS and LP MIPI physical interfaces. A typical use is to connect two MIPI-compliant devices to a single module with a C-PHY or D-PHY interface, such as a multi-camera smartphone.
With support for four data lanes with one clock lane in D-PHY or three data lanes in C-PHY, the PI3WVR648GEAEX can sustain data rates of up to 4.5Gbps (D-PHY) and 3.5Gsps (C-PHY) with a total bandwidth of 6.0GHz, low crosstalk of -28dB at 2.25GHz, and off-isolation of -23dB at 2.25GHz.
The PI3WVR648GEAEX can switch both HS and LP PHY specifications with a maximum propagation delay of just 0.25ns. It operates at a supply voltage of between 1.5V and 5V, with a switch-on resistance of 5Ω for HS and LP MIPI signals.
The PI3WVR648GEAEX is available in a 36-pin WLCSP and priced at $0.90 each in 3000 piece quantities.
Further information is available at http://www.diodes.com.