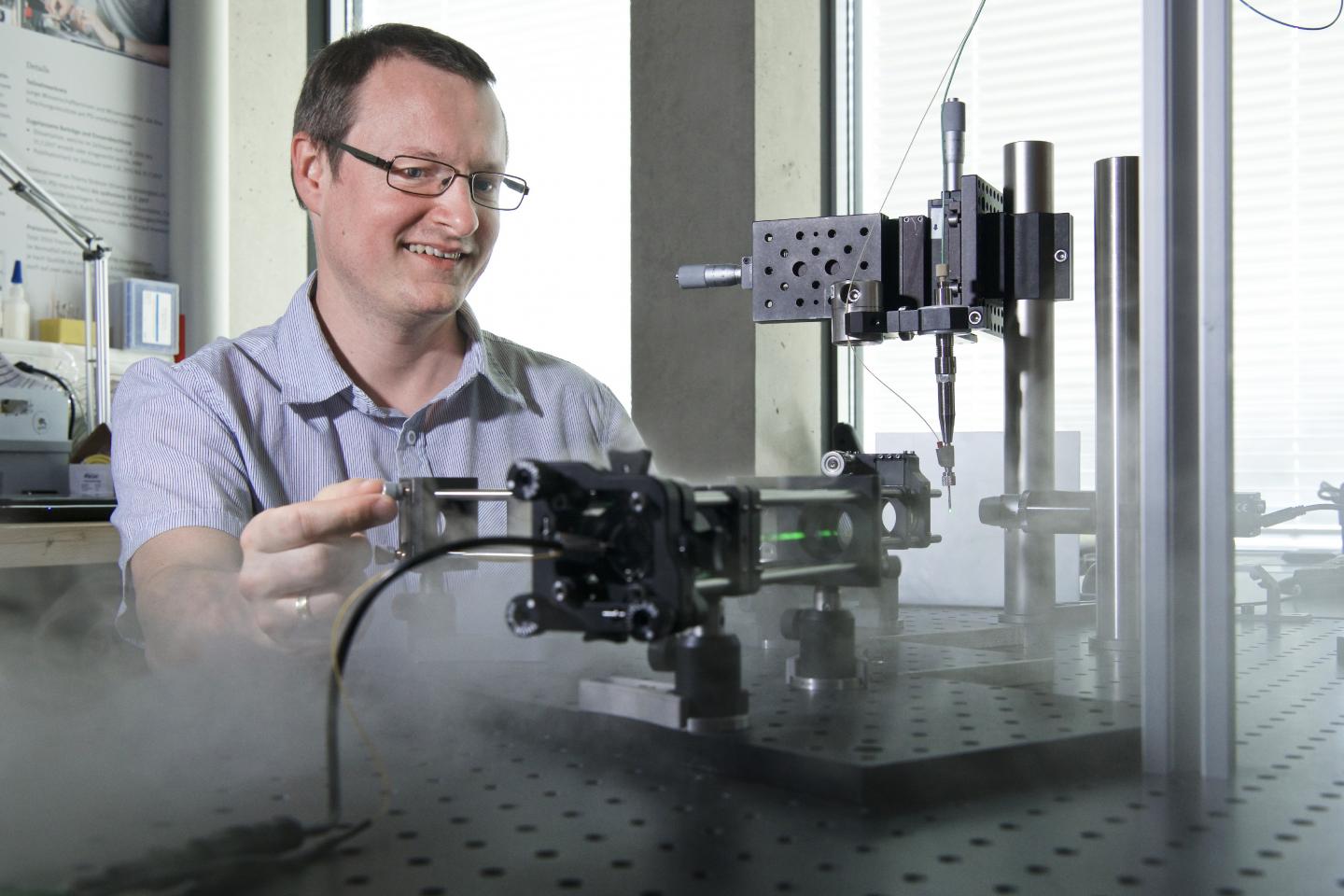 Tobias Weinert, biochemist at PSI, with the experimental set-up for the 'excitation query' crystallography at the SLS: An injector produces a 50 micrometer (like a hair) thin stream of a toothpaste-like mass with the protein crystals grown in it. A small laser diode, comparable to a conventional laser pointer, is guided over mirrors and lenses and focused to the same point where the X-ray beam of the SLS hits (not in the picture). For the photo, the laser was made visible by liquid nitrogen. In the experiment, the laser is then activated for a short moment, followed by the X-rays for the molecular film.

Researchers at the Paul Scherrer Institute PSI have used the Swiss Light Source SLS to record a molecular energy machine in action and thus to reveal how energy production at cell membranes works. For this purpose they developed a new investigative method that could make the analysis of cellular processes significantly more effective than before. They have now published their results in the journal Science.

In all living things, structural changes in proteins are responsible for many biochemically controlled functions, for example energy production at cell membranes. The protein bacteriorhodopsin occurs in microorganisms that live on the surface of lakes, streams, and other bodies of water. Activated by sunlight, this molecule pumps positively charged particles, protons, from the inside to the outside through the cell membrane. While doing this, it is constantly changing its structure.

PSI researchers were already able to elucidate one part of this process at free-electron X-ray lasers (FELs) such as SwissFEL. Now they have also managed to record the still unknown part of the process in a kind of molecular movie. For this they took a method that had previously been usable only at FELs and further developed it for use at the Swiss Light Source SLS. The study underlines the synergy between the analytical options at these two large-scale research facilities at PSI. "With the new method at SLS, we can now follow the last part of the movement of bacteriorhodopsin, where the steps are in the millisecond range", explains Tobias Weinert, first author of the paper. "With measurements at FELs in the USA and Japan, we had already measured the first two sub-processes before SwissFEL was commissioned", Weinert says. "These take place very fast, within femtoseconds to microseconds." A femtosecond is one-trillionth of a second.

To be able to observe such processes, the researchers use so-called "pump-probe" crystallography. With this method, they can take snapshots of protein movements that can then be assembled into movies. For the experiments, proteins are brought into crystal form. A laser beam, imitating sunlight, triggers the sequence of movements in the protein. X-rays that hit the sample afterwards produce diffraction images, which are recorded by a high-resolution detector. From these, computers generate an image of the protein structure at each point in time.

The movie created from the measurements at SLS shows how the structure of the bacteriorhodopsin molecule changes in the next 200 milliseconds after it is activated by light. With that, a complete so-called "photocycle" of the molecule has now been elucidated.

Bacteriorhodopsin functions as a biological machine that pumps protons from inside the cell through the membrane to the outside. This creates a concentration gradient at the cell membrane. On its outer side, there are more protons than on its inner side. The cell uses this gradient to gain energy for its metabolism by allowing protons elsewhere to balance out the externally and internally different concentrations. In doing so, the cell produces ATP, a universal energy source in living things. Subsequently, bacteriorhodopsin restores the concentration gradient.

"In the new study, we were now able to see the largest real-time structural changes in a molecule ever" - by "large" the scientist means nine angstroms, that is, one-millionth of the thickness of a human hair. Through these structural changes, a gap opens up in the protein in which a chain of water molecules forms, and this is responsible for the proton transport through the cell membrane. "Before us, no one had ever observed this water chain directly", the biochemist notes happily.

These observations were made possible only by the modification of the method previously employed at SwissFEL for use at SLS, and thanks to the new high-resolution and fast "Eiger" detector at SLS. Weinert is certain the new method for investigation by means of synchrotrons like SLS will inspire research worldwide. "Researchers can use the new method and become much more efficient, since worldwide there are many more synchrotrons than free-electron lasers. Besides that, you need fewer protein crystals than are required for experiments at FELs", Weinert adds.

However, for the very fast molecular processes, and to get especially sharp images and precise results, the researchers rely on SwissFEL. "The processes at the beginning of the photocycle take place in a matter of femtoseconds. It is only possible to observe such rapid chemical reactions at FELs." In addition, structures can be recorded with higher resolution at FELs. Because so many photons hit the sample at once at the linear accelerator, the detector can capture an extremely sharp image.

Weinert emphasises the synergy between the two large-scale research facilities: "At SwissFEL, only a small amount of beamtime is available. With the measurements at SLS, we can make sure in advance that our experiment at SwissFEL will be successful. This boosts efficiency."