For the first time scientists have created a way to model the interaction between light and twisted molecules, as these molecules transition from left- to right-handed versions 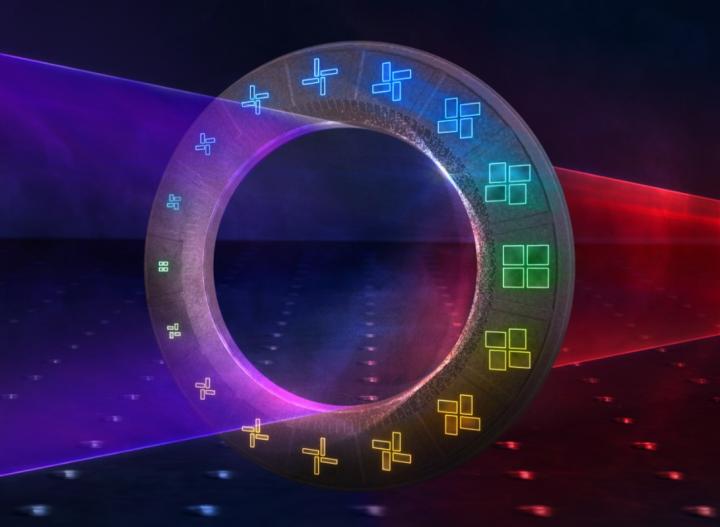 An impression of a chiral molecule moving through various configurations as it transitions from one handedness to another.

For the first time scientists have created a way to model the interaction between light and twisted molecules, as these molecules transition from left- to right-handed versions, or vice versa. The transitional forms offer a deeper insight into material symmetries and their unexpected behaviour could lead to improved design of telecoms components.

Many molecules, including important pharmaceuticals and valuable chemicals, exist in two "chiral" forms - they have the same chemical structure arranged in mirror images, termed left-handed and right-handed forms. This can alter their properties and is therefore important to fully understand how the compound interacts with other molecules, or light.

Typically, it has only been possible to study either the left- or right-handed chiral form but nothing in between, however ideally scientists would like to gradually morph a shape from one handedness to the other and observe how the effects of this change translate into physical properties.

Now a research team from the Department of Physics at the University of Bath, working with colleagues at University College London, Belgium and China, has created a way to do exactly that.

PhD student Joel Collins said: "We were able to follow the properties of a chiral artificial molecule, as it was morphed from left- to right-handed form, through two different routes. No-one has done this before. Surprisingly, we found that each route leads to a different behavior.

"We measured the difference in absorption of left and right circularly polarized light, known as circular-dichroism (CD). Along one route, the artificial molecules behaves as might be expected, with progressively decreasing CD, and eventually a reversal of the CD, for the mirrored structure. However, along the second route, the CD reversed several times, even before the structure changed handedness."

The research is published in the journal Advanced Optical Materials.

Dr Ventsislav Valev who led the research said: "This is actually a very elegant idea but it has only become a possibility thanks to the recent advances in nanofabrication.

"In chemistry, you can't tune the twist of a chiral molecule, so every scientist who studies such molecules needs to tune the wavelength of light. We have demonstrated a new, complementary physical effect, where we fix the wavelength and tune the twist of the chiral artificial molecule. In many cases, our approach is more practical; for instance, when we're designing telecoms components, where the optical wavelength is pre-determined."