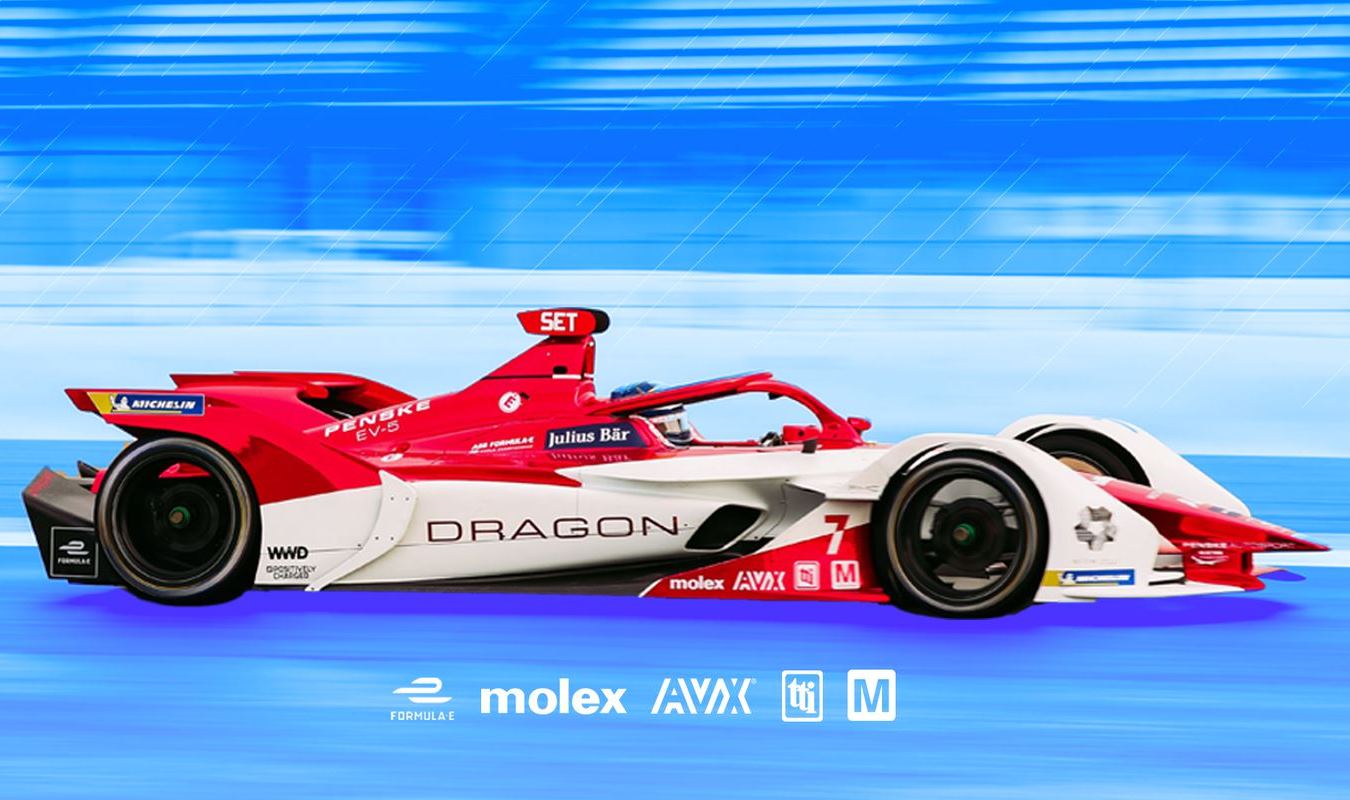 Mouser Electronics, Inc. is delighted to once again partner with the DRAGON / PENSKE AUTOSPORT Formula E team as they kick off the series’ seventh season, and the first Formula E racing season as an FIA World Championship, with double-header races on Feb. 26 and 27. The third consecutive season-opener at Diriyah E-Prix, just outside Saudi Arabia’s capital of Riyadh, also marks Formula E racing’s first night race.

Mouser is partnering with the DRAGON / PENSKE AUTOSPORT team throughout the 2020–21 ABB FIA Formula E World Championship racing season, in collaboration with TTI, Inc. and valued manufacturers Molex and AVX. This is the seventh-straight year that Mouser and Molex have sponsored Formula E racing. The team brings back two familiar faces from last season with a combined 16 races completed between them. Piloting the No. 6 car and coming off his first full Formula E season is Nico Müller, while Sérgio Sette Câmara will be behind the wheel of the No. 7 car.

“Formula E continues to raise the bar on electric motorsports sustainability and performance, and Mouser is excited to have supported the series from its inaugural season to this first season as a World Championship,” said Todd McAtee, Vice President, Americas Business Development for Mouser Electronics. “We are very happy to once again team up with Molex, TTI and AVX to partner with DRAGON / PENSKE AUTOSPORT and to promote these innovative technologies.”

“TTI is pleased to team up with Mouser in supporting this exciting sport and its spotlight on sustainable automotive technologies of the future,” said Mike Morton, TTI Chief Operating Officer.

“This new chapter of Formula E promises to continue the evolution of this thrilling sport and serves as a powerful showcase for its sustainable future,” said Fred Bell, Vice President of Global Distribution for Molex. “Mouser and Molex have been proud supporters since the inception of Formula E, and we wish the DRAGON / PENSKE AUTOSPORT team a very safe and successful season.”

The Formula E series features cars that are powered solely by electricity and represent a vision for the future of the motor sports industry, serving as a framework for research and development around zero-emission motoring. The Gen2 cars offer a huge step forward in electric vehicle racing technology, with maximum power of 250 kW and speeds up to 280 km/h. Racing is all about speed and endurance, and racing partnerships are an innovative way for Mouser to communicate its performance-driven business model and promote the newest technologies from its manufacturer partners.

Fans can cast a vote for Sette Câmara and Müller in FANBOOST, which allows fans to play an active role in influencing the outcome of the race. FANBOOST gives fans the opportunity to vote for their favorite driver and award them an extra boost of power during the race. The five drivers with the most FANBOOST votes are awarded a significant burst of power, which they can deploy in a 5-second window during the second half of the race. FANBOOST voting for the Diriyah E-Prix opens Feb. 22 and is available up to 15 minutes into the race.