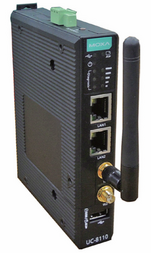 The UC-8100 Series computer and software platform from Moxa will make it much easier for systems providers to offer a complete monitoring service for any and all of their remote field devices. Unveiled at the Solar Power International show in Chicago, the UC-8100 Series will act as a compact, highly flexible, vendor-agnostic data logger that connects to inverters, string combiners, smart meters, and other devices made by any manufacturer, then transmits that data over Ethernet, Wi-Fi, or cellular.

"With this new platform, systems providers won't have to worry about the nuts and bolts of standardized data communication between multiple devices and a central server," said Steve Frank, Business Development Manager for Embedded Computing at Moxa Americas. "We've made that part easy for them so providers can focus their efforts on their ultimate goal - understanding present and future performance of their systems."

Systems performance tracking and management is a hot topic in the solar industry, but it is often technically difficult and expensive to implement, according to Frank. Key to that difficulty is the high number of device types and manufacturers that are typically used in an installation, as well as the logistical challenge of setting up a data communications infrastructure that needs to serve multiple remote outdoor locations.

"We've addressed these needs first by designing the UC-8100 Series to be a common communications platform that is able to connect to nearly any type of device in the field and transmit data over the Internet," said Frank. "Second, we've developed our MXcloud software platform to be an easy-to-deploy central hosting platform that collects data from multiple locations and allows management of the attached devices themselves."

An engineering prototype of the UC-8100 Series computer was available at the show for systems providers, attendees, and media to examine. It has a slim form factor designed for easy DIN-rail mounting and supports remote communications over Ethernet, Wi-Fi, and cellular (through optional PCIe socket). Two LAN ports and up to two serial ports will be available to connect the UC-8100 to inverters, string combiners, smart meters, and other devices. Since the UC-8100 Series will be highly programmable and customizable, it will be able to handle nearly any data collection and communication task for nearly any vendor's device. The most powerful model will feature a 1 GHz CPU and a micro SD slot for additional data storage.

Both the UC-8100 Series computer and the MXcloud software package are scheduled for release in early 2014, and will be very aggressively priced, according to Frank. "Advanced remote monitoring and analytics will be a huge value-add for any systems and software provider, not just those in the solar industry. Our platform will make it extremely easy and cost-effective to establish the necessary infrastructure for those value-added services."